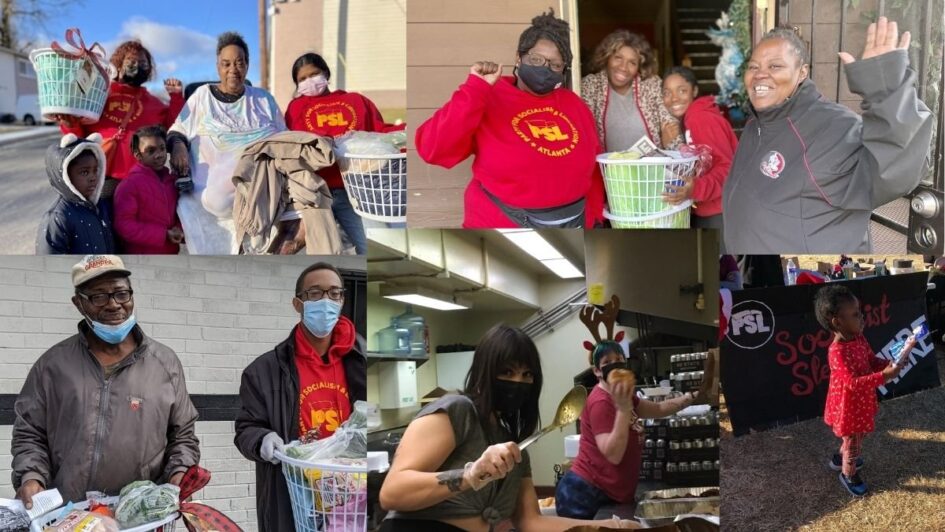 Throughout the holiday season, branches of the Party for Socialism and Liberation have been distributing food, clothing, household essentials and toys and gifts to working people and children around the country.

These actions included coat and clothing distributions, toy and gift drives, serving breakfast in homeless shelters, and providing household essentials to working-class residents. In many cities, the areas where PSL organizers distributed essentials are neighborhoods where they have actively been engaged in eviction defense efforts, tenant organizing, community building and other work.

Organizers in Atlanta stated, “[we organized] to demonstrate that nutritious food and household supplies should not be luxuries. Access to food and safe, healthy housing should be guaranteed rights.”

Almost three years into the pandemic, national, state and local political leaders across the country are continuing to fail the working class, deliberately neglecting and exploiting poor and oppressed people. While tenants wait months for rental assistance, the big banks and corporations received at least five trillion dollars from the federal government over a year ago. Less than 10 percent of the $768 billion Pentagon budget passed earlier in December would cover all unpaid rents in the country.

According to the Guardian, “In the week before Christmas [2020], about 81 million Americans experienced food insecurity, meaning that one in four people in the so-called richest country in the world did not have reliable access to sufficient nutritious food needed for a healthy active life.”

Organizers in the PSL are fighting for a different world — where food, housing, clothing, and other essentials are distributed to everyone in a planned way, based on human needs, and the vast wealth of society is used for the good of working, poor, and oppressed people, not to line the pockets of billionaires. This is true in the holiday season and year-round.

In Albuquerque, PSL members were able to unite with resident volunteers to distribute 300 gift bags full of essential household necessities, along with 40 full holiday meals, complete with chile verde and pan dulce. The holiday distribution took place in the International District, so-called because it is where the State Department relegates most refugee families. Alongside official negligence, the International District is ruled by profiteering slumlords and ranks as one of New Mexico’s worst neighborhoods for health and well-being.

In addition to distributing hundreds of gift bags, the PSL teamed up with dozens of residents and began assisting 30 households with applications for Emergency Rental Assistance funds. Due to COVID-related income losses, $170 million in federal aid was made available to the state of New Mexico for rental and utility assistance back in January 2021. To date, less than half that amount has been dispersed to people that need it! How many have needlessly lost housing due to the failure to quickly disperse all of the available money? This is yet another failure of the capitalist state to respond effectively and efficiently during the pandemic.

On Christmas Eve, PSL Anchorage’s Unity & Survival program launched with a Christmas Breakfast at the nation’s largest homeless shelter, the Sullivan Arena. PSL members partnered with local organizations Sol de Medianoche, 99+1, the Business Boutique, French Oven Bakery, Paris Bakery, and Waffles and Whatnot to serve food to the over 500 people sheltered in the arena. The reaction from residents of the shelter was overwhelmingly positive as hot, fresh food is a rarity at the Sullivan and many were eager to talk about conditions they face.

PSL Anchorage conducted the Christmas Eve Breakfast as a community initiative to support the homeless population as the city of Anchorage has continually failed to do so. The Christmas Eve Breakfast was a continuation of PSL-Anchorage’s mission to serve the people and fight for a solution to homelessness in the city that would make housing a human right. The conditions faced by Anchorage’s disproportionately large homeless population of over 1,100 people are particularly dangerous as the city experiences among the coldest winters of any major city in the United States and has had only one mass shelter available over the past two years.

While the local government has been working to implement a Mass Care Exit Strategy to move people out of the Sullivan Arena and into various forms of permanent housing, those who are living in the Sullivan Arena continue to experience abhorrent and appalling conditions, including overcrowding and a lack of access to indoor bathrooms. PSL organizers in Anchorage call on the municipality to use every available source of funding, including the $51 million the city will be receiving from the American Rescue Plan to ensure that everyone living in Anchorage has their basic human right to housing guaranteed.

On December 19th, the Atlanta branch of the PSL organized its first Socialist Sleigh holiday distribution. 250 gift baskets — 100 holiday meal baskets with whole chickens and fresh greens and 150 household supply baskets — were prepared at the Atlanta Liberation Center in the week leading up to the distribution.

Organizers set off in a car caravan from the Atlanta Liberation Center in the West End and drove through Atlanta and East Point neighborhoods to distribute food and household essentials.

For the past several months, PSL has organized with tenants at complexes in these neighborhoods to fight evictions, rising rents, and slum conditions. Working-class people in Atlanta have faced utility shutoffs, unemployment benefits cuts, evictions and foreclosures throughout the pandemic and long before.

Residents like Shonya Whitmire, who the PSL assisted in preventing her family’s eviction earlier in the year, helped construct and deliver the baskets. “[The residents], some of them are old, they can’t get out, they can’t walk,” said Whitmire while helping to deliver the baskets on her block. Many are united in the belief that two years into a pandemic, the government has failed to meet people’s needs. The holiday distribution was shouldered in the spirit of promoting a vision of a world where food, housing, healthcare and education are guaranteed human rights.

On December 18, organizers with the PSL distributed toys and gifts to kids of all ages out of the Boston Liberation Center in the Roxbury neighborhood. Over 120 families came to the Center, collected gifts, helped make ornaments, and talked with organizers about the ongoing crises for the working class in Boston. Organizers had gathered gifts and raised funds for three weeks before the event.

Children received art supplies, headphones, books, dolls and action figures, gift cards, board games, fashion gear and many other toys and gifts. Organizers also distributed pamphlets about the Boston Liberation Center, and attendees filled out surveys on the needs of the community in Roxbury.

Roxbury is a primarily working-class, historically Black neighborhood of Boston with over 25 percent Spanish-speakers and 25 percent of residents being “foreign-born.” The median income is around $36,000, and many residents work in the service sector, meaning Roxbury residents have disproportionately been impacted by the impacts of COVID and the economic crises.

An organizer spoke during the event: “We know how difficult it gets during the holiday season to have enough money for all of our necessities and gifts for our families. Oftentimes, working mothers and families are forced to choose between getting basic necessities and getting toys and gifts for their children, and the pandemic has only made things worse. Our families and communities are still under the threat of losing jobs, income, and housing. There is no relief, no stimulus checks (which weren’t enough to begin with and weren’t given to all), no cancellation of rents, no cancellation of loans. And what do the millionaires and billionaires in government do about it? They argue with each other and then go on vacation while we are left trying to figure out how to survive!”

‘Malcolm was a revolutionary leader of the working class’