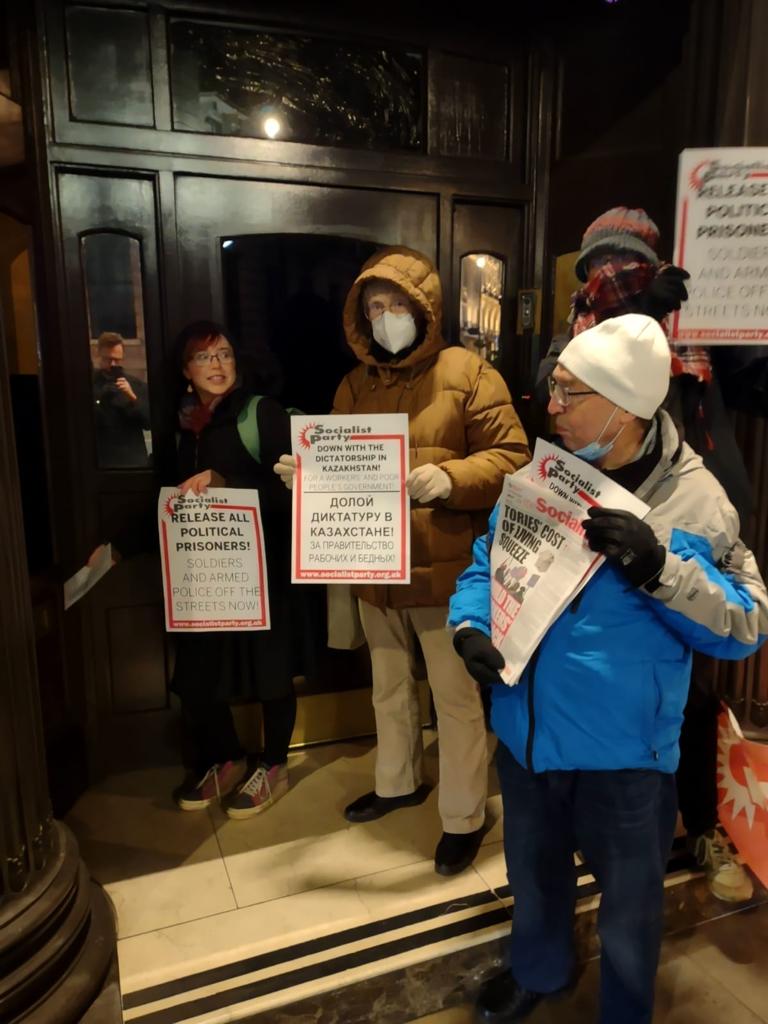 January 7, 2022 – From Socialist World
21 views
There are protests in solidarity with the Kazakhstan movement taking place in several countries. We will be publishing details of these protests and will bring your further details and analysis about the situation in Kazakhstan.
Below is a report of a protest held earlier today at the Kazakhstan Embassy in London, in the UK.
Socialistworld.net 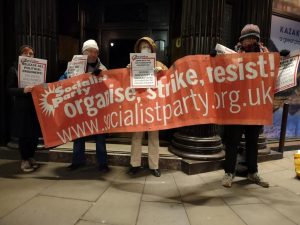 Socialist Party members protested outside the Embassy of Kazakhstan in London today (Friday 7 January), and delivered a letter of protest to the ambassador

Following is the letter that was handed in. Also, see below a message from Cllr Donal O’Cofaigh.

The Socialist Party of England and Wales, part of the Committee for a Workers International, wishes to express our total opposition to the Kazakhstan regime’s brutality towards workers and citizens on the mass protests in Kazakhstan.

We call for an immediate end to the killing and imprisonment of peaceful protesters by the forces of the state. We condemn the intervention of foreign troops and demand their withdrawal. Release all political prisoners now and end all forms of repression!

We support the struggle for an end to dictatorship and a government representing workers and poor people.

The massacre of striking oil workers in Zhanaozen a decade ago is the most infamous episode in the thirty years’ dictatorship of Nursultan Nazarbayev. Now a movement has erupted that aims to rid the country forever of corrupt oligarchs and the politicians who protect them.

Those who wish to fight for their rights and against appallingly low living standards have made their voices heard. They will find a way to get a government that is truly representative of workers and poor people. They will fight to establish genuine socialism and spread it far beyond the borders of Kazakhstan.

Yours in solidarity with Kazakhstan’s workers and those standing for democracy!

General Secretary of the Socialist Party of England and Wales

Section of the Committee for a Workers International

I am writing to you as a cross-community Labour councillor elected to Fermanagh and Omagh District Council in Northern Ireland in relation to the recent overthrow of the Nazarbayev/Tokayev regime.

I wish to state my support for the overthrow of the dictatorship and my hopes that this will lead to basic freedoms being extended to all citizens. As a socialist trade unionist and member of the Committee of a Workers’ International (CWI), and as someone who has for many years taken an active interest in progress in your country, I have appalled at the regime’s brutality to workers and citizens generally.

The massacre of striking oil workers at Zhanaozen is only the most infamous episode. Leading independent Kazakh trade unionists have been repeatedly detained by security forces, forced to serve hard labour sentences, and suffered restrictions to their freedom of movement and expression – all because they are active in seeking to improve the lot of Kazakh workers. Indeed trade unionist members of the CWI have been forced into exile as a result of their fight for pay decency and the health and safety of Kazakh oil workers.

Kazakhstan has immense natural wealth, which free from rapacious imperialism and corrupt dictatorship, could guarantee both an excellent standard of living to all Kazakh citizens but also basic freedoms including civil and democratic rights. I urge the authorities to commit to hold free elections in which all parties, except fascists, can stand candidates and campaign without having to pay fees and with free access to all mass media.

I call for an immediate stop to the killing of peaceful protesters, the release of political prisoners, and an end to repression. I would like to conclude by expressing my outright opposition to intervention by foreign troops.

I appeal through you to those troops to remind them that in the main they come from working-class and poor farmer backgrounds and have much more in common with those peaceful protesters who are on the streets for freedom and an end to poverty in the midst of plenty.

Yours in solidarity with the Kazakhstan workers and those standing for democracy!

Kazakhstan: Notes from activists in Almaty

Communist Party of Mexico: Solidarity with the struggle of the workers of Kazakhstan