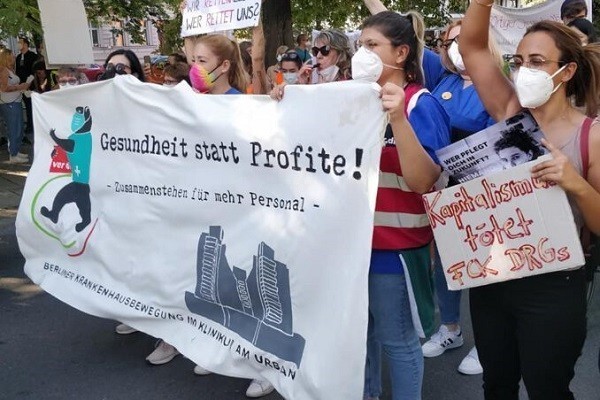 For twenty-six days, nurses at the two largest public Berlin hospital chains, Charité and Vivantes, and the technical staff of the latter, have been on strike. More than 2,000 workers have joined the trade union ver.di since the beginning of the campaign earlier this year which led up to the strikes. The strikers are increasingly frustrated – not least because the governing parties in Berlin – Social Democrats, Greens and the Left Party – all support them in words but do not use their power  (the clinics are owned by the city) to instruct management to accept the more than justified demands of the workers and their trade union.

The striking nurses are demanding a collective bargaining agreement on “relief from strain”. That means they are not fighting for higher wages but for more staff. If more staff are not employed they want compensation in the form of more free time for every shift they have to work with too little personnel. For this, a fixed ratio between nurses and patients should be introduced. The background to this demand is the understaffing of German hospitals and the enormous overload for nurses and other workers.

On top of that, the workers of the outsourced subsidiary companies of the Vivantes clinic are demanding equal pay and conditions via the wages and conditions of the national collective bargaining contract for the public sector. Scandalously, the outsourced workers earn much lower wages than their counterparts who are employed by the parent company.

This “Hospital movement Berlin” is a unique movement because these three sectors – the nurses of two hospital chains and the workers of the subsidiary companies – are fighting together.

On 12 May, they handed over to the Berlin’s ruling Senate a petition signed by 8,397 employees with their demands and set a 100-day ultimatum during which the Berlin “progressive” government could meet the workers’ demands. If not, they promised to take strike action. And so they did! The timing was no accident, as the strike started two weeks before the general election and the simultaneous election of the Berlin federal state parliament.

The strikers and their trade union hoped that the maximum pressure before the elections would force the Berlin city government to make the clinic’s management give in to the pressure. This did not happen. Management has, so far, offered nothing which could be accepted by the workers. In a moving video a few days ago, the strikers explain that they are prepared even to strike “until Christmas” and asked for support.

Sozialistische Organisation Solidarität (CWI Germany) members, together with strikers and activists from the “Network of hospital workers for a fighting ver.di trade union”, initiated a call to the other trade unions to start a solidarity campaign, with mass leafletting in all workplaces, the setting up of a trade union based support committee and the call for a big solidarity demonstration. This appeal was signed by more than 50 strikers within two days and published on Monday, 4 October, as an open letter to the other trade unions.

Alongside this, a demonstration has now been called for next Saturday, 9 October, by the “Health, not profit” alliance which supports the strikers.

We ask all readers of socialistworld.net to send letters of solidarity to this demonstration and to the strikers. Solidarity messages can be sent to: