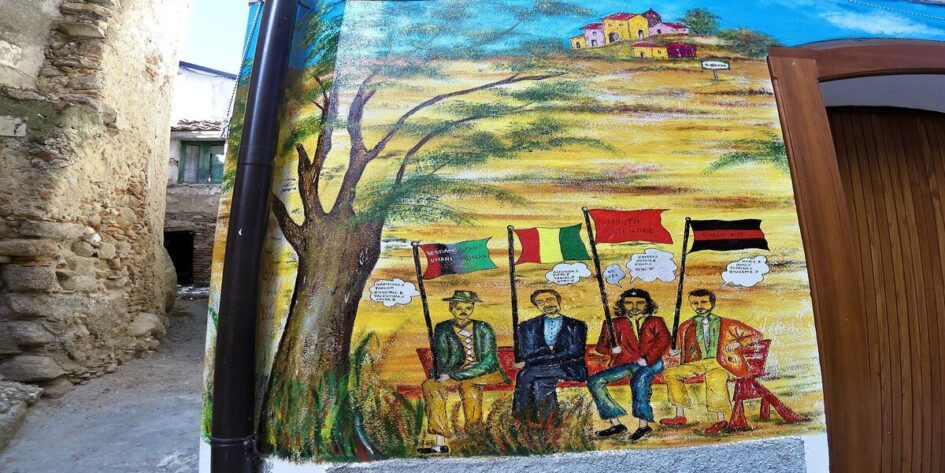 This week Domenico ‘Mimmo’ Lucano, former mayor of Riace, has been given an extremely harsh 13-year prison sentence, following allegations of  aiding illegal immigration. Mr Lucano, who denies the accusation, maintains that everything he did with refugees was in order to rebuild his hometown and offer real solidarity by helping to improve migrants’ lives.

Mimmo Lucano’s resettlement model for supporting migrants became widely known and lauded throughout the world but remained divisive in Italy. Like many such places across high-income countries, Riace, a small town in southern Italy, was at risk of becoming a ghost town as generations of young people left to look for more opportunities and excitement elsewhere. Then, in 1998, with the arrival of a group of Kurdish refugees whose boat ended up at a nearby beach, its future began to change. Instead of sending them packing, the town, under the guidance of Mr Lucano, chose to welcome the migrants and they were allowed to settle in vacant properties.

In 2006, when he was first elected mayor, Lucano set up  government-funded schemes for retraining the newly arrived residents of Riace. By offering migrants homes at the heart of the community, the scheme managed to avoid what most resettlement projects end up fostering – hostility, othering and the ghettoisation of migrant communities. At the same time, economic integration was seen as key for the long-term success of his approach. By setting up various artesanal workshops and spaces for locals and their new neighbours to exchange skills and produce goods together, jobs were created that benefited both groups.

Lucano’s model gained wider recognition during the so-called refugee crisis in Europe in 2016. At the time, around 450 migrants called Riace home and made up a quarter of the population of the town. Lucano was named among the 50 greatest world leaders by Fortune magazine and the training and job provision schemes he helped set up in the town offered a chance for a decent life not just to newly arrived residents but also many of the original locals. At a time when so many communities were closing their doors to people fleeing hardship and oppression, it was Lucano’s vision for a truly welcoming and integrated society that made Riace a success story.

Riace and Lucano under attack

Under the surface, however, the issue of complete dependence on government funding for the success of the local schemes was bound to escalate. Riace had become a visible symbol of solidarity in practice, but this was not seen as positive by everyone. With the reliance of the Riace model on public funding for its programmes, the project of supporting migrants became open to attack from those in power. In 2018, when Matteo Salvini became deputy prime minister and minister of the interior in Italy, he took aim at Lucano in a series of offensive statements. Shortly before his initial arrest in 2018, Lucano was shot at in a local restaurant and his dogs were poisoned.

Sustained pressure on Lucano continued, with allegations ranging from arranging marriages of convenience to embezzlement and misuse of government funds. According to his brother, the marriage story refers to just one instance where he helped a Nigerian woman who was trying to regularise her status but was forced into prostitution in the meantime. And he awarded municipal contracts to migrant-led cooperatives in an attempt to provide them with decent jobs in Italy’s poorest region.

In 2018 after the initial accusations, Lucano said: “I never earned anything, nor did I take money from anyone. Public money in Riace was only used for projects relating to migrants and to ease suffering, for job opportunities, integration and to give a better life to asylum seekers.” Following his legal troubles, Lucano lost his post as mayor and the town is now under a far-right League administration that has already seen the Riace model crumble. In 2020, only about 40 of the migrant households remained in town, fearful of their opportunities and security if they stayed without the support of Lucano.

Although his legal defence denies that the trial and the sentence are politically motivated, in a climate of increasing far-right influence and right-wing rhetoric at all levels of public discourse, it is difficult to escape the conclusion that the government’s hostility towards Lucano played a role.

Solidarity now and in the future

Meanwhile, search and rescue groups and migrants rights organisations have all expressed solidarity with Lucano and this outrageous decision. Sea Watch Italy tweeted:

“The former mayor of Riace gave life and future to his city through welcome and solidarity. We are at the side of Mimmo Lucano and whoever practices solidarity every day.”

This attack on movements of solidarity highlights the need for transformation at all levels of governance and embedding of new economic models in the practice of migrant solidarity. Stagnant local economies and regional depopulation are not issues we can solve quickly, and will require more than the extraordinary drive and energy of exceptional leaders like Mimmo Lucano.

Centuries of imperialist extraction, wars and now climate change are causing and will continue to cause people to uproot their families and seek a better life elsewhere. As they risk their lives and make their way to our shores in Italy, Greece, the UK and elsewhere, we must work together to learn from each other and celebrate each other’s successes, like Riace. We must also stand up for each other, learn the importance of building political power and offer solidarity. This attack on Mimmo Lucano is an attack on all of us who believe in a world without borders.

Alena Ivanova is a campaigns officer at Global Justice Now.

In the name of humanitarianism, Covid is crushing local as well as global solidarity