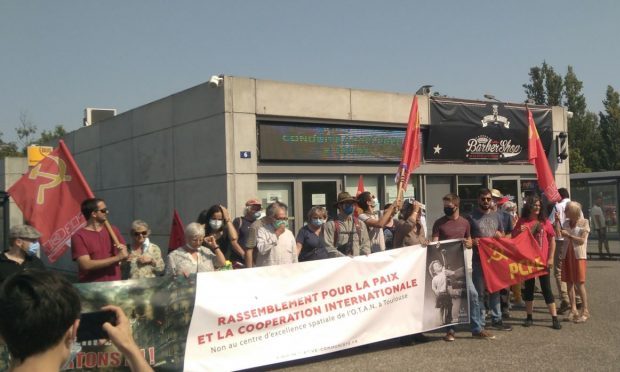 On 21 August 2021 in Toulouse, at the initiative of the Pôle de Renaissance Communiste en France (PRCF), and at the call of a large collective of peace activists, a rally was held against Nato‘s ‘Aerospace Centre of Excellence’.

This centre for space warfare represents the ongoing militarisation of space and the privatisation of space exploration for the exclusive benefit of American multinationals like SpaceX.

The extension of Nato’s ‘theatre of operations’ into space is just one more step in the imperialist drive to war. The PRCF and all participants in the demonstration in Toulouse should be applauded for their resistance to this, and to the subjugation of French workers’ interests to the service of US imperialism.

Held with the participation of the Communist Party of the Peoples of Spain (PCPE), the demonstration was supported by communist parties across the Nato member countries.

Below is the statement sent to the demonstrators by the CPGB-ML.

Nato’s role in perpetuating war – whether hot or cold – against the opponents of imperialism continues unabated. China, Russia and Iran present an ongoing threat to the imperialist system, and to US dominance within it. It is for this reason that the drive to war is being ramped up in western economies, militaries, and media propaganda.

Britain and France are, as ever, willing participants in this aggression. Britain has recently lifted the cap on nuclear warheads to 260, an increase of over 40 percent. This was done with the absurd and hypocritical argument that Russia and China present a threat to us, rather than the other way around.

Likewise, the British government slavishly followed the United States in criticising Iran for breaching the JCPOA nuclear deal – even when Iran was in compliance with the deal, and it was the US which continued sanctions and which ultimately walked away from it.

The 20-year travesty of the war in Afghanistan – at the cost of over 200,000 lives in the region – is proof written in blood that Nato, the war machine of western imperialism, is a force only for occupation and destabilisation.

It must now be clear to all – not least the French and British troops who participated in that bloody and useless occupation – that Nato is not our protector. It does not serve us; we serve it, as its cannon fodder.

Afghanistan may be back in the hands of the Afghans, but Nato’s perpetual war will continue – shaking down the public purse here at home to line the pockets of military contractors, and shedding the blood of innocents anywhere it sets foot.

And now the United States, increasingly desperate in the face of a resurgent China and stubborn anti-imperialist forces around the world, is again leaning on its sidekicks in Europe to feed the war machine.

The French working class, who were vehemently opposed to the war in Afghanistan, cannot allow the Nato militarisation of space to continue unchallenged.

The Covid pandemic has exacerbated the capitalist crisis that has had such a disastrous impact on the working class of western nations since 2008 – unemployment, homelessness, poverty wages and cuts to public services have been the lot of workers everywhere. And yet our rulers continue to funnel public funds into aggressive military projects like the Nato Aerospace Centre of Excellence.

They believe they are on the front foot. They believe they can act with impunity. It is our responsibility, our duty, to ensure that there is organised resistance to this endless drive to war.

This is why the CPGB-ML is proud to send this message of solidarity to our comrades in Pôle de Renaissance in France, and to support this rally against the presence of Nato in Toulouse.