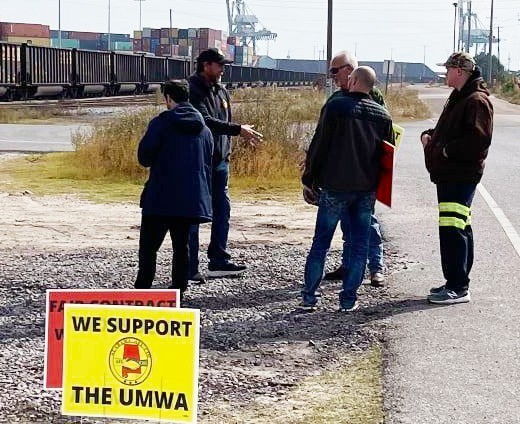 NEW YORK — Led by a contingent of miners from the more than seven-month-long strike at Warrior Met Coal in Brookwood, Alabama, over 400 people marched here Nov. 4 to support the strikers and to protest an Oct. 27 court injunction that bans picketing or other union activity of any kind within 300 yards of the mines.

The union is organizing solidarity actions against the injunction across the country. Plans will be posted on the UMWA Facebook page.

A solidarity action was organized the same day by International Longshoremen’s Association Local 1410 in Mobile, Alabama.

The injunction, which was extended through at least Nov. 15 by the court, is one of the most draconian anti-strike measures taken in decades. The fight to overturn it is in the interests of all working people.

The miners are “not asking for something outrageous,” Roberts said. “They’re not wanting to be millionaires or anything like that. They’re basically wanting to get back to where they were five years ago.”

“I’m on strike for my family and for my brothers and sisters in the mines,” Warrior Met striker Brian Kelly, a third generation coal miner and president of UMWA Local 2245, told the press at the rally. “We lost $6 an hour in 2016.”

Busloads of retired miners and some who are working came from Virginia, West Virginia, Ohio and Alabama. A contingent of a few dozen hotel workers from UNITE HERE Local 100 joined the action, as did the Coalition of Labor Union Women and other New York area unionists. They marched from Central Park to the offices of BlackRock, one of the country’s largest hedge funds, that holds $167 million of Warrior Met stock. That 14% stake makes BlackRock the largest shareholder.

“I came because we need to defend the union,” 94-year-old Roy Castle told the Militant. Castle came with dozens of others from southwest Virginia. Pointing to his pension and lifetime health care won by the union, he added, “We survived because we have the union.”

Some 1,100 UMWA members went on strike at Warrior Met after the company refused to reverse concessions made in 2016 when the previous owner, Jim Walter Resources, went bankrupt. BlackRock was Jim Walter’s largest creditor and played a key role in setting up the new company. Miners say that bosses promised they would restore wages and benefits once the company was running again.

Warrior Met says that they have done so much hiring that 60% of the strikers weren’t even working there in 2016, as if that would be justification for maintaining the givebacks.

Two days before the protest, Warrior Met CEO Walter Scheller announced “our most profitable results since the onset of the COVID-19 pandemic.” The price of coal has more than doubled since the end of 2020.

Warrior Met did not respond to questions sent by the Militant.

Hoping to undercut the broad solidarity the strike is receiving, the company has been violence-baiting the union, alleging that strikers have been physically attacking the vehicles of scabs crossing the picket line.

“They put out videos on us that said we were being violent,” UMWA District 20 Vice President Larry Spencer told the rally. “They don’t put the part out where their cars have been hitting our people.”

The union has complained to the police about the attacks on pickets by scabs, to no avail. Instead, the cops are escorting the scabs into the mine.

“They’re trying to break the union,” Brian Sanson, UMWA secretary-treasurer, told the rally. “We have a right to picket.” The union is appealing the unconstitutional injunction to the Alabama Supreme Court.

Retired miner Chris Lester, 64, told the Militant the injunction “means only the scabs have rights.”

Lester, like many of the retirees at the march, was part of the 11-month strike against Pittston Coal Company in Virginia in 1989. Thousands of miners and other workers came to the strikers’ Camp Solidarity to join in their struggle. “I was arrested for being part of stopping the coal trucks,” Lester said. “That strike was some experience.”

Tevita Uhatafe, a fleet service clerk at American Airlines at the Dallas-Fort Worth airport and shop steward for Transport Workers Union Local 513, got union time off from work to attend the rally. “I’ve been going to every strike I can get to,” she said. “We have to keep pushing.”

“We had a community and union protest at the harbor in Mobile at the same time as the UMWA protest in New York,” Mark Bass, president of International Longshoremen’s Association Local 1410, told the Militant Nov. 9.

“The ILA is standing 100% behind the striking miners,” he said. Warrior Met, which produces metallurgical coal used in steelmaking, ships its coal out of the port of Mobile to Latin America, Asia and Europe.

“We’ve talked to the Port Authority in Mobile and explained that we don’t want Warrior Met’s business here as long as the miners are on strike,” Bass said. “We have connections with dockworkers all over the world and are in touch with them about this.”

Strike support rallies are held every Wednesday at 6 p.m. at Tannehill State Park in McCalla.

Susan LaMont contributed to this article.