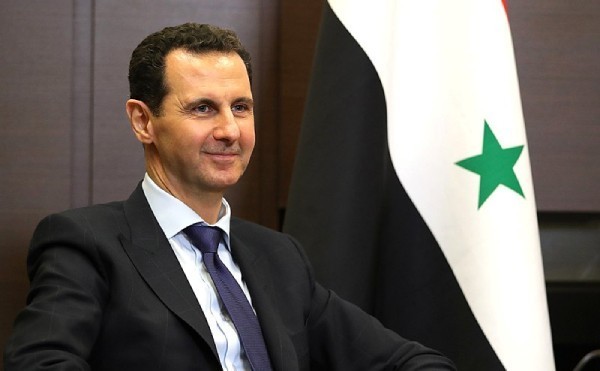 Bashar al-Assad is attacking some of the last opponents to his regime (Pic: Wikicommons/ kremlin.ru)

Socialists in Syria are warning that the regime of the ruler Bashar al-Assad is trying to crush the last centres of revolutionary resistance.

The statement from the Revolutionary Left Current in Syria statement says, “The criminal regime is working to turn Daraa, the cradle of the revolution, into a cemetery.”

In March 2011 secret police arrested a group of 15 school students who had spray painted “The people want to bring down the regime” on a wall. This was the slogan of the Egyptian and Tunisian revolutions which Syrians had seen on their television screens.

Al-Assad and his forces were terrified they too would also be toppled.

The students were ­tortured and had their ­fingernails pulled out. The shock and anger at such barbarity helped trigger a nationwide uprising.

Ten years after the revolution began, the ­government has ruthlessly destroyed almost all the committees that were thrown up by ordinary people to take over the running of their areas.

But, says the statement, “Despite the decline of the popular movement and its defeat in general, parts of the regions of Daraa and Houran have remained resistant to the forces of the regime and its allies and also to other counter-revolutionary forces.”

This is a reference to how people have had to combat the regime and its allies. In particular the Russian and Iranian forces, but also in some places Isis and al-Qaeda.

The statement goes, “The spirit of popular resistance and the goals of the popular revolution remained alive and enduring.

“But the regime of the junta, built on the idea of humiliating and crushing the people, couldn’t tolerate the survival of this resistance.

“It believes that by ­crushing it, this will crush the last hope of the Syrian people for their liberation, and thus complete its victory over the rebellious masses.”

The regime took over Daraa Governorate province militarily in 2018, but in some areas its hold is contested.

The latest challenge to the regime was people who refused to take part in the fake presidential elections in May this year.

Some 50,000 people in the area of Daraa al-Balad have faced a ferocious ­bombardment. And the defeat of the resistance is not just about ending the hope of overthrowing al-Assad.

The statement says, “The end of popular resistance in Daraa is an economic need for the regime, Jordan and other countries. It is a need for the Zionist state [Israel], which prefers the regime to control its southern regions rather than control by a ­popular movement hostile to it.

“The regime has been for decades the best guard for the security of the Zionist state.”

At one point there were negotiations between the regime and the local committees in Daraa. But, “for months, the junta’s regime has been violating all the agreements it made with the resistance masses in Daraa, under Russian tutelage.

“These days it is tightening the noose around our people. It demands they either ­surrender completely or leave to the areas of the Turkish occupation and the terrorist Hay’at Tahrir al‑Sham in Idlib.

“The forces of the left and freedom in our country and the world must stand in solidarity with our people in Daraa, who are ­defending their land, freedom and dignity.”

There is now talk of a deal between the regime and some of the Daraa committees. It would allow the government to disarm people and search homes as it pleases.

But the socialists’ statement ends uncompromisingly.

“Greetings to our ­comrades in the steadfast ­revolutionary left movement in Daraa. A salute to the masses of our heroic resistance

“No to the displacement of our people from Daraa. No to turning Daraa into a concentration camp. Freedom for the popular masses in Daraa and every part of our country. Long live international solidarity!”