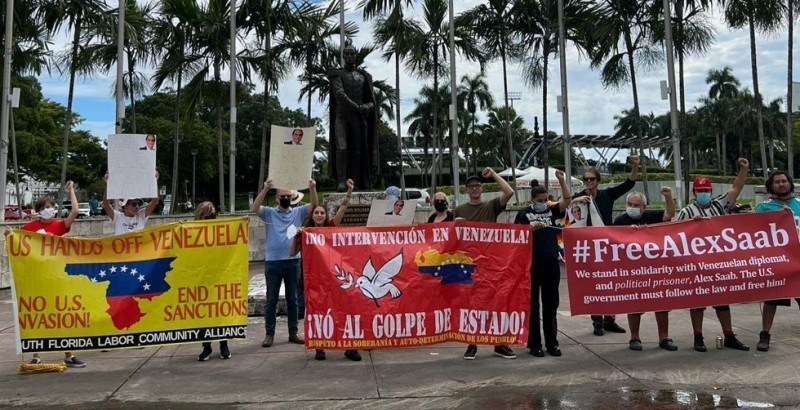 Miami, FL – On October 24, 30 protesters rallied against the illegal U.S. extradition of Venezuelan diplomat Alex Saab. The U.S. Hands Off Cuba and Venezuela South Florida Coalition hosted the event at the Torch of Friendship Park in front of a Simón Bolivar statue. Other groups in attendance included the Bolivarian Circle, POWIR and the Committee to Stop FBI Repression.

Alex Saab was arrested in Cabo Verde in June 2020 while in route to Iran for a trade deal that would help Venezuela amidst the historic U.S. blockade. Venezuela has struggled to provide its people with food and other basic necessities because of U.S. sanctions, coupled with the COVID-19 pandemic. Saab was extradited to the U.S. on October 18.

“We condemn this illegal attempt by the U.S. justice system to imprison and put on trial a Venezuelan diplomat. The U.S. has a long history of furthering its imperialist agenda by making false accusations against the forces in its way, international and domestic. The only way to win in the face of this is solidarity between these forces and fighting back,” said Will Blake of the Committee to Stop FBI Repression.

The protesters united around the need to continue fighting to free Alex Saab and to end the horrific U.S. sanctions starving Venezuelans. There will be another Free Alex Saab protest Monday, November 1 outside the Miami Federal Detention Center.