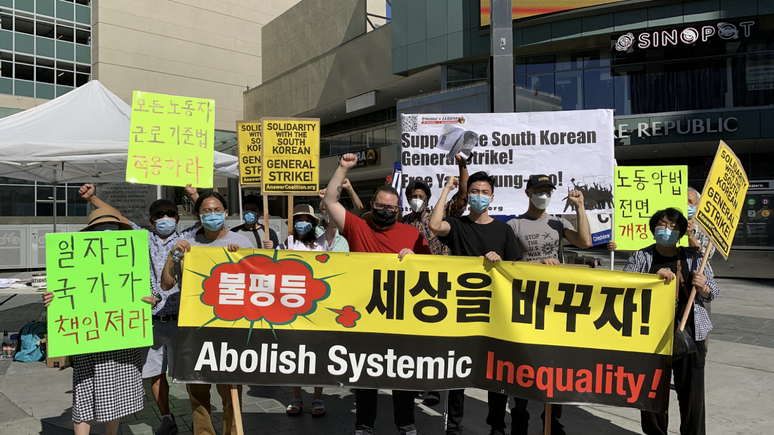 On October 20, millions of workers across South Korea staged a general strike amid an intensifying battle for labor rights and social rights. Demonstrations organized by workers were viciously attacked by police seeking to repress the workers’ struggle.

On September 2, Yang Kyung-soo, the president of the Korean Confederation of Trade Unions (South Korea’s largest umbrella organization of trade unions), was arrested for organizing a union rally in a pre-dawn raid by hundreds of police at the KCTU headquarters. He is the 13th president of the KCTU in a row to be jailed. His arrest came only a few hours after the government struck a deal and avoided a nationwide strike of nurses.

There is no question that Yang’s arrest was politically motivated, and today he is still behind bars. Yet this repression has not succeeded in silencing South Korea’s union movement. Instead the KCTU called for a general strike – a major threat to business as usual – and demanded freedom for Yang Kyung-soo and a broad range of social and economic reforms.

At the same time the union struggle in the United States has become increasingly intense, with 100,000 workers in what is popularly being referred to as “Striketober.” How are these two struggles linked?

U.S. workers should stand in solidarity with the general strike in South Korea

U.S. workers have far more in common with workers in South Korea than they do with the bosses and the owners that control the governments of both countries. The everyday struggle to survive in the face of the employers – whose motivation is always to turn an ever-larger profit by taking more and more from the workers – is the same struggle in South Korea as it is in the United States.

But there is a deeper struggle happening here too. The U.S. government created and maintains the extremely repressive of policies of the South Korean government.

Korea suffered greatly under Japanese colonial rule from the early 20th century until 1945 when Japan was defeated in World War II. The Korean people had waged a determined struggle for the liberation of the country, and so the Committee for the Preparation of Korean Independence organized people’s committees to prepare the transition to independence.

But the United States, in a newfound position of global power, betrayed Korea. Instead of allowing Korea’s transition to independence, the U.S. decided that it wanted Korea as its own colony. Two young U.S. military officers, who knew nothing about Korea, drew a line across Korea dividing it into North and South. Until then Korea had been a unified country for thousands of years.

In the South, the United States told the Japanese colonial occupation soldiers not to leave their posts until U.S. soldiers could take their place. It outlawed the CPKI people’s committees and then embarked on a campaign of terror against the movement for Korean independence and unification. The United States then took the Koreans who had collaborated with the Japanese occupation and made them the police and government officials of the newly created right-wing South Korean puppet government, the Republic of Korea.

While it is not an official colony, South Korea is occupied by roughly 30,000 U.S. troops. In the event of a war, the South Korean troops are by law automatically transferred to the control of U.S. generals. U.S. politicians and intelligence agencies work closely with and exert pressure on the South Korean government to ensure pro-U.S. policies, ensuring the continuation of the occupation and the ability of U.S. corporations to make super profits from South Korean labor and markets.

For these reasons, workers in South Korea are not only facing off against the South Korean government, but they are facing the U.S. empire that is behind it.

The general strike continues the long tradition of resistance to the exploitative conditions the Korean working class in the South has been subjected to. The KCTU itself defeated a repressive labor law with the 1996-1997 general strike, and was instrumental in the 2016–2017 Candlelight Revolution that ousted the extreme right-wing president Park Geun-hye.

There are many battles still ahead, and if U.S. workers unite with South Korean workers, we can both become even stronger, and ultimately win justice and human dignity for all.

The following statement was issued by the People’s Democracy Party, a party in South Korea fighting against imperialism and the exploitation of the working class

Workers and people of South Corea have struggled under the fascist oppression of the colonial semi-capitalism. South Corea’s government and police are undermining even the rights of trade unions by using COVID-19 as a pretext. South Corean Police stigmatized the National workers’ rally in July as “the illegal rally” and coordinated the special investigation office. On the day of the rally, the police completely blocked the workers’ assembly and enforced a check on the vehicles of the KCTU (Korean Confederation of Trade Unions). Due to the oppression of the fascist police, the KCTU was eventually forced to move the place for the rally. And last September, the president of the KCTU was arrested and it reveals the essence of the fascist government and police. However, the reason why workers risk their lives to come out on the streets amid the spread of COVID-19 is that they choose to die fighting rather than working in the subordinate and distorted social structure. In South Corea, about 2,000 people are killed in industrial accidents every year, and over the past four years, the number of regular workers has decreased by 240,000 and the number of precarious workers has increased by 950,000.

What is the difference between the Moon Jae-in government, which shows mercy to the group of traitors while repressing and restraining the unification patriotic forces and labor movement forces, wielding various fascist evil methods and the evil power of “Lee Myung-Bak and Park Geun-Hye”? Where there is oppression, there is struggle. Our people will undoubtedly end the treasonous and anti-popular evil law through the popular uprising and advance a new world of people’s democracy and re-appropriation with welfare.

South Corea is not alone in the oppression of labor and human rights under the pretext of the COVID-19. As the imperialist forces are accelerating the oppression of workers in each country under the pretext of COVID-19, people all over the world, including the struggle of 100,000 workers in the US and peasant protests in India, are fighting against imperialist exploitation and oppression. The united struggle of the workers and people in all over the world will certainly destroy the imperialist forces and exploiting class.