Spooks and Grunts and Pigs: the IPIC 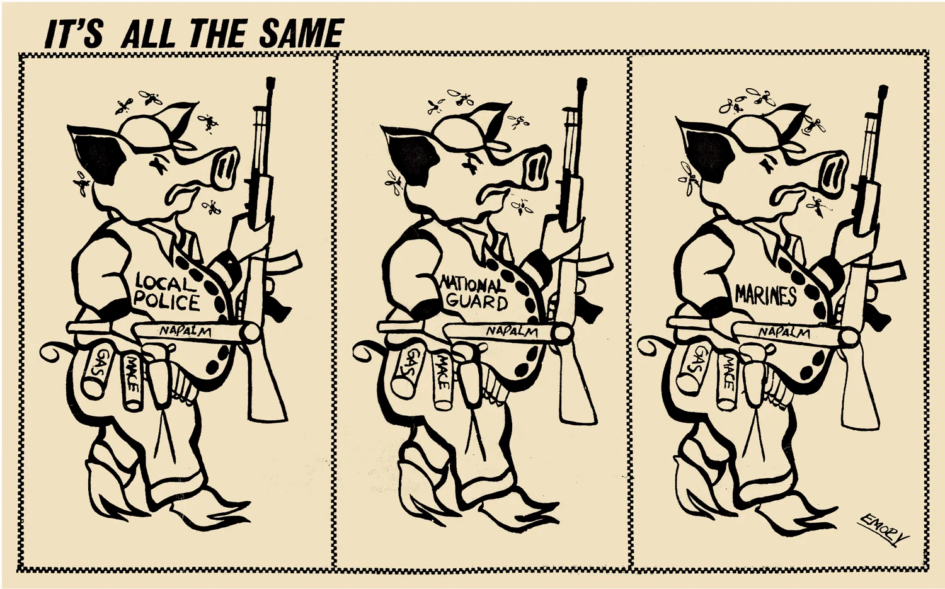 The capitalist/imperialist system is driven by a world view that is colonialist, racist, sexist and Zionist. It is an enemy that operates through governments, institutions and agencies that do its bidding. More particularly, a worldwide network of military, intelligence and police agencies protect the capitalist system with interconnected assets that operate locally, nationally, regionally, and internationally. The All-African People’s Revolutionary Party calls this network the Industrial, Police/Military, Intelligence Complex (IPIC).

Who makes up IPIC? It’s a collection of spooks, grunts and pigs. Spooks are the spies who staff intelligence agencies, and who direct military forces to the world’s natural resources. Grunts are soldiers enlisted in imperialist military forces who secure the resources identified by the spooks. The pigs are the so-called law enforcement forces that protect the property and resources of the capitalists. IPIC is an economically motivated espionage-military-prison-police force controlled by a global empire supported by international, monopoly, finance capital. IPIC’s role is to repress popular discontent, secure resources, protect property, defend wealth, and pursue the vital interests of capitalism and imperialism. It is a vast criminal web that includes but is not limited to a global network of governments, corporations/financial institutions, intelligence agencies, military organizations, private armed militias, and local, regional, national, transnational police, and security forces. They are the world’s biggest gang.

Spies, soldiers and cops are the frontline forces in the enemy’s global assault on African people. They are the goons who facilitate the theft of the African World’s resources and the exploitation of our labor, inside and outside of Africa. They are the armed police thugs that occupy our communities. They are the military conquerors who bomb, invade, and plunder our nations. They are police officers trained by Zionists to smother dissent and rule through military occupation. They are African generals with allegiance to Washington or Paris. They are Haitian presidents managing by murder. They are international spies that infiltrate our organizations, destroy revolutionary governments, and assassinate our people-centered political leaders.

Capitalist countries and their partners (Transnational Corporations and international Institutions) employ these spies, soldiers, and police to protect their wealth and crush the People’s resistance to oppression and exploitation. The entire repressive apparatus is directed by super-secret spy agencies such as the CIA (USA), Mossad (Israel), and MI6 (Britain).

Grunts (soldiers) and Their Dirty Work

IPIC’s job is to identify resources such as oil, coltan, gold etc. and develop means of securing this wealth and delivering it into the greedy hands of international capital. To find IPIC at work, find the locations of valuable resources. When capitalism locates resources, it uses military forces to secure them. The invasions of Iraq, Afghanistan, Haiti, Syria, are examples of how this happens. Also consider the establishment of 50 U.S. military bases in Africa (AFRICOM), and the 800 U.S. military installations in 80 countries around the world. The mission of these forces is to overthrow progressive and revolutionary governments, kill progressive leaders, infiltrate, destabilize and destroy revolutionary organizations, and suppress mass uprisings. They have blockaded Cuba and Venezuela, and murdered protesters in Uganda, Haiti, and Nigeria. They put knees on our necks and shoot us down in the streets of urban areas around the world.

Resources, once controlled by grunts, are not handed over to governments that the spies and grunts work for. Instead, they are delivered to international corporations and financial institutions that control the world’s resources. They sell everything on Wall Street. They want everything, everywhere to be owned and controlled by the Gangster Banks, corporations, and international financial agencies Everything, from Baltimore’s dilapidated housing stock to South Africa’s gold and diamond mines, Nigerian Oil fields, Costa Rican mango farms, South American rainforests and Congolese coltan mines are all owned and/or controlled by the transnational corporations, banks, and financial institutions. All of this to accumulate wealth for the capitalist ruling elite, which represents 1/10th of 1% of the world’s population,

Control of a nation’s resources can sometimes be secured through diplomatic or economic means. Bribery, aid, trade agreements, arms sales, contracts, and diplomatic pressure are the not-so-subtle means used to coerce governments to comply with capitalist/imperialist pressures and demands. When these means fail, military force is considered.

The spooks come first. They identify, collect, and analyze data, collect assets, define targets, and coordinate missions. The grunts carry these missions out. These operations are very expensive and siphon away resources that could be used to address critical needs of people in need. In 2020-2021 the U.S. government alone spent 706 billion dollars on the military (grunts). This is more than half of the government’s annual discretionary spending. U.S. state and local governments annually spend over 115 billion dollars (about $350 per person in the U.S.) on police (pigs) and prisons. An additional secret budget of billions of dollars is set aside each year for the domestic and international intelligence services.

Who are the Spooks?

Each of these capitalist/imperialist states has both an internal and external intelligence service. The internal agency combats dissent within by repressing progressive and revolutionary organizations and suppressing active opposition to the capitalist system.

The external intelligence agencies work to maintain control of the world’s economy by establishing monopoly control of natural resources, markets, and labor power. They protect corporate wealth and the capitalist elite.

The intelligence agencies of different capitalist countries are intimately connected by a common elitist ideology. They are led by The United States and Israel. Britain and France are two of many willing junior partners. The CIA, MI5 and Mossad are financed by nation states, but always they serve monopoly capital, the global master. Money rules, profit dictates and cash is king! In the end spies, soldiers, and cops work for the banks, and the owners of capital.

National, state, and local police forces protect business interests, private property and maintain control of populations through extra-judicial killings, mass incarceration, crowd control and other anti-insurgency methods, harassment, and violence. Communities around the world are occupied by police forces loyal to capital. Many of these police forces, patrolling the streets of the world’s cities are trained by the Zionists, using methods perfected in the occupation of Palestinian land the suppression of Palestinian people. Lagos, Port of Spain, Baltimore, Washington, DC, Monrovia, and Port of Prince are policed by officers trained by Zionists, they are not alone.

We have found the enemy, and it is IPIC

Spooks, grunts and pigs (IPIC) are the Enemies of African people and all humanity! The A-APRP understands that, to defeat capitalism and imperialism (to be free, united, and socialist) we must defeat IPIC. We long ago called for a coalition to Smash IPIC, especially the FBI and CIA. Our struggle is for the organization and political education of the people and against capitalism and its Industrial Police-Military Intelligence Complex. Failure to identify these enemies and unite in a fight against them can only result in continued exploitation and oppression of African people and the defeat of our movement to change the world for future generations.