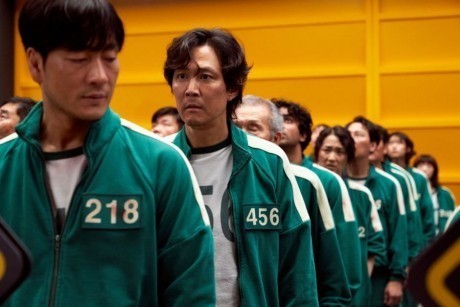 The Netflix streaming show Squid Game is hugely popular, but for contradictory reasons. It is a blatant critique of late-stage capitalism, but it empties its own critique of capitalism by getting co-opted within the contemporary capitalist flows of media production.

It should be getting attention for this sharp social critique, but is this what explains the attention it’s getting?

It is the first South Korean show to win such unprecedented global attention (although K-Dramas have long existed and find a very strong global audience). Recent South Korean cultural products that take issue with class and global imperialism, like Parasite and the remake of Snowpiercer, have garnered Western adoration too.

However, what everyone is united on, despite these contradictions, is the confounding tonality of the show when it comes to its treatment of violence. Every critique has recognized the way the series takes up violence.

Each episode’s pace is directed towards how gory and violent the world of Squid Game is – and yet, it is justified on the grounds of equal treatment and fair chances. The aesthetic quality of the violence on screen can be called simply merciless. The makers leave no stone unturned to zoom in on every body shot dead, slapped, maimed and thrown away.

Its shock and alienating violence is the biggest critique of capitalism – we are used to it, and in our images, we are thrilled by the games that kill. Anything that isn’t thrilling seems so distant from the violent reality we are now used to. Indeed, dreaming the death of capitalism and a revival of our humane and humanist relationalities, feels out of the ordinary. Even the kindest acts in the end feel like they might have an agenda behind them – the paranoia instilled by this winner takes-all game is the essence you are left with.

However, not everyone watching Squid Game has appreciated it for its critique of South Korean and general capitalist culture while some have written long twitter threads detailing all the Easter-eggs appraising the real violent uprisings and events which are metaphorized in the show.

Violence is judged differently, if you can spot it. In the middle of the brutal violence of the games, central character Gi-hun talks about a flashback to a strike he went through at the auto plants part he was laid off from after 10 years. This resulted in the death of a coworker. He says that the Games nightwatch he was on in the violence of the Games reminded him of taking turns in a factory occupation. His flashback is not gory, but hinted at, with blurred imagery, which only inspires sorrow and potential solidarity.

The moment is recognized by an older player, who says, yeah, I remember that was a big strike, and someone died. And then, back to the game, back to the show, where a lot more will die on screen.

Some might watch it for their K-Drama favourites who are suddenly being discovered by global media audiences thanks to the value provided by Netflix. The violence becomes cool because it is Gong-Yoo slapping Lee Jung-Jae and in that turn, capitalism’s critique itself becomes cool, consumable, comfortable when it is pretty, gory, desensitizing and glamorized by your favourite faces.

These are big stars only being valued when the Global North nurtures its own critique in platforms like Netflix. Its maker Hwang Dong-Hyuk was cancelled by multiple production houses, and now Jeff Bezos tweets in praise of Netflix’s “internationalization strategy” for “obscure” i.e. non-English shows.

But sadly, Squid Game is such a spectacle of capitalism and a product of its own violent contradictions, we need to focus our attention as discerning viewers and Marxists on what relations of oppression and exploitation get obscured behind the spectacularly gory images.

Why do the rich and powerful in Squid Game talk about being “gganbu” (sharing a common goal together, being collectivist and not individualist), while putting the indebted prey they find into a violent game against each other? Is it a thirst for gore or a need to justify a system that masks the violence and individualism outside with a controlled system inside that is ultimately the same but with the rules made explicit and therefore somehow ‘fair’?

A game that seems better than the one outside, but still quashes unions, undercuts their dangerous solidarities, and pits their survival against each other for feeling human again.

And disguises it all as a game played by children.