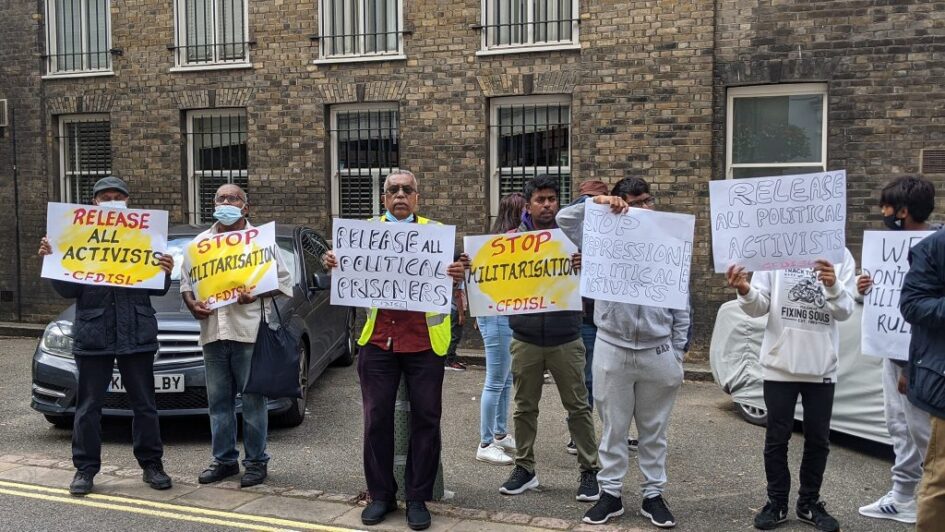 Teachers and students in Sri Lanka were out protesting in their thousands until the recent spike of the Covid delta variant to a dangerous level. They have been fighting on two fronts. Teachers have been demanding to resolve a long-standing salary anomaly issue. Students have been fighting against a very dangerous policy of the government to commercialise and militarise the education system of the country through a proposed law in the form of the Kothalavala Defence University Bill.

The salary anomaly of the teachers and school principals has been simmering since 1997 when a government commission appointed to formulate new salary structures for public sector employees introduced new structures for all sectors of public servants other than teachers which were to be structured at an undefined future date. By doing this, a salary anomaly was created between teachers and some sections of public sector employees who were, up until then, on comparable scales or levels. The unions of the teachers and principals have been demanding from successive governments that this anomaly be rectified for teachers and though various governments of the day have verbally agreed to this demand, they have never taken a serious step to resolve it.

The main reason for this issue dragging on so long is partly due to the teachers and their unions. On the one hand, a very small percentage of the country’s teachers – numbering more than 241,000 – were organised in unions. New recruits to the service were reluctant to join and did not believe in unions. Also, union leaderships were very much at a distance from the average teachers, who mostly now are fairly young recruits. Until recently the majority of them did not know that there was a long-standing salary anomaly issue affecting teachers as a whole.

Up to the beginning of last month this issue only surfaced occasionally, with union leaders writing letters to the education authorities and giving statements to the media. However there was anger building up among teachers underneath for not resolving their salary issue. That anger exploded to the surface with the forcible and violent manner of the arrest of several teachers’ union leaders including the General Secretary of the Ceylon Teachers Union whose name is Joseph Stalin. His is one of the main unions protesting against the Kothalavala Defence University Bill when it came up for debate in Parliament. They were taken by force for quarantine and then, even after the court released them on bail the police sought an order to commit to quarantine.

Teachers then stopped the online educational work they were conducting voluntarily since early this year, asking the authorities for the immediate release of their union leaders. Within a day that anger erupted onto the streets where teachers began marching in thousands in major cities and towns asking for the immediate release of their union leaders and also the resolution of their salary issue. For a period of close to one month teachers from the south to north and from the west to the east have been braving the Covid 19 pandemic and demonstrating, marching and picketing, demanding redress for the salary issue.

The government’s plan was to pass the Kothalavala Defence University Bill in Parliament in July, using their huge majority in Parliament. Regime of President Gotabhaya Rajapaksha hoped to fulfil two objectives through this Bill. On the one hand it was aimed at allowing private universities to be established. But the students’ movement did not allow that to happen; the Inter-University Students’ Federation (IUSF) – the main students’ organisation – and the Students and Mass Movement for Free Education organised protest action involving thousands of students and working people all over the country. The high point was the march organised by these two bodies on August 3rd from Colombo to the Parliament carrying a coffin symbolising the death of free education.

Though the government did not block this march to Parliament Junction, when the students themselves dispersed it started hunting down leading activists of the campaign. Arrests were carried out of Vasantha Mudalige, Convener of the IUSF, and president of the Students’ Union of one university, two leading activists of the Frontline Socialist Party and several students.

These arrests were carried out in a way reminiscent of the abductions that took place before 2015 when President Gotabhaya was the country’s Defence Secretary. Civilian clothed, well-built people came to the homes of those arrested and took them away without stating any reason or where those people were being taken to.

Relatives and fellow activists had to take a lot of trouble to find out where these people were being held. Even after arresting them, the government was chasing some more activists and trade union leaders. Even at the moment of writing, the Intelligence Police is searching Chathura Samarasinhe, General Secretary of the Ceylon Estate Staffs Union – a well-known left union leader – together with another prominent university academic, Dr. Mahim Mendis. These four have now been remanded till August 31st on trumped up charges.

The Kothalavala Defence University Bill, against which the students have been spearheading their campaign, is a move by the government to commercialise and militarise the present free state education system which has existed since 1943. It wants to dismantle free education so that state expenditure on education can be reduced on the one hand. On the other, the new wealthy class who have amassed money courtesy of the neo-liberal policies of the governments since 1977,  can get the best segments of education such as medicine, engineering, law etc. under their grip.

This regime of Gotabhaya Rajapaksha, who is a former head of the military, is simply militaristic in essence; it intends to give the military a greater say and a controlling stake in the education sector. It wants students to be obedient and not to fight for the free education system or any take any action or protest against policies of the regime which they consider inimical to the best interests of the country.

By this new bill, the government aims to give wide powers to the proposed university headed by, and under the control of, the defence establishment. It wants  recognition of other universities and degrees awarded by institutions existing outside the recognised university system. It aims to create a parallel system of university regulation other than the University Grants Commission, which is the established regulator for the country’s higher education system. This would inevitably pave the way for the creation of fee-levying educational institutions in the name of a university where only the super-rich class of the country could have access.

Students and left forces have continuously opposed attempts of various governments to privatise the education system and have repeatedly and have ferociously fought to abolish ventures established for that purpose. In 1989 they conducted a fight against the North Colombo Medical College under terrible circumstances when the whole country was gripped by fear due to the terroristic activities of the so-called People’s Liberation Front (JVP) and counter-attacks launched by the then government. Four years ago, students spearheaded a protest campaign for the closure of the SAITAM medical college, established to award medical degrees for a huge fee, affordable only by a tiny minority amongst the  super-rich.

The United Socialist Party is fully committed to protect free state education in the country even though it already lacks many elements of a full and free education system. The USP has been a part of the broad coalition of students’ unions, academics, trade unions and political parties established in 2017 against SAITAM and is now fighting for the abrogation of the Kothalavala Defence University Bill.

We are demanding that the government withdraws this Bill which is now opposed by vast sections of society. The government has been forced to postpone parliamentary debate on this Bill with some sections within the regime itself being opposed to it.

We also demand that the teachers’ salary issue be rapidly resolved before the schools reopen when the Covid 19 pandemic is overcome so that an atmosphere is restored where children can once again have a decent education.