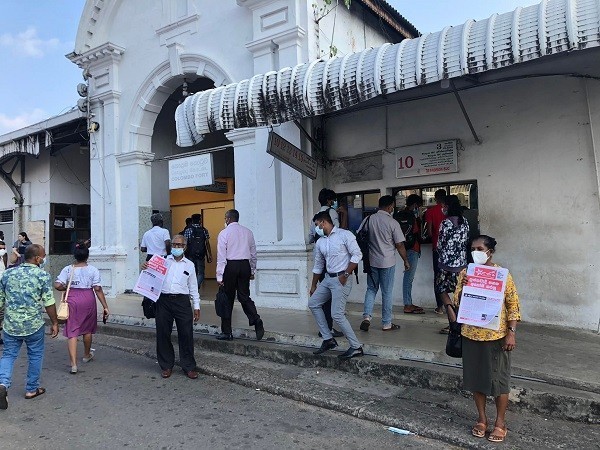 Tens of thousands took to the streets of Sri Lanka, on 16 March, demanding the government to act on the spiralling cost of all essential commodities. Street protests have become a common feature and take place almost daily. Food prices had increased by a record 25% this year and it continues to rise. The inflation rate crossed over 17.5% in February. Not only are the prices high, but many commodities including medicine are simply unavailable for the wider masses. Queues at the shops are getting longer, and there are reports that many people had fainted. Three people died in the last several days while waiting, with hungry stomachs, in several mile-long queues.

The government finally admitted last year that its foreign reserve was depleted and the country faced the worst economic crisis since independence. Foreign debt to GDP crossed 101% last month. This is also likely to increase as the current Gotabaya Rajapaksa government’s only solution is to borrow more. Starting with one billion dollars this May, the government is expected to pay over $7bill by the end of this year. Simply no money is available either to repay the debt or import essential food and fuel, for which a minimum of $20bill will be required. Every attempt by the government and the central bank to control the spiralling crisis has failed. Printing rupees and various measures have made no impact. The Sri Lankan rupee is becoming increasingly worthless and a tendency is beginning to emerge to use other currencies. The government was quick to implement limited capital controls, including the currency outflow. Imports of over 350 commodities that are considered to be ‘luxury’ (including mobile phones) are now banned. Deteriorated conditions have created enormous insecurity and fear of famine and harsh conditions.

The $1 billion allocated as a “relief package” by the government was nowhere near enough. The government policy focuses on borrowing more to pay the interest and the loan repayment. The government has asked almost all the countries in the region for a loan. From Pakistan to Bangladesh, the Sri Lankan government asked for loans and to get ‘whatever they can provide’. China and India also sent rice and other food items. However, this made no difference.

Though exact details are still not known, the Financial Times reported that Sri Lanka’s long-term debt is now over $45 billion – the majority of which is believed to be owed to China. The Rajapaksa family, seen as close to the Chinese regime (it was reported in the past that the Chinese had directly funded the Rajapaksa family’s election campaign) had appealed for debt payment reschedule and debt relief. So far, the Chinese government has refused these appeals. However, as part of the ‘restructuring’ of the debt, the Chinese regime in the past obtained full control of parts of Sri Lanka – such as in the Hambantota port area, as well as part of the new Colombo port city. India’s $1billion credit and various ‘promises’ of investment also paved the way for the Indian government taking control of parts of Sri Lanka. Both countries have now suspended any further help, partly in anticipation of bankruptcy.

Given this situation, the government has now taken a u-turn from its stand on not borrowing from IMF and started to negotiate a deal with the IMF for further borrowing. As Pakistan’s experience shows, IMF deals come with huge attacks on living conditions and state-owned services. This shows the Sri Lankan government is now planning to carry on with the attack on living conditions. In a ‘special speech’, the president gave on 16 March, Gotabaya Rajapaksa claimed that the crisis was “beyond their control” and he is not to blame for the crisis, as it was caused by the Covid pandemic. In addition to this lie, Rajapaksa predicts the export earring to reach $13 billion. None believe this is an immediate possibility. The only other solution outlined was “more borrowing”. Despite the pompous claim that the president “accepts responsibility for the actions” that he had taken, Gotabaya Rajapaksa listed all his mistakes as “success”. This includes his attempt to ban the chemical fertilizer without making any concrete plan of widely providing organic fertilizers. Rajapaksa was later forced to retreat on this ban following the ferocious protest by the farmers. This and other abrupt actions Rajapaksa took contributed to the food shortage. Fuel price increases and the low wage conditions also provoked strike actions and protests by the workers. A severe crisis in healthcare also led to major protests. The government then used the anti-worker law that was brought in by the right-wing UNP government in the JR Jayawardena period to confront the looming general strike in 1980, to ban the health workers from striking. Teachers also organized militant protests and strikes demanding wage arrears and faced similar repression. The attack on public education and health also promoted strong opposition from students who had taken to the street many times even during the pandemic period. The government responded by arresting students leaders and some of them are still detained.

The Gotabaya Rajapaksa government used covid as a cover to implement draconian measures to control the opposition that was emerging. The government-appointed military commanders to key positions, including handling the covid crisis. Key personnel in the government and other key institutions, including the central bank governor, are replaced by Gotabaya ‘loyalists’. The current Finance minister, Basil Rajapaksa, is the brother of the President and prime minister Rajapaksa was also appointed in July last year. When Mahinda Rajapaksa was defeated in the presidential election in 2015, Basil was charged with corruption and arrested. He then escaped the country to the US (both Basil and Gotabaya are US citizens) apparently by hiding his face while boarding a night plane with the aid of Rajapaksa-supporting officials. Despite the corruption case and many other cases that are pending, he was invited back to the country following his brother Gotabaya’s presidential victory. A parliamentarian was forced to resign to allow the unelected Basil to become an MP. In the final act of comedy, Basil who is known as a ‘money man’ or ‘Mr ten present’, was appointed as a finance minister. Many of the Rajapaksas and their loyalists are in control of the state apparatus and other key institutions. With such a grip on power, former army chief Gotabaya proposes a ‘military-style solution’ to every problem.

Militarisation and the increasing dictatorial measures are now enormously unpopular in the south of Sri  Lanka. However, this popularity had not given rise to substantial opposition. The main opposition capitalist party, the UNP (United National Party) is divided into two camps. None of them had put forward an alternative economic policy. Borrowing from the IMF is the only solution they all are able to come up with. The Tamil party, TNA (Tamil National Alliance), also wants the same. While sticking with their traditional ally UNP and newly formed SJB – a breakaway from UNP and presently the main opposition in the parliament – some of the Tamil leadership also wants the direct involvement of the Indian government to solve the economic and political crisis. For many workers and the poor in the south, this brings back the memories of Indian military intervention in the late 1980s. Far-right Mongs and others use this and other anti-Tamil and anti-Muslim rhetoric to whip up Sinhala chauvinism, which Gotabaya heavily leans on to maintain his grip on power.

In this vacuum, the so-called left alliance NPP (National peoples power) led by the JVP ( Janatha Vimukthi Peramuna) had gained some support, particularly among the urban middle class, as an anti-corruption alliance. However, the JVP also relies on nationalist (at times, Sinhala chauvinist) rhetoric and refuses to put forward an alternative to the bourgeois parties. Prominent JVP members had stated that they will negotiate with China and IMF to sort out the current economic crisis. The JVP had provided ‘left cover’ to the Rajapaksa family in the past. However, the Rajapaksa family recently lost many of its allies. Though the Rajapaksa government is very weak at this stage, it is able to maintain power mainly due lack of substantial opposition. Except for the United Socialist Party (CWI Sri Lanka), which recently launched a campaign for the non-payment of debt, no other organisation is able to come forward with an alternative to the current crisis.

An alternative platform for struggle must be built

It is crucial to build a non-sectarian and democratic platform that can bring together all the struggles that are beginning to emerge in the country. Unfortunately, the trade union leaders had not, so far, come forward to call for joint action against deteriorating conditions. A national assembly consisting of rank and file trade union activists and socialist organisations, and other activists, should be formed to prepare for the struggle. It is also vital that the opposition put forward a programme that defends all democratic rights, including that of language and religious minorities.

Liked this article? Please become a Patron! and support our work

Sri Lanka on verge of economic collapse – An appeal to union activists, students and workers