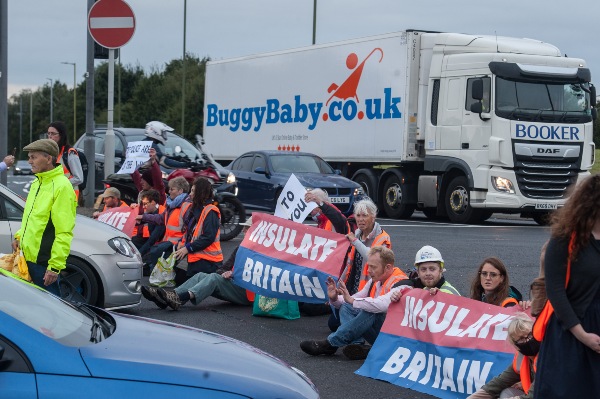 They were convicted of contempt of court on Wednesday for breaking an injunction not to protest on the M25 motorway.

Ben Taylor said he would continue protests and therefore was sentenced to six months,

Judge Dame Victoria Sharp said Taylor’s refusal to give up was “inflammatory” and a “call to arms”. She was giving him a longer sentence “to deter him from committing further breaches”.

The group and their supporters chanted, “We are unstoppable, another world is possible,” as they were led to the cells.

Meanwhile, Tory transport Secretary Grant Shapps prepared for further crackdowns. He said every motorway and major A-road in the country is now covered by injunctions. “Anyone who causes misery to motorists may face prison,” he tweeted.

The nine issued a defiant open letter after they were jailed. It said, “To the government we say, you can’t imprison a flood, there are no unlimited fines against a famine, you can’t bankrupt a fire.

“To the public we say, no one is coming to save you. In the past, when governments have failed to protect their people the right thing to do is to highlight this injustice, breaking the law if needed.

“This is what the suffragettes and Martin Luther King did and it is what Insulate Britain has done.”

The group’s immediate demand is for the government to fund and take responsibility for the insulation of all social housing in Britain by 2025.

It says this will save lives, particularly of older people, and begin to tackle the climate emergency.

Blocking roads is a mild response to the devastating reality of systemic environmental collapse.

It’s the actions of government ministers and fossil fuel chief executives who threaten the future, not those who hold up traffic.

Cop26 was a terrible confirmation that the system will allow mass death rather than interfere with the machinery of profit.

There has to be a militant mass movement to fight for change.

A devastating drought in Kenya. east Africa, underlines what climate change means. Much of the country’s north has recorded less than 30 percent of normal rainfall since September.

In some areas, dead and dying cattle litter the landscape. If no rainfall comes by the end of the year, as experts predict, it will be the third consecutive poor rain season since December 2020.

The United Nations says more than 2.4 million people are struggling to feed themselves in Kenya’s ten worst drought-hit northern and southeastern counties.

Among them are 368,000 people at “emergency” levels of hunger. This means deaths from malnutrition in households that do not have assets to sell.

In the village of Benane, Aden Gidhayes and his family already know what tomorrow’s food intake is going to be. There will be a ration of maize for the children in the morning, and one for the animals in the evening.

“If the rain doesn’t come, our animals will die, then we will all be dead,” Gidhayes told Al Jazeera news.

As always, climate change intersects with other class and power relations.

The lack of grazing land due to drought is accelerating competition between armed groups. This has particularly endangered women who are are traditionally are tasked with finding water and now have to walk many miles in search of supplies.

And the model of capitalist development pushed by the central government has also worsened people’s lives.

Fenced off conservancies, linked to elite tourism and backed by some international NGOs, were offered as a way for people to prosper.

But now these exclusive reserves deny access to poor people and their herds even in times of acute crisis.

It’s a long way from Scotland to Kenya. But the lack of action in Glasgow is directly linked to horrors such as the people starving and dying in east Africa.

Stand with the people of Sudan!

Why Black Revolutionaries Must Stand with the People of Nicaragua