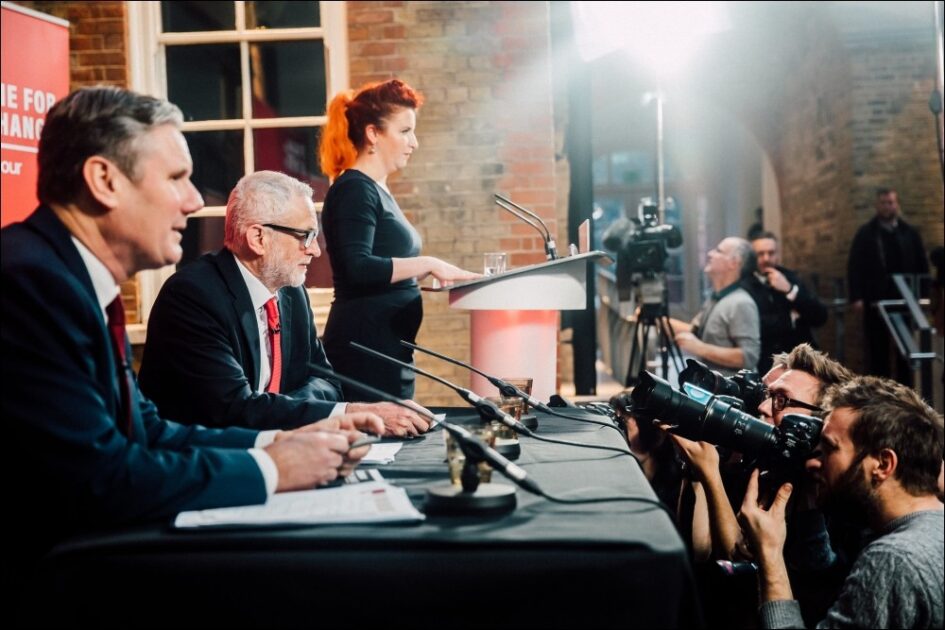 Link to this page: https://www.socialistparty.org.uk/articles/33066

Editorial of the Socialist, issue 1149 Keir Starmer is seen as a safe pair of hands by the ruling class compared to Corbyn. photo: photostream/CC   (Click to enlarge)

Trade unions must fight for a new workers’ party

The person who said New Labour was “intensely relaxed about people getting filthy rich” is now intensely happy about the results of this year’s Labour Party conference.

Architect of Blairism, Lord Peter Mandelson, is “just thrilled” at this “tremendous win for Keir Starmer”.

He said: “What these rule changes mean is that when they are asked to vote for Keir Starmer, they can know with almost complete certainty, that they are not going to wake up one day and find Jeremy Corbyn there instead”.

Since Starmer took over as Labour leader in April 2020, he has been systematically removing the threat to the capitalist class posed by Corbynism, including from Labour’s rules and structures.

The main conclusion from his conference measures must be that the workers’ politics that is so urgently needed, alongside workplace, youth and community struggle, requires the building of a new mass independent party of the working class.

The threat that Corbynism had been able to pose to the defenders of capitalism is confirmed both by the euphoria among Mandelson and his ilk and by the measures taken by Starmer.

The mass support for Corbyn’s anti-austerity programme, limited though the programme was, contained within it the danger that working-class and young people could be emboldened to fight for more, including measures that threatened the position of the capitalist class in society.

In 2015, the anger against the first five years of Tory rule needed an outlet. The right-wing trade union leaders had betrayed the mass strikes of 2011 and offered no lead.

Ed Miliband’s Collins Review was an attempt to remove the last vestiges of the trade union voice from Labour.

But the law of unintended consequences swung into action. His £3 fee for participation in a leadership vote as a registered supporter – aimed at creating a US-style primary contest to bolster ‘moderate’ candidates – instead opened a channel for anti-austerity rage, and Corbyn was elected.

Among the measures Starmer sprang on the conference was the removal of the registered supporters category, with six months of membership now required to vote in a leadership election.

Corbyn needed the support of 15% of Labour MPs to get on the ballot paper. He just scraped on – including with the support of some right wingers who thought a defeat for Corbyn would see off the left for good.

However, when their system is in crisis the capitalist class cannot always control the outcome of their actions.

Corbyn reduced the threshold from 15% to 10%, but Starmer has now upped it to one in five. With just 33 of the 199 Labour MPs nominally members of the Socialist Campaign Group, the left has no chance of getting a candidate on the ballot paper.

The Socialist Party warned from the offset that the Labour Party could not continue indefinitely under conditions of civil war between the Blairites who dominated the Parliamentary Labour Party and the councils on the one hand, and a potential new anti-austerity party on the other around those who’d joined to fight austerity.

Among the measures needed to transform the party was deselection of the Blairites. Unfortunately, the Labour left did not organise for this, accepting the false idea that unity with the pro-capitalist wing under Jeremy Corbyn was possible.

He has increased the threshold for trigger ballots to a majority of local party branches and affiliate branches combined, rather than just one or the other.

Starmer’s changes will also mean that the number of motions debated at the annual party conference will be cut from 20 to 12, while a revamped national policy forum process will shape what goes in the manifesto.

These measures constitute some of the finishing touches of Starmer’s project to return the Labour Party to Blairism: that is a party that acts in the interests of the capitalist class.

His ‘essay’, published prior to the conference, reflects this. It mentions ‘business’ 27 times but ‘socialism’, ‘public ownership’ or ‘nationalisation’ not at all.

Meanwhile, the Tories are carrying out ‘socialist’ measures – but for the rich. In response to the fuel crisis, Grant Shapps has suspended free-market laws to allow different companies to coordinate the distribution of petrol.

Capitalism isn’t working – and the government has been forced to intervene in order to shore up the capitalist system, as it did with its interventions during the pandemic.

The working class, not the billionaires, is now being expected to pay for that Covid spending through ‘fire and rehire’, pay freezes and pay insults, and falling working-class life expectancy and living standards.

The building of a new mass working-class political voice is needed as part of the fight for a society where measures are taken in the interests of humanity and the environment.

The Socialist Party is working with the RMT rail union and others in the Trade Unionist and Socialist Coalition to take steps in that direction, preparing to stand candidates in next May’s elections against Starmer’s New ‘New Labour’ councillors who’ve axed so many jobs and services.

Labour conference shows that this is an urgent task for the trade union movement. This must be under the democratic control of the membership.

The last-minute support of the Unison delegation was significant for Starmer’s victory – but Unison members had no say.

Part and parcel of building a new mass workers’ party is the struggle for democratic, fighting trade unions.

The BFAWU’s recall conference has voted virtually unanimously to disaffiliate from the Labour Party.

The union says: “The decision taken by our delegates doesn’t mean we are leaving the political scene, it means we will become more political and we will ensure our members’ political voice is heard, as we did when we started the campaign for £10 per hour in 2014.

“Today we want to see £15 per hour for all workers, the abolition of zero-hours contracts and ending discrimination of young people by dispensing with youth rates.

“The BFAWU will not be bullied by bosses or politicians. When you pick on one of us you take on all of us. That’s what solidarity means”.

Again on the transformation problem…