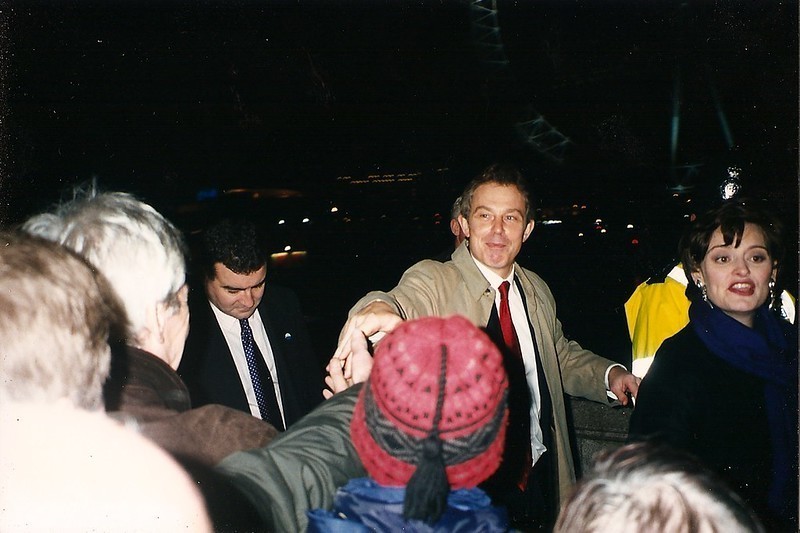 In his recent Financial Times interview, Keir Starmer said he would ‘turn Labour inside out’ and return it to the sensible politics of the Blair-Brown governments of 1997-2010. He said that Labour should embrace that legacy fully and not be ‘stand-offish.’ For the Labour right-wing, which most of the party’s MPs support, it is Blairism that is the sensible alternative, that has proved itself in practice. Corbyn and his supporters, by contrast, are regarded as mad and irresponsible dreamers, to be forced to the margins, or even out of the party altogether.

But how successful was Blairism in government?

Is it true that Blair and Brown engineered massive improvements for the lives of the working class?

The first thing to be sorted out about this question is ‘the working class where?’ Tony Blair’s determination to subordinate Britain to George W. Bush’s ‘war on terror’ gave material and ideological support to the disastrous wars in Iraq (after 2003) and Afghanistan (from 2001) that killed hundreds of thousands of civilians. Notoriously, over Iraq Blair forced through Parliament a totally false claim that Saddam Hussein had ‘weapons of mass destruction’ that threatened the West. One way or another, millions paid the price for that lie, fabricated first in Washington, and then relayed by Blair’s team in London. In early May 2003, two million people demonstrated against this mendacious prospectus, but Blair trampled on this mass opposition.

Blairism was not much of a success for the hundreds of thousands who died, nor their families, nor for the many millions who suffered from the destruction of housing, health and other state services, and the cruel embargo on Iraq prior to the 2003 start of the war. The infrastructure of Iraq and much of Afghanistan was wrecked. Not much of a success for the working class there.

In 1997 Blair and Brown won the election under the banner of ‘New Labour.’ This they based on a core project, one that should be a key part of its balance sheet. Gordon Brown as Chancellor would allow the neoliberal, allegedly ‘free market’, finance-based economy to rip, thus generating huge expansion of profits that would automatically create substantial increases in tax revenues. Tax revenues, that may be used to improve public services and support the poorest sections of society. How did this work out in practice?

A moment’s thought reveals the illogicality in this project. The price of safeguarding the neoliberal economy was the continued stifling of the trade unions, which allowed the awful practices of labour ‘flexibility—including zero-hours contracts—to widen inequality and push down wages. New Labour did bring in a national minimum wage, against Tory and employer protests, but this was set at a very low level. It was not a living wage. New Labour responded to continued poverty by introducing ‘working tax credits’ and child tax credits, benefits that could be claimed by workers earning very low wages. At first blush it might seem more logical to rid the economy of the scourge of low pay, but that would have interfered with the prerogatives of business and profit, the central belief of Blairism. With higher wages, New Labour believed, investors might go elsewhere.

A key indicator of the success of the New Labour anti-poverty strategy was child poverty figures. When Labour came into office, 26% of children lived in poverty. When Labour left office 13 years later, the figure was 20%, factoring in tax benefits and the Education Maintenance Allowance, the £30 a week for older school students to pay for fares and lunches. For many families, EMA was a significant part of the family budget.

The six per cent reduction of child poverty might seem like a success, but 20% of children living in poverty is still an awful figure. Only massive poverty reduction overall could have made a big dent in child poverty figures.

The Blair-Brown governments spent enormous amounts on the NHS, education and transport. There were 70,000 new nurses, 118 new hospitals and 188 new GP practices. Many new schools were built and the London Tube was renovated.

However, the impact of these things was damaged by the New Labour culture of targets, inspections and constant re-organisation, things that made it very difficult for teachers and doctors to do their jobs. In the NHS, waiting times targets remained very high (18 weeks for a consultation) and were not always met.

In addition, Labour had carried out its infrastructure investment by enacting a Faustian pact with the future: public-private partnerships, called the Private Finance Initiative. In effect, these amounted to huge borrowing from finance capital to be paid back with massive interest payments over long periods of time. This has resulted in financially hobbling the budgets of key public services for the indefinite future. For example, some London health authorities have to pay more than £1 million a month in interest payments—before they start calculating what cash remains to actually spend on the NHS. The inevitable result will be declining public services, and the need to progressively seek private alternatives.

The Private Finance Initiative was part of a wider project of privatisation throughout the state and local government sectors. While the privatisation of Royal Mail was the centrepiece, outsourcing of goods and services effectively pushed large parts of the public sector into private hands, with lower wages, worse conditions and often higher costs. Everything from the probation service to roads and of course in health and education (through so-called academies) was up for grabs and private profits.

The Blairite economy had other disastrous long-term consequences. Widespread poverty went alongside a housing boom, and a consumerist spectacle based on the middle class and better off working-class incomes. To function at all in the housing market, to keep up with skyrocketing rents and prices, millions of people were compelled to turn to debt, either bank loans, credit cards or payday lenders. The digital economy created new basic needs, like smartphones, computers and internet access. Workers could not function in a zero-hours contract job or access basic services without a smartphone.

To maintain families at a basic level of necessities and consumer goods, borrowing became the norm. Huge levels of debt were built up among families, but also by banks and companies. The British debt economy meshed with the American debt economy in a giant and dangerous economic timebomb, that exploded in the face of New Labour in 2007-8.

We should be absolutely clear. Bank debt was based on greed, but consumer debt in the working class was based on the disparity between the prices of basic goods, especially housing, and the average income of workers. Millions of young people, in particular, lived that period (and today) on the basis of being two utility bills away from bankruptcy. Tax credits could not stop this growing and basic structural crisis.

When the debt economy came crashing down in Britain and the United States in 2008, people blamed those in government. In the UK the Tories and Liberal Democrats were able to utilise this in the false claim that New Labour was responsible for the economic crash. In fact, New Labour were only secondary accessories to economic larceny, which led to huge levels of austerity, for which the working class was expected to pay.

The Tories and Lib Dems in power from 2010 set about dismantling the good things that New Labour had done, like EMA and Sure Start centres that focussed on child health. All the Tory counter-reforms made things worse for workers and the poor.

But the balance sheet has to be that Blairism in power failed to challenge the structures of neoliberalism that were driving, and still drive, increasing levels of poverty and inequality.

To check out this indictment of Blairism in government, go to any one of dozens of post-industrial towns in the North of England. From the time Thatcherism de-industrialised Britain in the 1970s, these towns have been mired in poverty, as can be seen at a glance both in the dreadful state of the housing stock. Since the 1970s nothing much has changed in terms of the poverty and inequality that these towns and cities bear witness to. The odd patch of gentrification and regenerated shopping centres hasn’t touched the living standards of most of the population, nor helped to overcome the structural poverty they are stuck in.

Blair’s obsession with education, one of the drivers of Ofsted’s increasingly narrow and authoritarian education concepts, didn’t ultimately promote social mobility. No society can educate its way out of poverty and social inequality, in the absence of real jobs, well-resourced social services and affordable basics like housing, health and utilities.

The poor areas of Northern towns didn’t change much during the Blairite years. They were poor before, poor during, and poor after the Blair-Brown regime. And key social benefits like unemployment benefits and state pensions remained very low compared with similar countries like Germany and France.

New Labour’s lack of social and economic transformation was underpinned not only by labour ‘flexibility’, but also by the obsession with low taxes—especially low levels of corporation tax. Blairism believed the opposite of ‘tax the rich’, indeed it was the period when huge bastions of transnational capital like Amazon and Starbucks caught on to the fact that Britain was mainly a tax-free environment for their businesses.

Obsession with the rich

The Blairites, especially Tony Blair himself but also key flank-guards like Peter Mandelson, were personally obsessed with courting the rich and famous and handing out knighthoods and other honours to them. This obsession with the rich and celebrities has continued with Tony Blair and some of his most prominent cabinet ministers.

Geoffrey Wheatcroft said the great passion of Tony Blair’s life was hatred of the Labour Party. Not quite right—actually it was only hatred of that part of the Labour Party that wanted it used as a vehicle of social justice and, ultimately, socialism. Ditto Keir Starmer today. The continuous churn of the expulsions and suspensions gives a clear message: as far as the right-wing MPs and party apparatus is concerned, the party’s Left is surplus to requirements.

As Polly Toynbee and David Walker point out, another key indicator of the fragility of Blairism in terms of structural change, was how easily and quickly its innovations were undone by the incoming Tory-Liberal Democrat government after 2010. Compare that with the long-lasting effects of the radical reforms of the Labour government after 1945.

Phil Hearse is a member of Anti*Capitalist Resistance and joint author of both Creeping Fascism and System Crash.