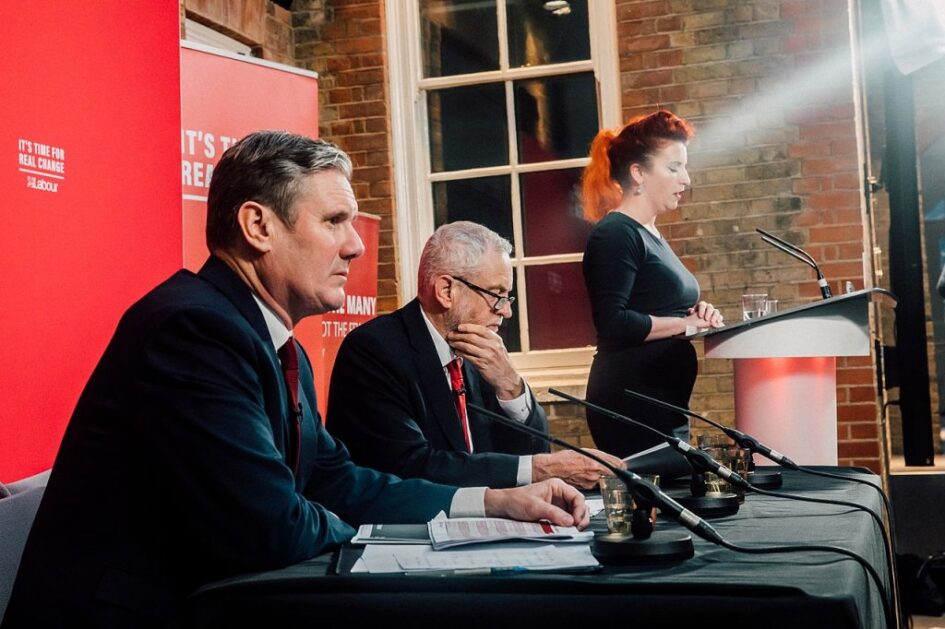 Finlay Conti and Gus Woody look at the Labour Party’s history to understand the meaning of Starmer’s purge, what it tells us about Labour’s inability to represent the working class, and how Marxists go forward from here.

Since the ascension of Keir Starmer to the Labour leadership after Corbyn resigned in the wake of the 2019 General Election, the demarcation lines between the wings of the Labour Party have continued to sharpen. Corbyn’s time as leader was marked by an allergy to purges: Starmer displays no such concern. In mid-July, internal Labour sources reported plans for a proscription of several groups: Labour Against the Witchhunt, Socialist Appeal, Resist, and Labour in Exile Network. The purge, which was enacted on Tuesday’s meeting of the National Executive Committee (NEC), is clearly a desperate deplatforming of the ‘hard-Corbynites’ and an affirmation of Starmer’s ‘strong and stable’ leadership in the wake of electoral and oppositional underperformance. As Marxists we need to make a concrete study of this situation, the basis of this purge and how we respond to it.

Starmer has crafted himself an image as a Little Bonaparte: an officer of the old radicals coming to power in a moment of crisis and demoralisation who, in his quest to unify the party, further distances himself from the values of his predecessor and empowers the only class capable of providing him any impetus. All factional demagogues come to office on the back of a reconciliatory programme: Starmer promised to take the values which underpinned Corbyn’s successes and free them from the fetters placed on them by smears and plotting. Yet now his initial promise of party unity through its ‘radical values’ has become party unity through iron-fisted proscription and the hegemony of the Labour Right. His empowerment of men like Lord Mandelson and David Evans, famous figureheads of the Right, has led to increased dominance for the Labour Right and further rolling back of the Labour Left’s representation in the shadow cabinet and party structure.

It’s beyond question that Starmer is a man of the Right, but we have to ask whether he represents an aberration in the history of Labour’s leadership or whether he is a return to the norm temporarily displaced by Corbyn’s unexpected victory. In his ground-breaking history of the Labour Party, Parliamentary Socialism, Ralph Miliband quite succinctly summarises the politics of Labour’s leadership over several generations. Knowing the origin of the party in the trade union movement and the widening of working class suffrage, they have always been deeply uncomfortable with the suggestion that Labour is a ‘working class’ party. Miliband argued they always repudiate this perceived class character, in part because of their fear ‘it would antagonize ‘floating voters’’. They ‘have always sought to escape from the implications of its class character by pursuing what they deemed to be ‘national’ policies. Thus, Labour constantly panders to its Right, seeking to be perceived as ‘responsible enough’ to govern, capitulating to British imperialism and cloaking itself in the flag. Where there is conflict with the Labour Left, whether with ‘Bevanites’ in the 1950s or ‘Corbynites’ today, the end result remains shockingly similar, hollow calls for unity, supported by elected figures from the Labour Right and Left. The overall political goal remains the same – electing a Labour government, irrespective of how flimsy its actual commitment to the working class is. Labourism has at its core a demand to put party above class.[i]

At the end of the day the Labour Party has come to represent a specific class: the progressive petty bourgeoisie. The Left and Right wings of the Liberal Party found themselves annexed by the Labour Party and the Conservative Party respectively once universal suffrage made the worker a properly electoral subject. Whilst Labour presents itself as a party of the working class, it is institutionally a party of the petty bourgeoisie which seeks to offset its class weakness by conceding reforms to the working class. We can’t mistake Starmer’s invocation of social chauvinism as something out of the ordinary for Labour: Attlee bombed Malaysia, Wilson oversaw the early Troubles, Callaghan enjoyed the same, and Blair was Blair. It’s no surprise that Starmer mirrors Johnson in his (albeit more ‘progressive’) chauvinism: Labour is a party of the nation, of its ruling class. Starmer is not a demon possessing the Labour Party. He is its true soul coming back for what’s his, and this must include an overturning of the past leadership’s modest changes.

What does the Purge Mean?

Purging of dissidents within the Labour Party has a dual nature: on the one hand, Starmer can quell the Right’s bloodlust and secure his leadership; on the other hand, Starmer can cut the heads off of the ‘unacceptable’ bodies for whom Corbyn’s leadership was a moment in the limelight, and further push the hostile environment policy aimed at the Socialist Campaign Group (SCG). That he can refer to his targets as ‘extremists’ allows Starmer to import a strategy of dehumanisation where those who fall foul of the leadership are no longer ‘party members’, but rather a fifth column of anti-semitic wreckers in alliance with communist elements who want to pervert Labour’s pleasantly British spirit. His thirst to appear like the Labour leaders of the Cold War (great crusaders against Communism like Ernest Bevin) threatens to choke him if his actions are without determination.

Labour’s annual conference, held in the last week of September, will reveal which faction of Labour holds the right to its future for now. If Starmer purges organisations aligned to one wing of the party he will set off a mechanism whose conclusion is inevitable: the total pacification of any sufficiently organised element of the Labour Left in one form or another. Hurting your enemy will only strengthen their determination: the goal now is to kill them. The purge can only go in either the direction of a series of party purges expanding on one another, or the beginning of the end for Starmer’s leadership. If Starmer’s support base tastes blood, then putting a stop to this process will be near impossible. Of course, the end of Starmer is not the end of the Right and the loss of a figurehead is not the loss of their hegemony. Starmer’s failure would coincide with an already demoralised and structurally weakened Labour Left who could do little more than vocally protest at the actions against Corbyn and Long-Bailey.

There is a conclusion of wide implications to be derived from this purge: Labour’s structure is of a party reliant on dragging along another more numerous class, whilst ensuring this class never takes leadership of the party. This is why the party’s structure favours the despotism of the Parliamentary Labour Party (PLP) over the rank-and-file membership. Heroes of the Labour Left like Tony Benn made their struggle the fight for negating the PLP’s strength, failing to realise they were struggling on the very structure that assured it. You can hang a man with the rope he sells you, but the PLP has never risked loosening its grasp of the rope.

The question of Marxist strategy in Britain and Labour’s place within it has been a point of contention since the first period of Marxist political activity in Britain. The purge has not been designed to ‘wipe out’ the Marxist Left in Labour, an insignificant current hardly akin to its Militant ancestor, but is part of a wider assault on the most fundamental Leftist propositions and not necessarily those purely of a Marxist nature. Whilst this is the case, it can’t be ignored that one group on the list will be cast into existential danger by the purge: Socialist Appeal.

Corbyn’s election as leader provided Socialist Appeal with the possibility of an open party environment to test its strategy of entryism with real optimism. Of course, Corbyn’s leadership was beset on all sides and the open environment became a further continuation of the structural domination of the PLP (albeit with the mobilisation of Momentum and other ‘grassroots’ organisations to defend Corbyn). Socialist Appeal was spared the danger of real attacks from the Right, considering it was generally irrelevant to them, but the conjuncture has called for sacrificial lambs and since Momentum is too big a fish to fry, Socialist Appeal will fit the bill.

Whilst Socialist Appeal must be defended on principle as Marxists against the Labour Right, we must also be honest in understanding that this precarious position is born from their trust of Labour as a party, which can only call for one response: Labour is not our party. We will never find love in Labour as Marxists, we’ll only find the structurally dominant elements of the ruling class’ ‘progressive’ wing waiting to fetter our movement, smear our ideas and eventually proscribe our very presence. Starmer’s purge has a lesson to learn: our struggle is not for Labour, but against it. As Marxists we seek to follow the most advanced elements of the working class in their struggle for self-emancipation and in doing so, give articulation to these advanced elements, expand their hegemony in the working class as a whole and develop it into a weaponised organ. There exists no force in the working class which dilutes advanced elements with reformist concessions and electoral cycles so efficiently as Labour. It does not give representation to the revolutionary working class, it carries it off the stage in a stretcher.

Starmer’s offensive coincides with Gerard Coyne’s bid for General Secretary of Unite and this suggests a parallel to take note of. We can struggle in the working class whilst struggling against the party which has hegemony over it; we can fight in the organs of workers struggle, in trade unions, with a goal of turning them against Labour and for workers’ political self-determination, rather than smothering it under the despotism of a parliamentary few with another class interest at heart.

[i] Ralph Miliband, Parliamentary Socialism: A Study in the Politics of Labour, (London: Merlin Press, 1964) p 348