State Socialism and The Communist Manifesto 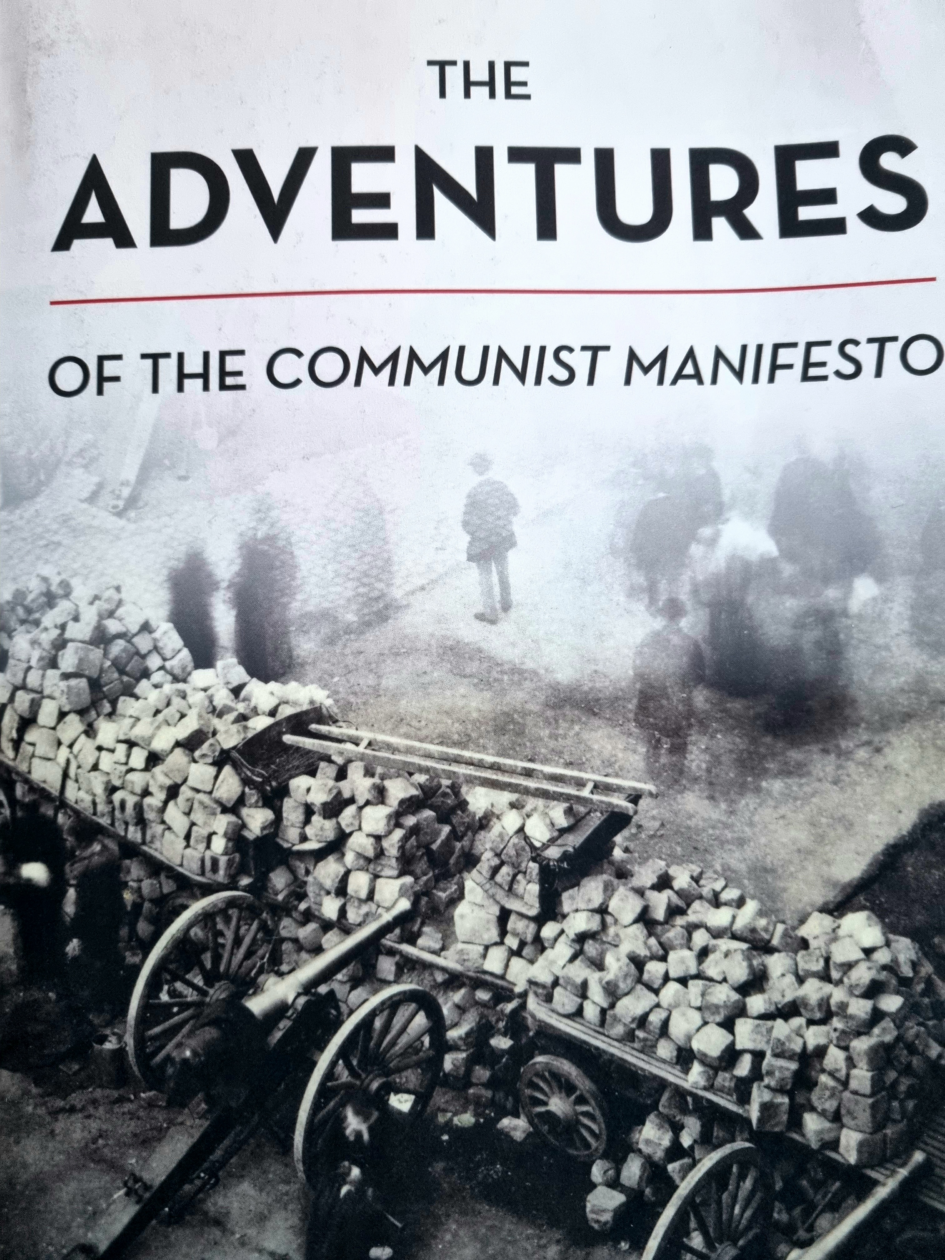 In the Communist Manifesto Marx states that ‘the first step in the workers’ revolution is the elevation of the proletariat to the ruling class, the winning of democracy.  The proletariat will use its political rule to wrest bit by bit all capital from the bourgeoisie, to centralise all instruments of production in the hands of the state, i.e., of the proletariat organised as ruling class . . . ‘

There then follows a set of demands that ‘will naturally be different depending on the different countries.  For the most advanced countries, however the following can be put into effect fairly generally.’  There is then a list of ten demands of which the most relevant for our purposes are –

‘5 Centralisation of credit in the hands of the state through a national bank with state capital and an exclusive monopoly.’

‘6. Centralisation of the whole transportation system in the hands of the state.’

‘7. Increase in national factories and instruments of production, reclamation and improvement of land in accordance with a common plan.’

These demands would appear to entail the introduction of socialism through actions of the state – albeit with the vital condition that this is a state in the hands of the workers – with state control of industry etc. under a centralised plan as the objective.  This is in obvious contrast to Marx and Engels antipathy to (capitalist) state ownership and control as noted in previous posts; their opposition to a putative necessary role for the state in sponsoring workers cooperatives; and the prominent role they give to cooperatives in the development of the working class, its movement, and its heralding of a new socialist society.

To anticipate the argument to be presented: the Manifesto was written quickly, in particular circumstances, and, more importantly, at an early part of Marx and Engels’ political careers, including before their experience of the Paris Commune.  However, none of this explains, or rather explains away, these passages since much of what is written in the Manifesto Marx and Engels defended for the rest of their lives.

If we take the opening lines quoted above: ‘the first step in the workers’ revolution is the elevation of the proletariat to the ruling class, the winning of democracy’, it must be said that while control of the state is required to secure the rule of any ruling class, such control does not make a class the rulers of society.  Only in relation to the means of production can a class be constituted as the ruling class.  Even were the working class to ‘win democracy’ it would not yet be a ruling class unless this democracy included its ownership and control of society’s productive powers.

Of course, Marx goes on to say that ‘the proletariat will use its political rule to wrest bit by bit all capital from the bourgeoisie, to centralise all instruments of production in the hands of the state’ but again, the state is a separate body of men and women and cannot be considered to be synonymous with the working class.  So, if the state has its hands on the means of production it means the working class does not, and this is true even if the workers state is democratic.  As noted before, state title to the productive resources of society would only be consistent with effective workers’ ownership if it performed the negative function of preventing alienation of particular factories etc from the collective ownership of society and their appropriation as private capital.

Immediately after the ten demands, Marx states that ‘when, in the course of development, class distinctions have disappeared and all production is concentrated in the hands of the associated individuals, the public power loses its political character.’

As Marx then says, ‘political power in its proper sense is the organised power of one class for the oppression of another.’  For the ‘public power to lose its political character’ the state would therefore have to cease to exist, but how does production leave its hands and come into the hands of the ‘associated individuals’?

The socialist scholar, Hal Draper, states that the term ‘winning the battle of democracy’ (in one translation of the Manifesto) was cryptic and reflected Marx’s lack of certainty over whether this meant the victory of the democratic bloc existing in much of Europe at the time, that did not seek to go beyond capitalism or bourgeois rule, or outright proletarian rule as might be thought given the context.

The first edition of the Manifesto was in German and at this time only a bourgeois revolution was immediately anticipated in Germany – “the Communists turn their attention chiefly to Germany, because that country is on the eve of a bourgeois revolution . . .”  The ten demands can be better understood as the programme of a radical bourgeois revolution that the working class would support in light of its own weakness and inability at that time to achieve its own class rule.  This incapacity did not however mean that the working class was ever to cease for a minute to organise to defend and advance its own particular interests.

In the later 1872 German preface to the Manifesto Marx makes the following points:

‘However much that state of things may have altered during the last twenty-five years, the general principles laid down in the Manifesto are, on the whole, as correct today as ever. Here and there, some detail might be improved. The practical application of the principles will depend, as the Manifesto itself states, everywhere and at all times, on the historical conditions for the time being existing, and, for that reason, no special stress is laid on the revolutionary measures proposed at the end of Section II [the ten demands].’

‘That passage would, in many respects, be very differently worded today. In view of the gigantic strides of Modern Industry since 1848, and of the accompanying improved and extended organisation of the working class, in view of the practical experience gained, first in the February Revolution, and then, still more, in the Paris Commune, where the proletariat for the first time held political power for two whole months, this programme has in some details been antiquated. One thing especially was proved by the Commune, viz., that “the working class cannot simply lay hold of the ready-made state machinery, and wield it for its own purposes.”’

The Manifesto speaks of the proletariat using its political rule to wrest bit by bit all capital from the bourgeoisie, to centralise all instruments of production in the hands of the state, i.e., of the proletariat organised as ruling class . . .’  It goes on to say that this involves ‘measures which seem economically inadequate and untenable but which in the course of operation drive beyond their own limits, and are unavoidable as a means of transforming the whole mode of production.’

These might seem to have some correspondence to Trotsky’s approach laid out in the Transitional Programme, but here they relate to measures to be implemented following the already achieved ‘political supremacy’ of the working class and not the programme that precedes it.  In this context it should also be said that a ‘transitional’ approach that substitutes demands for expropriation by the (capitalist) state in place of workers’ expropriation is a very different approach and involves a different transition.

‘the Manifesto was one of the few writings in which Marx spoke in terms of state ownership of the means of production.  He usually left open the question of the forms of social ownership, which might include workers’ associations and cooperatives.  The emphasis in the Manifesto reflected the emphasis in the movement for which it was written at the time.  State ownership (by a workers’ state) was, to be sure, one form of social ownership for Marx.’

Draper also endorses the view that the demands were not specifically those of Marx or Engels but already existing and agreed demands of the Communist League, for whom the Manifesto was written.  He also notes the extent that some other specific demands did not represent Marx’s own views, (in The Adventures of the Communist Manifesto).

These demands accord with other programmatic statements such as The Demands of the Communist Party in Germany, which were set out as the programme to be adopted in what was understood to be a radical democratic revolution, but not yet a working class and socialist one.  In the Manifesto Marx employs the argument about their transitional nature in order to cover this (rather wide) gap, but their realisation would not achieve socialism even if it would strengthen the existing position of the working class and its future struggle.

Like Engels in Anti-Duhring, the prospectus is of the state dying following working class revolution and the means of production becoming the property of the associated producers, i.e. the working class.  Since no capitalist class would now exist, and no other class could have ownership of the means of production, all class distinctions are removed and the division of society into classes disappears.

In this process many questions arise as to sequence, timing and agency and the telescoped summary in the Manifesto can only be properly considered with due regard to the development of Marx’s views at that time.  It is possible to quote Marx and Engels in favour of state ownership but not possible to make this consistent with other major statements of view; with the consistency of their overall perspective and programme, or their foundational beliefs.

Two years after the publication of the Manifesto Marx, when he still had hopes for an approaching revolution, hoped that the communists could “make the revolution permanent until . . . at least the decisive forces of production are concentrated in the hands of the workers.” (Address of the Central Committee to the Communist League)

Socialism from the State