Still Waiting for Freedom: A Review of P. Sainath’s The Last Heroes 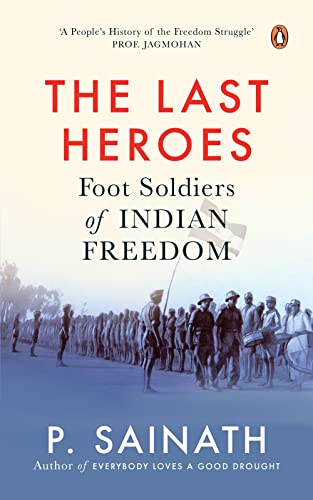 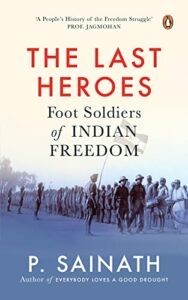 Here’s one possible trajectory for ambitious print journalists. After making your name with aggressive reporting at a smaller newspaper, move up the ladder until you are at a top paper with a prestige beat. Go on the television talk shows to pontificate. Maybe snag a regular column. Offer analyses that seem critical but make sure never to challenge the conventional wisdom. Hire an agent who can get you handsome speaking fees on the lecture circuit.

Here’s P. Sainath’s trajectory. After making your name with aggressive reporting at a smaller newspaper, jump off the typical career track and go to the Indian countryside to report on the most vulnerable people. After those stories are a surprise hit with readers (surprising, at least, to editors), turn them into a best-selling book (Everybody Loves a Good Drought, in its 60th printing since publication in 1996). Then head back to the countryside to keep reporting on the people who are more vulnerable than ever because the country’s politics and economics have grown harsher and more punitive. Ignore almost all the invitations to go on television. Give lectures wherever invited, especially for audiences of young people, usually for no money. Mentor and support young journalists, especially those from the countryside. Keep challenging both the smug liberals and the increasingly reactionary right-wing, even as it becomes more dangerous to do so. And when you are at the top of your game, leave a secure job with a top newspaper to create an online experiment in rural journalism to document (in 14 languages) the lives of ordinary people who live far from glamorous city life, with a budget that is never enough to adequately reward the work of staff and a network of volunteers around the country.

After all that, Sainath has found time to write a new book based on interviews with the courageous fighters from India’s struggle to liberate itself from British imperialism, which finally came in 1947. But The Last Heroes: Foot Soldiers of Indian Freedom is more than just history, emphasizing the ongoing struggle: While independence was won, the work of creating a truly free society remains as difficult as ever.

I’ve been following the unique career of Sainath since I met him at a conference in the United States in 1998. When I was teaching at the University of Texas at Austin, I always included his work in my introductory journalism class, to offer students a model for what is possible in the profession. Screening a powerful documentary film about his work, Nero’s Guests: The Age of Inequality, was a highlight of every semester.

So, when I picked up The Last Heroes, my expectations were high. But the book delivers, above and beyond expectations.

Sainath focuses not on the famous leaders of the freedom struggle but on some of the many thousands of unsung heroes, the people in history who are at the heart of social and political movements—the people who make it possible for leaders to become famous. In this case, some of the heroes Sainath interviews are invisible in a second sense—they do not appear on the official government list of freedom fighters who eventually became eligible for pensions. Some of them wanted no compensation; Sainath quotes one as saying, “We fought for freedom, not for pensions.” Others, especially women, weren’t considered fighters even though they took incredible risks and made invaluable contributions to the struggle.

In between working on other projects, Sainath has been interviewing these fighters for more than two decades, aware the time is running out as they grow older (some have died since being interviewed). In The Last Heroes, Sainath gives their stories the attention they deserve.

It’s hard to pick a favorite fighter from the book, but I’ll go with Hausabai Patil—“Rebel, Actor, Soldier, Spy”—who died in 2021 at age 95. The reference to “actor” in the chapter title comes from her role in pretending to be an abused wife, luring police officers away from the station so others could steal weapons. Recounting the story 74 years later, she tells Sainath she still thinks her “husband” in the drama hit her too hard, though that husband argued the scene had to look authentic. That kind of detail brings these stories to life, and is an example of the sense of humor that so many of these fighters maintained.

But the freedom struggle, and struggles that came after, remain deadly serious business as well. That’s reflected in another favorite chapter, about Captain Bhau, the nom de guerre of Ramchandra Sripati Lad, who emphasized the difference between independence and freedom. Sainath quotes the Captain:

“We dreamed of bringing freedom to the common man. It was a beautiful dream. We did achieve Independence.” And he is proud of that. “But I don’t think the larger dream was never fully realized … today the man who has money rules. This is the state of our freedom.”

The book is painfully relevant today, as many of the stories circle back to the dream of freedom still not realized. Today, that failure in India is seen most dramatically in the power of the Hindu right, represented by the current prime minister and ruling Bharatiya Janata Party (BJP), with their dreams of a “pure” India unsullied by alleged outsiders. Sainath points out how different this current ideology is from the work of the freedom fighters:

The stories in this book were done over many years and multiple interviews. Among the people in it are Adivasis, Dalits, OBCs (Other Backward Classes), Brahmins, Muslims, Hindus and Sikhs. Also, women, men, and very young children (many of these fighters were active even before they entered their teens). They spoke or speak different languages. They are from different rural regions, cultures and backgrounds. They include atheists and believers.

They had this in common, though: their opposition to Empire was uncompromising. They were aware of the risks they were taking. They had a vision, an idea, of the freedom they were seeking. They never stoked or drummed up hatred against “other” communities. They fought the British Raj, not their fellow Indians.

And the book’s lessons are not just for Indians. Mallu Swarajyam, at age 84 in 2014, demonstrated how to use a leather slingshot to an audience of young 1,500 tech workers in a Hyderabad auditorium, “to the alarm of some in the audience in closest range.” Through a translator (she never read nor spoke English), she challenged her audience, invoking a U.S. movement:

“People like you have been at the forefront of the Occupy Wall Street movement. There is so much you can achieve if you fight. The slingshot was my weapon, the cell phone and the laptop are yours, as are so many other technologies I cannot even name.”

Many of these stories first appeared on that online project the Sainath launched in 2014, the People’s Archive of Rural India. If all one knows about India comes from Bollywood and the high-tech industries, PARI offers a revealing look into life in the Indian countryside, where more than half of Indians live. It’s called an archive, but it is really an example of the best of journalism—stories that highlight the abuses of the powerful and celebrate the lives of ordinary people.

Sainath would reject being called a journalistic hero, but he and his colleagues at PARI are engaged in a truly heroic effort to tell the stories that so desperately need to be told, of the battles fought years ago and the battles that remain.

Paul Éluard: To the heroes of the Democratic Army of Greece