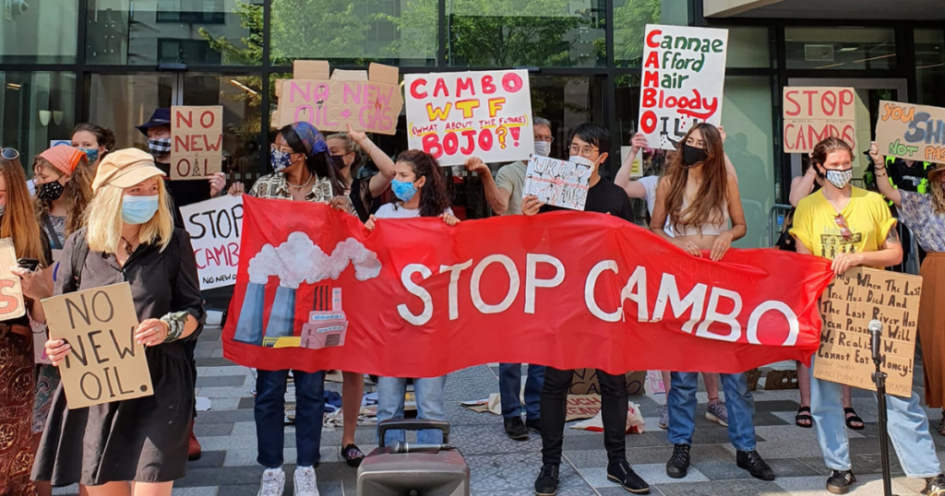 Pete Cannell, an activist in Scottish environmental group Scot.E3, looks at the political significance of the growing campaign to prevent the development of new oil and gas fields in the North Sea

On Monday 19th July twelve climate activists blocked the entrance to the UK Government hub in Edinburgh, demanding that plans to give the green light for a new oilfield west of Shetland be scrapped. Later in the day they were joined by another 200 ‘Stop Cambo’ protestors.

With the United Nations Climate talks, COP 26, due to start in just over 3 months’ time the Stop Cambo campaign is shining a harsh light on what passes for UK climate policy. Throughout the year Westminster has been ramping up announcements on ‘Net Zero’ climate initiatives. We’ll see many more in the run up to the COP. You might think that developing a new, deep water, oil field would fit uncomfortably with all of this. And indeed, some critics are calling out Boris Johnson for hypocrisy. But the truth is that giving the green light for a new oil field is no aberration or hypocritical deviation from otherwise well-intentioned policies. On the contrary it’s a core part of UK and Scottish government policy that aims at maximum economic extraction of hydrocarbons from the North Sea. And us such it provides a critical lens through which all this year’s announcements should be viewed.

The blueprint behind Tory plans is not hard to find. It was released earlier this year without a fanfare. On the 21st of March, Oil and Gas UK published the North Sea Transition Deal, a plan for continuing exploitation of North Sea Oil and Gas to 2050 and beyond. The deal is a tripartite arrangement between the big oil and gas companies and the UK and Scottish governments. It maps out a plan to continue extracting oil and gas from the North Sea. The idea is that at some point in the future carbon capture and carbon offsetting will allow the government to claim that they have achieved Net Zero. In this world Net Zero doesn’t mean the end of oil and gas production. The theory is that the carbon contained in the oil and gas extracted from the North Sea is either trapped in underground storage or compensated for by carbon retention measures elsewhere.

The whole concept of Net Zero as developed in the Transition Deal is deeply flawed. For a start, UK and Scottish emissions reduction targets don’t include the carbon extracted from the North Sea. These greenhouse gas emissions are attributed to users of the products that derive from the oil and gas. So, Oil and Gas UK can talk blithely about a zero carbon North Sea oil sector because it takes no responsibility for end use. But even if you accept the bizarre logic of extracting hydrocarbons while taking no responsibility for a large part of the emissions you produce, the core technology that underpins carbon capture is speculative and untested. Currently, there is nowhere in the world where carbon capture and storage operate at large scale. And even if it can be made to work at large scale there will be many more years of greenhouse gas emissions before it has a serious impact.

Alongside continuing use of fossil fuels and carbon capture the North Sea Transition Deal also reserves a key role for hydrogen in transport and in domestic heating. Some of the hydrogen will be ‘blue’ produced from hydrocarbons, some ‘green’ the result of electrolysis of water. Without carbon capture ‘blue’ hydrogen is a major source of carbon emissions. ‘Green’ hydrogen, produced using electricity generated from renewables, is carbon free but immensely inefficient requiring a huge ramping up of electricity production from wind, tidal and solar power. There’s certainly a place for green hydrogen in a renewable energy mix but only for where direct use of electricity is impractical. From any other perspective except that of an oil and gas company direct use of renewably generated electricity makes obvious sense.

The Sea Change report, published in May 2019, shows how continuing production of North Sea oil and gas is incompatible with meeting the UK’s climate targets, let alone meeting the UK’s historical responsibility to the global south as one of the biggest emitters of greenhouse gases over the last two centuries. The report also shows how a planned, and fairly rapid, shut down of North Sea operations could maximise employment opportunities in renewable energy.

It was striking that all the speakers at the Stop Cambo rally highlighted the need for workers to be at the centre of the transition away from oil and gas. Just Transition has become the common sense of climate activists in Scotland. And climate is finally on the agenda of the trade union movement. At the Scottish Trades Union Congress in April three of the composited motions focused on the issue. But there is a real challenge here. The STUC motions proposed by Unite, GMB, Prospect and the RMT tail the business-as-usual agenda that is driven by Oil and Gas UK and supported by Westminster and Holyrood – support for continuing extraction of oil and gas, carbon capture and a hydrogen economy. There’s a need for a sharp debate. The politics and practice of transition can’t be ducked by either climate activists or workers.

Even if the untested technologies on which Oil and Gas UK’s strategy is based work, Net Zero will not mean no net emissions, but simply shift responsibility for emissions elsewhere, often to the global south. And business-as-usual also means a continuing drive for profit maximisation, low wages, and precarious employment. Just Transition is not possible on the back of the North Sea Transition deal.

For Just Transition to become more than a slogan, we need to win workers to the need for mass working class action over climate. At this moment in our history class and climate are deeply intermeshed. Fighting for a future for our children and grandchildren with a transition strategy that provides a real chance of avoiding a climate catastrophe goes hand in hand with winning decent jobs and conditions, fighting racism and gender oppression and building workers’ power. The need is obvious, but the making it happen requires a political break from the union/employer partnership approach which underlies existing trade union policy.

Cambo is just one more piece in the jigsaw of the fossil fuel economy that needs to be dismantled. However, decision to go ahead or not is politically important. Boris Johnson wants to milk the UK’s hosting of COP26 for all its worth. It will be embarrassing if developing new oil and gas fields is foregrounded in news from the COP and that may mean a decision is postponed until 2022. Not because the UK is out of line with the other industrialised nations participating in the COP – relying on carbon capture and other techno fixes is in line with the thinking that has informed the COP process over the years. A public outcry over Cambo in the run up to COP26 can help blow away the mist of greenwashing that will be generated around the Glasgow talks, and help to push the climate and union movements in the direction of a radical worker led strategy for system change, not climate change.