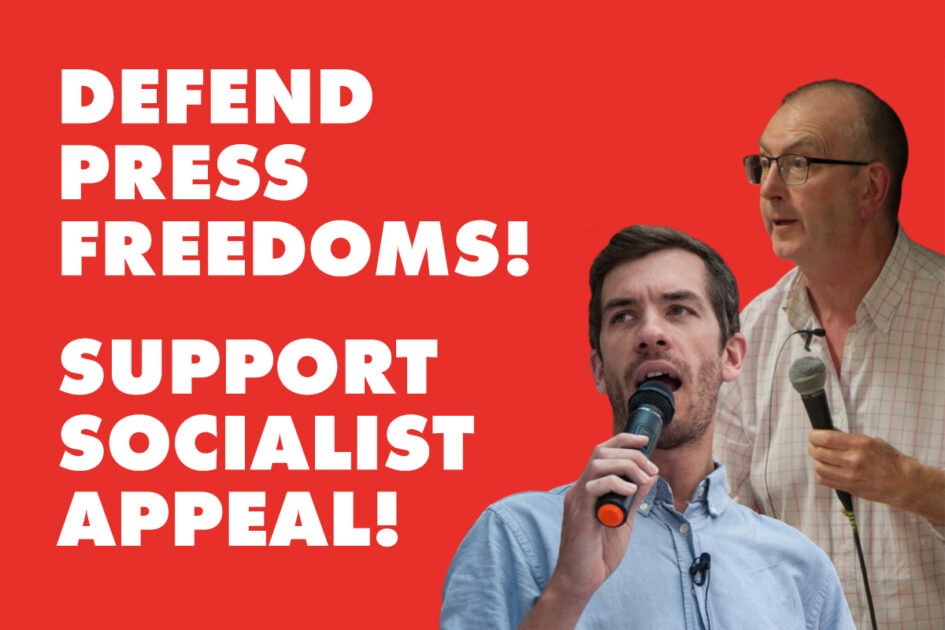 In a scandalous attack on press freedoms, the Labour bureaucracy has barred Socialist Appeal journalists from covering the party’s upcoming annual conference.

This outrageous move shows how far the Labour right wing will go to suppress ideas they deem dangerous; to explicitly ban Socialist Appeal – the Marxist voice of Labour and youth.

We call on our readers and the rest of the labour movement to denounce this brazen assault on the left – and on the basic democratic principle of freedom of the press.

The hypocrisy and double standards stink. While left-wing journalists are prevented from covering the Labour conference, a veritable rogues gallery of outlets are being allowed in, no questions asked.

From the Murdoch press, including reactionary rags like the Sun; to the rest of the Tory media, such as the fascist-supporting Daily Mail; to mouthpieces of big business and the establishment, such as the Financial Times and the BBC: all of these right-wing scoundrels, and more, will be present in Brighton next week.

Socialist Appeal journalists, however, will explicitly be denied entrance.

As with previous Labour conferences, Socialist Appeal editorial board members Rob Sewell and Adam Booth were planning to attend this year’s event, which begins on Saturday.

Both writers had been granted press access at the last Labour conference – held two years ago under Jeremy Corbyn’s leadership – without any problems.

However, a week ago, both comrades – who are registered members of the National Union of Journalists (NUJ) – received a blunt response from the Labour conference arrangements team, informing them that their application for press passes had been rejected, for not having “the relevant portfolio”. This is despite the fact that Rob has been a socialist journalist for over four decades!

Rob and Adam appealed this decision, only to receive an even more curt message from the Labour press office, saying: “Thank you for your email. But we will not be approving your application on this occasion.” At this point, the NUJ were brought in, in the hope that some light could be shed on the reasons behind this decision – a decision that prevents two bonafide journalists from doing their job.

The NUJ general secretary contacted Labour HQ, and was given an equally brusque reply, which is worth quoting in full:

“Rob Sewell and Adam Booth informed us that their work would be for Socialist Appeal. As you are probably aware, Labour’s NEC recently proscribed Socialist Appeal as a political organisation that does not share Labour’s aims and values.

“We are fully committed to supporting press freedom and we have accredited more than 1,200 UK and international staff and freelance journalists for this year’s conference, including some who work for politically aligned outlets. But we do not feel obligated to provide media passes for people working on behalf of a proscribed political group.”

In other words, everyone under the sun – including the Sun (!!) – is allowed in, and by implication is considered to share Labour’s ‘aims and values’. Socialist Appeal, meanwhile, the paper Starmer wants banned, is explicitly censored.

“I am truly shocked at how our branch members have been treated. Journalists do not cover conferences to help out the party leadership or act as glorified PR officials. They are there to work for their newspaper or media outlet, and to provide quality copy for the benefit of their readers.

“What’s next? Political vetting of reporters? Loyalty tests? Journalists must be able to work free from hindrance.

“Socialist Appeal is a legitimate labour movement newspaper, and to have NUJ members who work for it targeted like this  – presumably in furtherance of some internal party conflict – is shameful and does the party no credit, in my opinion.

“Freedom of the press must be defended.” This political victimisation is a clear attack on journalistic freedoms: vetting reporters; excluding those who are considered not acceptable by the bureaucracy; and turning the press into PR agents for the party.

And above all, it is a direct attack on Socialist Appeal and the ideas of Marxism: ideas that have far more of a tradition – and far greater legitimacy – in the labour movement than the pro-capitalist interests that Starmer and the right wing represent.

We therefore urge all our supporters to mobilise against this suppression of press freedoms, and to rally in defence of Socialist Appeal journalists, by raising this issue in CLPs and trade union branches; and by bombarding the Labour bureaucracy with letters of complaint, written to the party’s press team (This email address is being protected from spambots. You need JavaScript enabled to view it.).

Most importantly, support Socialist Appeal – the paper that the right wing doesn’t want you to read – by subscribing today; and donate to our crowdfunder, to help us take the fight to the Labour right at this year’s showdown conference.