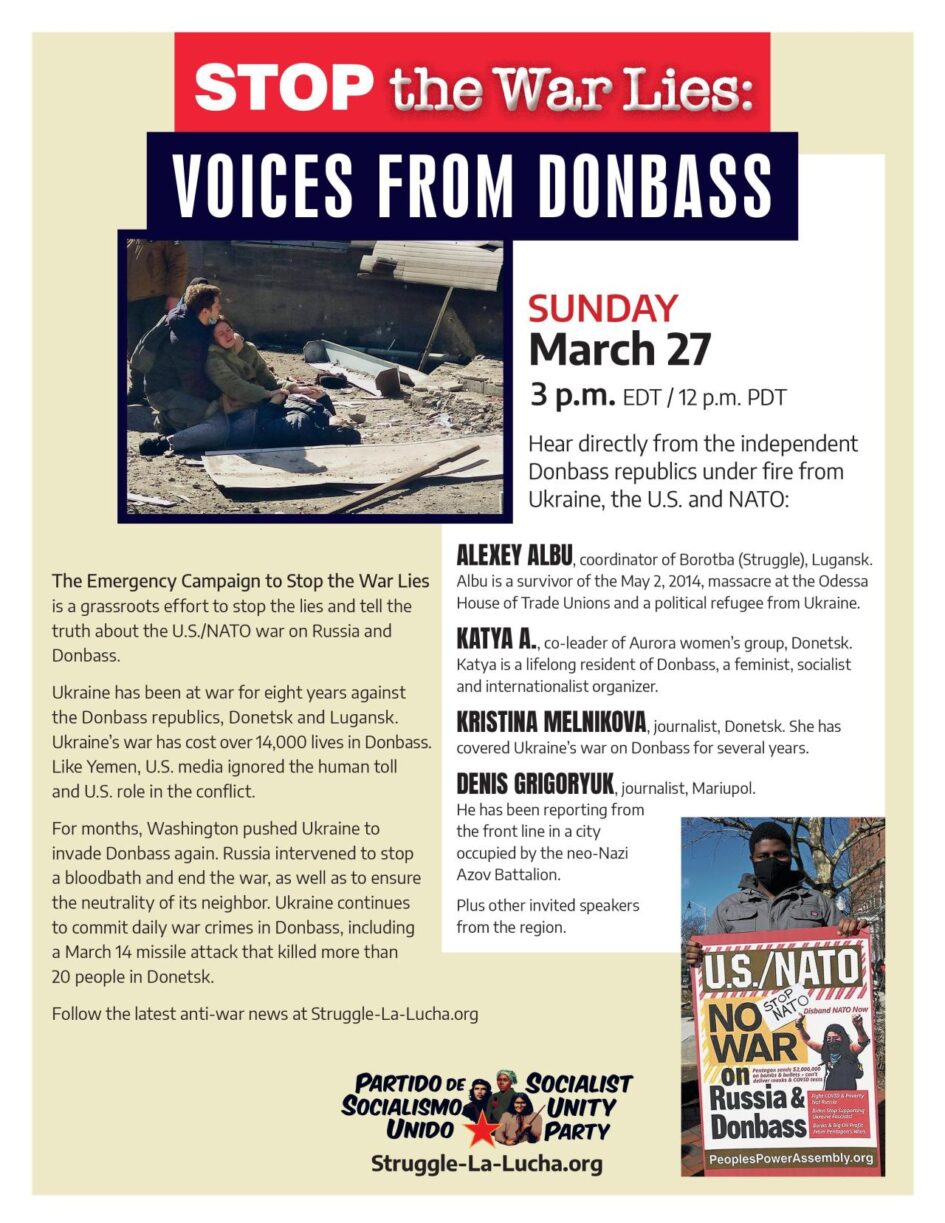 Hear directly from the independent Donbass republics under fire from Ukraine, the U.S. and NATO.

ALEXEY ALBU, coordinator of Borotba (Struggle), Lugansk. Albu is a survivor of the May 2, 2014, massacre at the Odessa House of Trade Unions and a political refugee from Ukraine.

KATYA A., co-leader of Aurora women’s group, Donetsk. Katya is a lifelong resident of Donbass, a feminist, socialist and internationalist organizer.

DENIS GRIGORYUK, journalist, Mariupol. He has been reporting from the front line in a city occupied by the neo-Nazi Azov Battalion.

Plus other invited speakers from the region.

The Emergency Campaign to Stop the War Lies is a grassroots effort to stop the lies and tell the truth about the U.S./NATO war on Russia and Donbass.

Ukraine has been at war for eight years against the Donbass republics, Donetsk and Lugansk. Ukraine’s war has cost over 14,000 lives in Donbass. Like Yemen, U.S. media ignored the human toll and U.S. role in the conflict.

For months, Washington pushed Ukraine to invade Donbass again. Russia intervened to stop a bloodbath and end the war, as well as to ensure the neutrality of its neighbor. Ukraine continues to commit daily war crimes in Donbass, including a March 14 missile attack that killed more than 20 people in Donetsk.

Webinar: Countering CounterinsurgencyFighting back against…

Webinar: The Importance of Solidarity with PalestineWednesday,…

China: From hunger and famine to feeding everyone (webinar)

Voices From the Inside Out: Monopolies hurt prisoners

Voices from the Inside Out: No aid on the way out

Voices from the Inside Out: New prison policy violates the law

Voices From the Inside Out: Penn. prison abuses the mentally ill