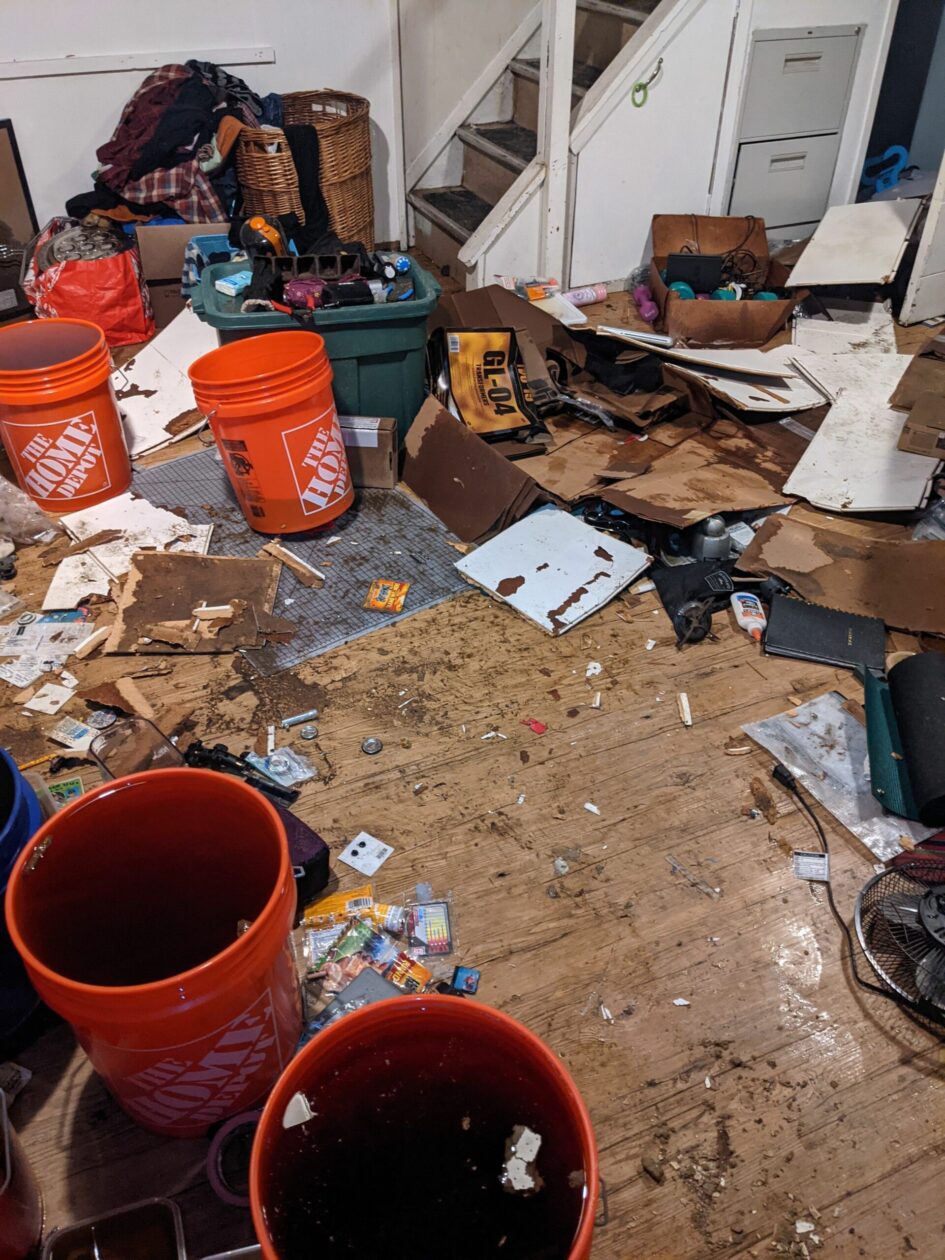 On Sept. 1, New York City was besieged by Hurricane Ida. Flash floods from torrential rains led to serious infrastructural damages, stranding numerous cars on roads and highways and flooding subway tunnels. With flood waters rising, many people were trapped in basements or in submerged areas.

Around 9 p.m. that night, I was watching TV with my loved ones in my Bronx home and eating a home-cooked meal, when it began to rain. At first, I was honestly grateful that I wouldn’t have to water the garden. Then the winds picked up and made the big neighborhood oak tree sway. My partners and I held hands and watched from our living room. Then, our ceiling started leaking. Buckets could not keep up with leaking. Photo: Quell

We put a bucket underneath and worried how much it would cost to fix. A dripping noise from upstairs let us know this wasn’t isolated; before long, the leaks were in every room, our walls looking like bubble wrap from the water gathering behind the paint. We emptied bucket after bucket, water pooling around our ankles, until we finally admitted defeat.

We couldn’t stay there any longer — even if we mopped up all the water and fixed the leaks magically, the water damage to the building structure would lead to hazardous levels of mold.

In tears, wracked with anxiety, my partners and I gathered our most treasured possessions and everything we’d need to keep on our person. We loaded into the car, panicked, and drove to a motel. Before I left, I saw the ceiling in my bedroom burst, drywall and water contaminating everything. Since then, I’ve bounced from hotel to hotel, to friends’ places, and home again to assess the damage. As I write this, I’m lucky that a friend has offered his spare room for a few days. But it could be weeks, maybe months, before repairs make my home livable again. What’s more, it’s doubtful that insurance will cover all the damages, leaving me with thousands of dollars of out-of-pocket costs.

I know I’m relatively lucky — I have job security and a large network of friends and comrades to help me. I know there are people who have suffered even worse, who have lost literally everything; some will be left without anywhere to return to.

At least 18 have been confirmed dead in NYC alone. This is not an experience that exists in isolation — Hurricane Ida, and the even deadlier storms that will no doubt follow, will affect all working and oppressed peoples.

It is clear that no one was prepared for this catastrophe; from emergency alert systems to city infrastructure, there were no mechanisms or systems in place to truly handle this event. Despite claims from government officials, however, this is not because Ida was unpredictably dangerous; rather, it highlights the abject failure of the capitalist system to preserve human life.

As difficult as this has been for me personally, as painful and traumatic, I find myself filled with another emotion — anger. I’m angry at the corporations and bourgeois scum who have ravaged our planet for profit. I’m angry at the systems that push marginalized people, especially Black people, into living in locations prone to flooding and natural disasters.

I am angry that profit is valued over human life, that individuals are left to fend for themselves, forced to pay untold dollars they may not even have. I’m angry that the government, regardless of party affiliation or the person in the White House, doesn’t truly care about working people. In short, I’m angry at capitalism.

The brunt of the ongoing climate disaster will be borne by working and oppressed people. The capitalists sit in their yachts and towers, retreating to their compounds and bunkers when the crisis begins to affect them as well.

If we want to avoid death by burning heat, by floods, by tornadoes, crop failures and all the other horrors that the climate crisis brings, we’ve got to organize. We’ve got to take back our power as workers. It’s workers who grow the food, run the factories, build every building and dig every ditch. It’s workers who make the world run, and it’s high time that workers ran the world!

Whatever happens to me, whatever tragedy befalls me, I will never shirk my responsibility to fight for the liberation of all the relations of life on this planet. Chairman Fred Hampton of the Black Panther Party said, “Peace to you — if you’re willing to fight for it.”

Capitalism vs. the Planet