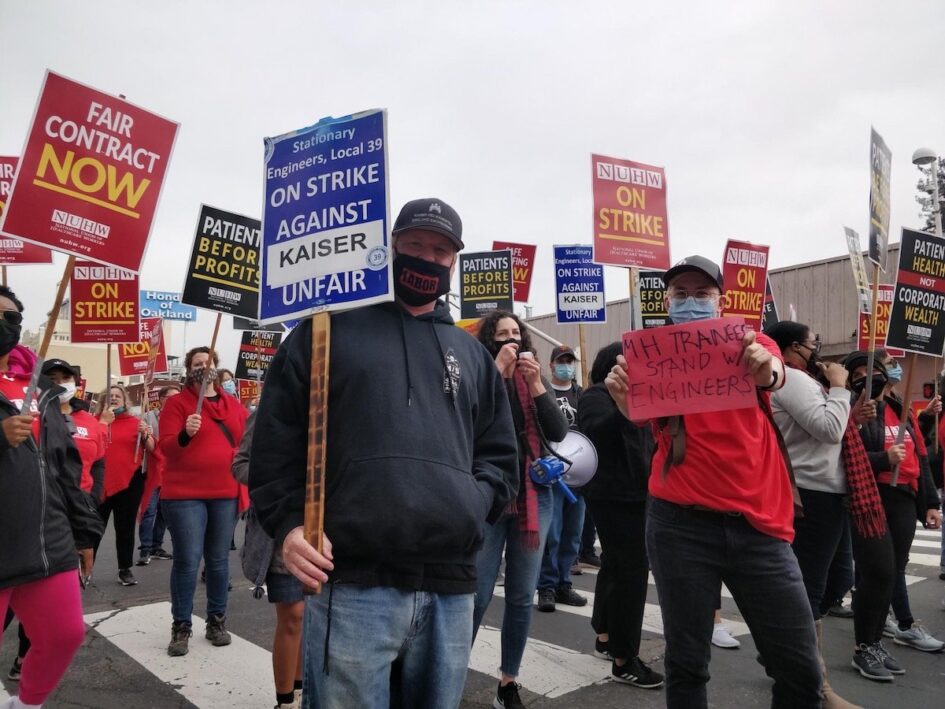 In breathtaking solidarity, 40,000 Kaiser Permanente healthcare workers representing SEIU-United Healthcare Workers West joined the picket of the International Union of Operating Engineers Stationary Engineers, Local 39 in a one-day sympathy strike on Nov 18. The next day, more than 20,000 Kaiser Permanente healthcare workers in the California Nurses Association and the National Union of Healthcare Workers across the state also joined in a one-day sympathy strike.

Approximately 700 Local 39 engineers throughout Northern California have been on strike fighting for a fair contract since September 18.

On Nov. 18, a large crowd of SEIU workers and supporters held high-spirited rallies, chanting throughout the day at the San Francisco Kaiser Hospital at 2425 Geary Blvd, joining Local 39 engineers for their 62nd day on the picket line. The day before, Kaiser had briefly met the bargaining team for a short period, only to fail to negotiate the three-year incremental wage increase that would put the engineers 50 cents an hour below other engineers in Northern California. Local 39 engineers rejected a “substandard wage increase, expanded work responsibilities and changes to [their] seniority” and have continued to strike until Kaiser comes to the table with meaningful movement, particularly on the pay scale the engineers desperately need. They are behind their counterparts in the industry and face the ever-increasing cost of living in the Bay Area.

Jay Vega, a district representative for Local 39 told Liberation, “Yesterday [Kaiser] did come to the table only for a very short time, only to send the wrong message so that maybe some of these guys would show up to work today, that’s what it felt like to me. That was just to discourage the SEIU from coming out today.”

However, the bargaining failure and miscommunications did not discourage SEIU-UHW and other workers from coming out in solidarity with the engineers on the line.

Speaking to Liberation, Local 39 member and strike captain Pablo Ramirez, who has worked for 16 years as an engineer, said, “It has been a life changing experience to be out here 62 days on the strike line. We’ve experienced a lot of support from unexpected sources. Other unions and people that weren’t even aware of us have come out here and spent time with us. People have shown up with bands, with lunches, with food, drinks, ice, all kinds of supplies, just random acts of kindness … And to have people come through out of the goodness of their heart is really humbling and really uniting.”

Ramirez continued to explain how much his participation in the union’s strike against Kaiser changed his perspective on what it means to struggle with others to fight for what’s right. “I’ll never, ever feel the same about Cesar Chavez day… You know, we’ve been out here for 62 days, and that’s nothing in comparison to the union members who have been out through police brutality, through employer intimidation, through violence, through murders, through all kinds of struggles to fight for what they believe in. I was never 100% a union type of person, but when it affects you, you’ll never forget it. I’m one sentence in a page in a chapter of the American labor movement.”

The San Francisco Labor Council also called on various unions to join SEIU-UHW and Local 39 on the picket line: “We want to make these Solidarity Actions as large and loud as possible to send Kaiser a strong message that all of Labor stands with Local 39… Let’s demand Kaiser treat its workers well.”

At the picket line on Thursday, workers from Sign Display Local 510, the Labor Council for Latin American Advancement, and more could be found joining the Kaiser picket in solidarity.

Outside of the hospital, Olga Miranda from SEIU Local 87 said, “Workers are angry and frustrated that in a pandemic, the wealthy 1% made far more than any worker can provide for their own. I admire Local 39, and we will stand with Local 39 until they get a victory in their contract.”

On the morning of Nov. 19, after a lively rally at the picket line in front of the Kaiser hospital in Oakland, California, hundreds of healthcare workers and supporters marched to the Kaiser Permanente National Headquarters in downtown Oakland to bring their demands straight to the corporate bosses.

Mental health providers with NUHW who joined the strike are involved in their own struggle against Kaiser: for over two years the union has been fighting to improve funding and staffing for Kaiser’s mental health services, which currently cause mental health patients to wait weeks or months to be seen. Chants of “Patient health over corporate wealth” directly pointed to the common root cause of all the unions’ grievances with Kaiser – the drive for profit at the expense of workers.

According to a press release from the California Nurses Association announcing the solidarity strike:

“Kaiser Permanente has made $13 billion in profits. However, rather than spend that money on increasing core staffing, Kaiser has proposed to float engineers among facilities. This model would institutionalize the staffing shortages that have already hurt patients and workers.”

On the picket line outside of the Kaiser HQ in Oakland, Samuel Bahta, a nurse who works at Kaiser in neighboring San Leandro and is a member of NUHW, spoke to Liberation, “I want safe care for our patients. To provide safe care, we need enough staff. Kaiser should prioritize staffing because it’s related to patient safety. We’re out here to say Kaiser should prioritize people over their profit margins.”

Another nurse who is a  CNA member told Liberation, “I’m sure [Kaiser] could afford to do more than they say… I don’t think anybody is trying to get rich, we’re basically just trying to hold onto what we have, and when we retire, we want to be able to have the retirement that we planned to have when we went into these fields. I don’t think anybody wants to gouge Kaiser for anything. They should take care of the people who are taking care of the people.”

In the rain on the picket line, Kevin Shomo, a community member and retiree who formerly belonged to AFSCME and CWA, extolled the benefits of his union membership, “I don’t have to worry about medical when I go to the hospital. I pay $10 for the doctor. That’s what we have to fight for! But if we don’t fight for it, we’re not going to get it! And when you have it, they’re gonna try to take it! “In this capitalist system, the wealthiest country in the history of mankind, and you can’t afford people’s healthcare? I mean, it’s appalling.”

The same afternoon at the Kaiser in Oakland, local acapella group, Occupella, sang folk songs in the spirit of solidarity with working struggles such as “Which side are you on?” by Florence Reece, “Solidarity Forever” by Ralph Chaplin, and “De Colores” a Mexican folk song.

Bill Balderston, a retiree and former teacher who continues to organize with the Oakland Education Association, had also been joining the Local 39 engineers for the past couple of days. Speaking to Liberation, Balderston said, “The engineers have been hanging on their own for quite a while, I think it’s long overdue that we’ve had this kind of action and mobilization in support.”

Situating the recent Kaiser worker organizing efforts in the context of the recent strikes across the nation, Balderston added, “This is part of a larger trend right now that’s emboldening a lot of people. Even though there’s been some settlements, I think people are getting a greater sense of power.”

You can support the Local 39 Stationary Engineers and Biomedical Technicians by joining the picket line at a Kaiser hospital in northern California and donating to their strike support fund here.

35,000 Kaiser Permanente workers are set to strike, and the future of US healthcare is at stake

It is time for a community approach to mental health