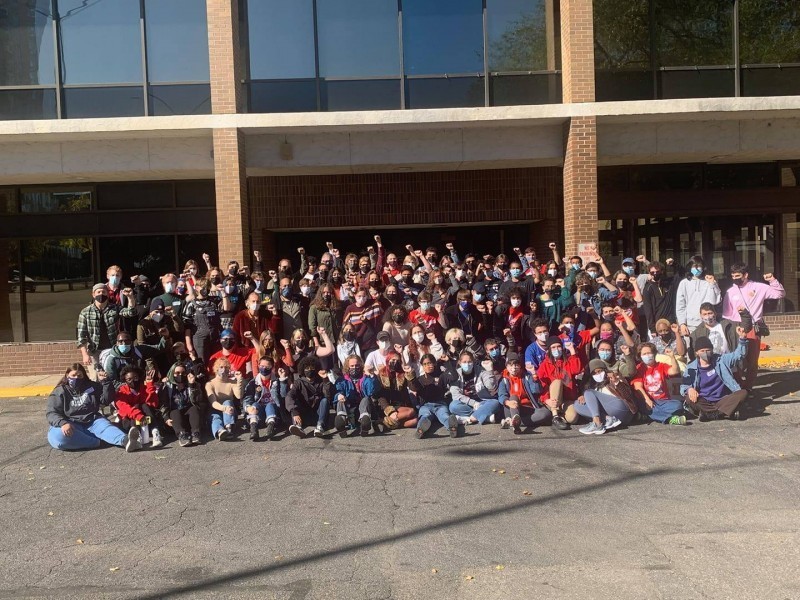 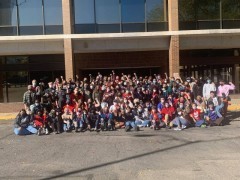 Minneapolis, MN – On the weekend of Oct. 16-17, almost 170 students convened at the University of Minnesota for the 15th National Convention of National Students for a Democratic Society. It was the first time SDS organizers had gathered together physically since the start of the COVID-19 pandemic.

Last year, SDS hosted a series of national webinars, but this experience was vastly different. Student organizers gathered together to discuss the four crises of the last two years – pandemic, economic crisis, police killings, and environmental disasters. Another theme was “From George Floyd to Winston Smith, The Uprising Continues!”

On a cold Saturday morning, by a building overlooking the Mississippi River, students waited outside for a novel convention experience: to present their vaccination cards, proof of a negative test, and, for out-of-towners, to be tested for COVID-19. It took longer than the program indicated, but went well and the attendees’ enthusiasm were palpable. Masked up, the students were free to commence.

The speakers and workshop presenters had a mighty task ahead of them: to do justice to the momentous uprisings of 2020. But they succeeded. They took the grief of the over 720,000 lives lost in the last few years and transformed it into anger and a determination to resist. They gave rousing presentations that had students thumping on tables, clapping and whooping. The halls rang with chants of, “No justice, no peace! No racist police!” and “Dare to struggle, dare to win!”

Speakers told riveting stories of the Minneapolis uprising for Justice for George Floyd, the burning of the Third Precinct, and drummed up support for victims of police crimes across the country. They spoke up against the increase in police and state repression of protesters as a result.

“We’re currently trying to organize people to fight all of the charges and get all of them dropped because the city can’t continue to talk a big talk about how they admire civil rights activists and how much they are inspired by community organizing and then turn to such brutal tactics of state repression,” said Jae Yates, a guest speaker from the Twin Cities Coalition for Justice for Jamar Clark organizer, commenting on the arrest of over 646 protesters in November 2020 who marched in Minneapolis against police crimes.

Students shared their own experiences of taking these fights against police to their own campuses, in student campaigns to defund, disband, or gain outright control over university police. At least one campus SDS chapter has been formally suspended by their administration as a result.

Attendees also heard from SDS leaders about the effects of the economic crisis, the mass layoffs and unemployment. They talked of student demonstrations that stopped budget cuts, new campaigns for living wages for campus workers. They spoke of the big picture importance of solidarity between workers and students and applauded strikes such as the ongoing United Auto Workers’ strike at John Deere, and the successful Nabisco strike.

“Each of these anecdotes indicate that improved working economic conditions must be tirelessly fought for—even on college campuses,” said Terrence Freeman of Appleton, Wisconsin Students for a Democratic Society at Lawrence University.

Freeman continued, “Victories are won through direct action, not armchair activism. The enemy, the academic establishment, will stubbornly defend their interests. Universities are businesses run by individuals who seek to extract as much profits from their employees as possible. Thus, administrators will concede nothing unless we demand them to do so–unless we organize and create crises that they cannot simply ‘shut down’ or subdue. These people will not willingly increase our pay. They will do nothing that reduces their profit margins. The world rests upon the labor of the worker, not the idleness of the boss. It is time for folks to recognize this fact.”

Students renewed their commitment to oppose U.S. intervention against Venezuela, Syria, Palestine, Afghanistan and more places. Moreover, students heard a full panel of speakers who talked about climate change, climate justice, and the fight to stop oil pipeline Line 3, which does not belong on Ojibwe land.

“Go Fossil Free reports that nearly $15 trillion has been divested from the fossil fuel industry and over 200 academic institutions have been a part of this work which has become a central component of the student movement in the last decade. The University of Minnesota announced its own commitment to fossil fuel divestment. This was won after a decade of organizing on this campus and alongside organizers for this movement all over the world. We are not responsible for this planet’s destruction but we are inheriting its impacts. And we will follow indigenous leadership and stand for these lands to be returned to their original peoples because we demand a livable future,” said Emma Hjelle of the University of Minnesota Students for Climate Justice.

On Sunday, students passed resolutions and made several calls for action to carry through the new school year, from Fall 2021 to Summer 2022. They resolved to continue the fight to get cops off campus and form coalitions to try to gain control of campus police departments.

Ellis Howard from Texas A&M University Students for a Democratic Society said, “The national SDS convention really gave us a lot of ideas for organizing in our community. For example, we are looking to talk more about Community Police Accountability Councils (CPAC) as we carry out our campaign for racial and ethnic justice on campus. We would have never had the opportunity to learn about it with such nuance without our attendance at the convention.”

In further resolutions, SDSers stated they would say no to attacks on abortion rights from state to state. They resolved to fight racism on campus, respond to racist attacks and hate crimes, and fight for higher enrollment of Black and Chicano students. They declared support for labor and striking workers and their own campus unions. They resolved to continue to oppose U.S. wars. They announced that they would continue to fight for protections for LGBTQ+ students.

“This convention I learned about how to stay militant in the next year and have plans to take ideas back to my local SDS chapter and make our current campaign to defund USFPD even better and more militant,” said Taylor Cook from the Tampa Bay Students for a Democratic Society.

Cook continued, “I was amazed by people’s struggles across the country. I loved to hear the ways we as students and organizers in general are fighting back on all fronts, despite the difficult conditions that resulted from the U.S. government’s mishandling of the pandemic. This next year will be more militant than ever. Across the country we will land blows to our university administrations, and we will make our campuses a progressive and safe space for all students and people from oppressed communities.”