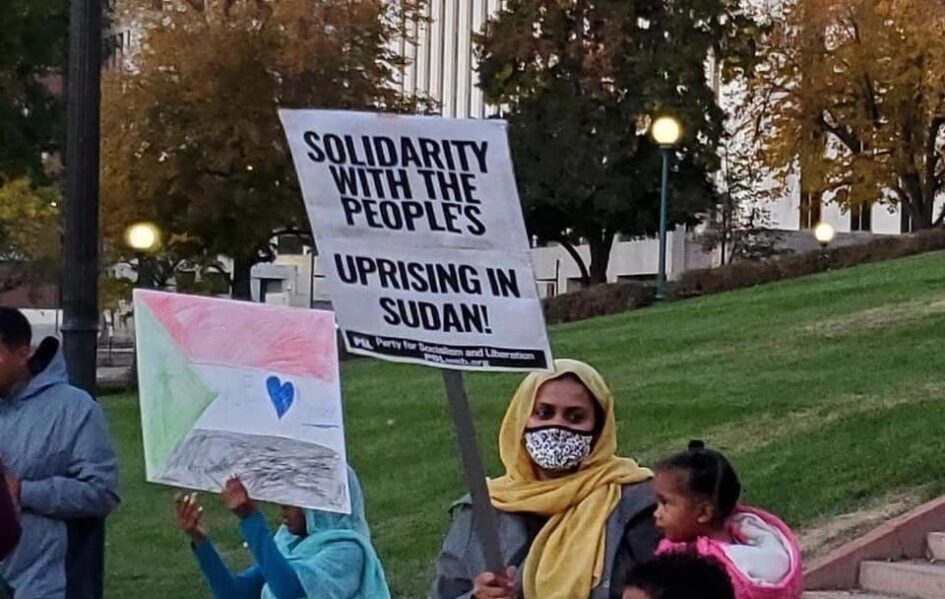 Hundreds of thousands of people in Sudan are in the streets courageously resisting the coup staged by the military on Monday. The country’s top armed forces leader Lt. Gen. Abdel Fattah al-Burhan announced the take over and declared a state of emergency. As part of the coup, soldiers arrested Prime Minister Abdalla Hamdok and other high ranking civilian officials, and it was revealed today that Hamdok was being held captive at al-Burhan’s personal residence.

This coup dissolved the 2-year old joint civilian-military Sovereign Council, which took over the country following a people’s revolution that began in December 2018 — referred to in the country as the December Revolution. That revolution, sparked by anti-worker austerity measures that led to spiraling food and fuel prices, deposed long-time military ruler Omar al-Bashir and forced the installation of a civilian cabinet led by Hamdok that was meant to lead the country until elections were held. But the institutional power of the military remained a force to be reckoned with, and the armed forces continually attempted to undermine the transition to a new, democratic form of government.

Huge numbers of supporters of the revolution are staging a general strike and a campaign of total civil disobedience. Barricades have been put up along main roads and in different sections of major cities to deny the military control. The resistance is determined to struggle despite severe repression from police and soldiers, who have fired live ammunition at civilians. Reports indicate that at least 10 people have been killed so far. But the true number may be far higher, as information from inside Sudan has been obstructed by an internet blackout imposed by the military.

A number of different political forces are participating in the resistance. The Sudanese Communist Party along with allied community organizations and neighborhood resistance committees called on the people to rise up. The SCP played a major role in the December Revolution. The party declined to participate in the joint military-civilian transitional government when it was established and is widely respected among revolutionaries in the streets.

A broad coalition called the Forces for Freedom and Change, encompassing political parties and mass organizations that played important roles in the December Revolution, has also issued a call to action. An organization called the Sudanese Professionals’ Association has likewise been a main sponsor of mass mobilizations. Officials in Hamdok’s government that managed to avoid arrest have spoken out in favor of the uprising and refused to recognize the legitimacy of the coup plotters.

Fears of a coup had been rising in recent weeks. This week’s military takeover comes less than a month after a failed coup attempt by other military officers. Earlier this month, al-Burhan called for the dissolution of the transitional council after engineering a split in the Forces for Freedom and Change using groups widely regarded as proxies for the military. This was answered by the ‘March of Millions’ last Thursday by protesters who demanded a full transfer of state power from the military to exclusively civilian authorities.

As people stay in the streets despite the army’s atrocities, it is evident that the people of Sudan will not back down from their fight for a more just society in the spirit of the December Revolution.