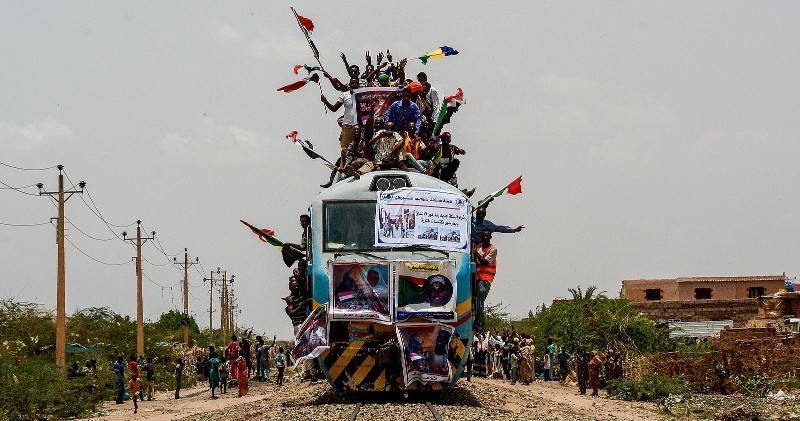 Part two of our exclusive interview with the Sudanese Communist Party

People’s Voice interviewed Elfadil Elhashmi, an activist in the Sudanese Communist Party, to discuss the ongoing struggle for democracy, secularism and progress in that country. The following is the second of that two-part interview, focusing on the role of imperialism and international solidarity.

People’s Voice: In the recent past, different parts of the African continent have been targeted by US and French imperialism especially. What role do imperialist forces play in the current situation in Sudan?

Elfadil Elhashmi: Imperialism has been affecting the current Sudan crisis in regard to both resource utilization and exploitation as well as its identity as a diverse and multicultural and multi-religious nation-state.

Historically speaking, the Turko-Egyptian colonial rule of Sudan heavily exploited its people (through the slave trade) and gold. It also heavily taxed the Sudanese people, leading to a merciless primitive accumulation as thousands of Sudanese left their farms and pastoral lives and became workers in the Turkish ammunitions and soap factories. Semi-feudalism and slavery coexisted with an emerging dependent capitalist mode of production. The mode of slavery included exporting slaves who were used as currency for exchange of products and working slaves in the gold mines, farms, as soldiers in the Sultanate’s army or as domestic servants.

The British-Egyptian colonial rule until 1956 heavily exploited and exported cotton and ivory raw materials to England. A huge economic surplus was transferred to England through foreign banks and foreign companies. For example, in the period 1947-1952, nine million sterling pounds were exported to England.

These imperialist systems devastated, underdeveloped and deprived the Sudanese socioeconomic system and created unequal development between the local centre and the periphery.

Second, the pretexts used by the imperialists (US, European Union, etc.) include spreading democracy, fighting terrorism and advocating international free trade wrapped up with the commercial illusion of the American dream. The markets of the drug trade, human trafficking and body organs were hidden from the commercial package. Meanwhile, the industrial-military complex of imperialism flourishes from the spread of wars and sales of weapons – as do the American companies that accompany the armies. The resulting dependency on imperialism is unequal development in dependent countries and plundering of resources using the following tools of domination: the World Bank, International Monetary Fund and the World Trade Organization; the US Agency for International Development (USAID); the North Atlantic Treaty Organization (NATO); the United States Africa Command (AFRICOM) whose mission is to respond to crises in order to advance US national interests in Africa and to promote regional security, stability and prosperity; and the African Union.

US imperialism never attempted to help in handing Omar al-Bashir over to the International Criminal Court. Instead, it uses this reality as a maneuvering and leverage tactic to get as much as it can from Sudan including its participation in the Saudi-Yemeni war by sending mercenary militia to fight Iran on behalf of US imperialism. In this context, the US economic sanctions and the promise for their removal are designed to slowly but surely force Sudan to accept the devastating economic, financial and debt service prescriptions of the IMF including the privatization of health and education and austerity measures of removing subsidies from basic commodities and lifesaving medicine.

PV: Can you give us some examples of the history of the inequities and injustices in the US relationship with Sudan?

EE: In 1988, the US imposed its first sanctions on Sudan due to the accumulation of debt arrears and lack of debt service. As we speak, the IMF and other imperialist institutions are giving Sudan a hard time by not bestowing debt relief to keep it on [a] short leash. This way they will shorten the life of democracy and encourage generals to rule again.

Altogether, over the period 1956-1979, the US offered aid of only $138 million dollars to Sudan, but it provided $271 billion during 1980-1985 under the dictatorship of Jaafar Nimeiry. Most of this was humanitarian aid rather than economic development.

The imperialist economic sanctions imposed on the previous dictatorial regime of Bashir negatively affected the transportation sector (airlines and railways) which heavily depended on American spare parts. They also negatively affected health, education, agriculture, industry and the technology sectors as well as the banking and financial transfers. All of this heavily affected the living standards of the people.

US imperialism never supported the democracy fighters in Sudan. All the sanctions that were imposed like putting Sudan among states that deal with human trafficking (2003), issuing the Sudan Peace Law (2004) and the Darfur Peace Law (2006) never directly benefited the peace and democracy movement in Sudan. When the US heavily joined the Sudan peace talks, it stood against the unity of Sudan and supported the separation of South Sudan in the 2005 Comprehensive Peace Agreement.

US imperialism has never pursued a mutually beneficial relationship with Sudan and has been persistently designing it to be a dependent and a follower. Even when Obama issued a decree to abolish sanctions on the military regime of Omar al-Bashir in January 2017, he stipulated that Sudan has to commit to stopping illegal outmigration and support the Saudi war against Yemen.

PV: How has the conflict in the Tigray region in Ethiopia affected the people’s movement in Sudan?

EE: The conflict in the neighboring Tigray region along with other conflicts along the Eastern border with Ethiopia and Eritrea do affect the revolution and democratic change because more than 60 thousand people fled to Sudan in this Tigray war and there are fights and disputes along the Ethiopian–Sudanese border.

The Tigray front has strong ties to Sudan’s previous military regime of Sudan, and they hope to use them to destabilize political change in Sudan by involving the current ruling military generals in the transitional government. Egypt is also working closely with the Tigray front and maybe with Sudan to destabilize the Ethiopian regime so that the Grand Ethiopian Renaissance Dam (GERD) does not get completed. Violence and ethnic tensions are flaring up on the Sudan-Ethiopia border where troops have clashed in the disputed territory of Elfashaga.

The United Arab Emirates has an economic agenda in the region – especially buying ports as part of the ongoing port wars along the Red Sea and the Pacific Ocean and has supported Ethiopia militarily in the fight against Tigray. There is news that the UAE is putting forward an initiative whereby the agricultural territory will be divided 40 percent for Sudan, 40 percent for the Emirates and 20 percent for the Ethiopian farmers. A military and security land grab is underway whereby a huge area will make up an agricultural colony to be contracted for 90 years and completely run by the UAE and Israel. Details are yet to be confirmed.

PV: What is the role of international solidarity in supporting the struggle of the Sudanese people?

EE: Given the status of the temporary unjust imperial global distribution of power and wealth, Sudan has been subjected to decades of mineral exploitation and smuggling of oil and gold that rarely show up in the government budget. Land grabbing of fertile agricultural plots and areas rich of minerals for ninety years has been contracted under the defunct military fascist regime. The current transitional government does not seem to bother renegotiating such contracts. Big multinationals from Russia, China, Canada and Europe are involved in gold mining.

At the local and regional levels, the Sudanese military, the militia and parasitic Sudanese merchant capitalists developed an alliance with the Arab monarchies in the UAE, Saudi Arabia and Egypt. They have already sealed land contracted for years in huge agro-business projects in crops, oil seeds, animal stock and meat. The Janjaweed militia alone has forcefully occupied the big gold mine district of Jebel Aamir for years now and huge gold wealth up to 53 percent of total exports has been subjected to smuggling.

The grassroots Sudanese struggle is counting on international solidarity to stop this kleptocracy and plundering of resources by all imperialists including the international institutions of impoverishment: the World Bank, the IMF, the WTO and big business in the West as well as Russia and China.

A poem in solidarity with the Bolivarian Revolution