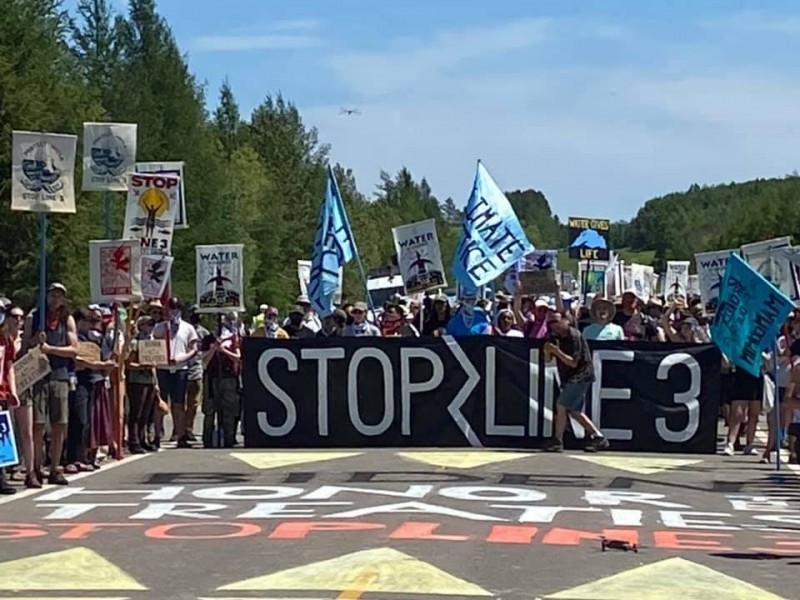 The Freedom Road Socialist Organization urges all progressive activists to take action to support the Ojibwe people in their fight against the Line 3 oil pipeline. Line 3, just like the Keystone XL and Dakota Access pipeline projects before it, tramples on the sovereign rights of the indigenous peoples whose traditional lands and waters it crosses – in this case the Ojibwe, who are part of the broader Anishinaabe peoples. In FRSO, we see the struggle against pipelines not just as an environmental issue but also one of the most important and militant struggles for indigenous sovereignty.

As outlined in our Immediate Demands for U.S. Colonies, Indigenous Peoples, and Oppressed Nationalities, FRSO supports full sovereignty for Native Americans and the right to national development, along with protection for traditions and cultures.

In the current period, struggles for indigenous sovereignty tend to revolve around treaties signed in the 18th and 19th centuries between tribal representatives and the United States. Line 3 is no exception: the pipeline would run through lands and waters that tribal governments retain many treaty rights over, even though they aren’t part of reservations. Limited U.S. recognition of these rights was won through protracted struggle by indigenous activists, especially the American Indian Movement’s militancy in the 1960s and 70s, and notably for the Ojibwe, the so-called “Walleye War” over off-reservation fishing rights. FRSO supports pushing for the fullest implementation of treaty rights as can be won.

However, we know liberation lies outside the limits of the current system. The national rights of indigenous peoples have been trampled on by genocidal U.S. policies. We uphold the right of indigenous national development, the return of land, revitalization of national languages, and a viable, common economic life instead of dependency. FRSO believes the fight to stop Line 3 embodies these national aspirations and helps build political power to make them real. The U.S. constitution’s provisions for indigenous sovereignty are subject to the whims of federal enforcement. By contrast, national development builds sovereignty as a fact on the ground that produces political power for indigenous peoples.

We also believe the fight against Line 3 is important for the multinational working class. It is a struggle against the common enemy of workers and oppressed peoples everywhere: imperialism, the highest stage of capitalism. We know liberation movements historically have produced major gains for the working masses. This is especially clear for fossil fuel pipelines, which drive ecological destruction and climate catastrophe, existential threats to workers of all nations. Line 3, like other new pipeline projects, is being built to transport tar sands oil, the dirtiest oil to extract, transport and refine. At a time when we need to fight climate change and ecological disaster, more pipelines encouraging oil extraction and oil use is reckless and irresponsible.

FRSO calls on oppressed nationalities, climate, labor, anti-war and anti-repression movements in all areas to support of indigenous resistance against Line 3.