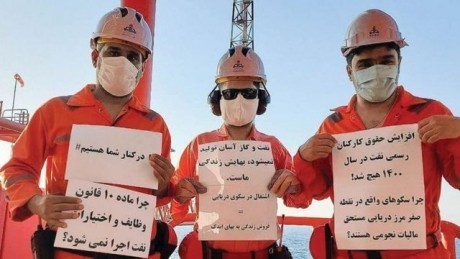 July 27, 2021 – From International Socialists
40 views
Iranian oil workers have been on strike for weeks and they need your solidarity. Please consider signing the petition below. Socialist.ca is gathering signatures which will be sent to: Council for Organising Protests by Oil Contract Workers. Sign the petition by emailing [email protected]

Oil and gas workers in Iran on one-day and other short-term contracts have been on strike for the last three weeks. They are demanding the reinstatement of sacked colleagues, full-time employment, better pay, more time off to see their families, improved living conditions and an end to the special economic zones and the system of subcontracting.

The strike was initiated by workers who are employed by subcontracting companies operating as intermediaries between privatised or state-owned oil and gas companies, on the one hand, and the workforce, on the other. Currently tens of thousands of workers at 114 refineries – including Jahan Pars, Gachsaran Petrochemicals, Tehran Refinery and Abadan Refinery – are on strike. A number of companies have been forced to stop operations.

As the workers point out, faced with the spiralling cost of living, they cannot support their families with their meagre earnings. The work is hazardous. The living conditions are appalling. Many of them work in southern Iran, where the summer temperature reaches almost 50 degrees centigrade. Workers are accommodated in dormitories.

There is widespread support from other workers in Iran. We call on full-time employees of the National Iranian Oil Company to join the strike if the demands of the short-term contract workers are not met.

No to imperialist war! No to sanctions!

No to Iran’s Islamic Republic!

A short history of oil workers struggles in Iran

The oil industry in Iran has been the driving force of production in Iran for a century. The workers of this industry have been the most productive and industrial force of Iran for decades. Due to the quantity of labour, they have always affected the Iranian economy. Moreover, their efforts in the industrial sector and being the leading and knowledgeable industrial force of the working class have inspired other industries in Iran. The protest of 9,000 oil industry workers in Iran during the suffocating period of Reza Shah was one of the first nationwide labour strikes in Iran.  Although these strikes resulted in the dismissal of 5,000 workers and long-term imprisonment for more than 200 workers, in fact, it taught the workers that with public solidarity, they could have a significant impact on society. In the long run,  the workers of other production units were inspired by it, and the strike of the workers of the Abadan refinery took place precisely a few months after the severe repression of Reza Shah. This time 14,000 people went on strike and demanded the release of all union prisoners.

The labour law was passed in Iran 17 years after the strikes (1946), and the workers made their demands not based on work but based on their demands, and of course, some of it was successful.

At that time, demands were made to give workers enough wages to provide them with at least a livelihood. As part of their demands, workers asked for one month of paid leave per year, abolishing all fines, housing for the married and single workers, and purified drinking water to be available to all workers.  They also demanded the elimination of unjustified dismissal of workers at the behest of the British companies, abolition of permanent dismissal and blacklisting, improvement of the condition of the company’s hospital, and the treatment of the workers at the company’s expense. Abolish of beatings, abuse, and disrespect for workers, and recognition of the freedom and legal rights of the trade unions were also part of these demands. Furthermore, reducing the daily work hours, from eight to seven hours, in the summer was also on this list.

Oil industry workers again staged protests to achieve their demands and improve the living standards of workers. The most extensive and most successful of which was after the fall of Reza Shah in July 1346. They protested the considerable difference in wages and benefits that foreign workers received. Thus, the Abadan refinery workers carried out the largest strike with the support of the Tudeh Party. The same strikes significantly improved the situation of the workers, and after that, the oil company put several plans on the agenda for housing and accommodation of the workers.

Throughout the decades, workers in the oil industry pioneered the promotion of workers’ rights. For example, in 1978, strikes began at the Ahwaz refinery, and they went on strike in protest of their living conditions; eventually, the strikes ended in February of 1979.

After the Iranian revolution in 1978, oil industry workers went on strike in several different periods, and the government of the Islamic Republic severely repressed them each time.

From 2001 onwards, the Islamic Republic found a new way to suppress workers without bloodshed. This time, their weapon of choice was “privatization.” Companies and affiliated industrial units in the oil industry were gradually taken out of government ownership and handed over to the private sector. The most important effect of these divestitures on the Iranian labour movement was that it reduced them to disorganized smaller groups, each subsidiary of a private company. In this way, the working-class population, which could have been at least 10,000 people in a strike, was divided into 1,000 to 500 people who had no organic connection with each other.

From the time of Mahmoud Ahmadinejad, and with the development of oil industry transfers, labour groups became even smaller and more disorganized and became much smaller in populations, each subdivided into a private company. More importantly, the government no longer met their demands, and they had to pursue their claims through private companies. Under these circumstances, the possibility of workers striking and protesting became impossible because small groups did not have much power against the enormous power and the influence of the private employers, and they would get fired with the slightest protest. According to the Ministry of Labor’s official statistics, during the three years, from 2017 to 2020 alone, more than 500,000 labour complaints have been registered for wrongful dismissal in Iran, most of which were related to large oil and petrochemical industries.

Since the beginning of the 2011s, with the further expansion of privatization, economic corruption has grown sharply on the one hand, and trade unionism was greatly overshadowed on the other.  Corruption trials in Iran also show that the largest embezzlement, both in quantity and number of occurrences, money laundering, thefts and misappropriation of public interests have occurred in the oil and petrochemical sector, and Iran’s most notorious economic convicts belong to these industries.  Under such circumstances, when the livelihoods of the oil and petrochemical workers reached the worst possible state, in an unpredictable move, all temporary and contract workers in the private oil industry joined hands, despite all government repressions, and went on nationwide strikes.