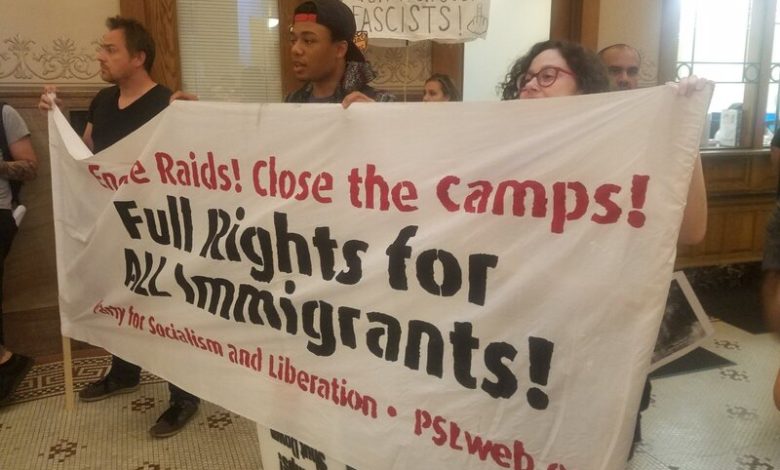 A Supreme Court ruling yesterday — upholding an earlier ruling by a right wing judge — dealt a blow to immigrants’ rights by requiring the Biden administration to re-adopt a racist Trump era immigration policy. Known as the “Remain in Mexico” policy, this measure prohibits people who arrive at the southern border from entering the United States while their cases are processed.

This policy is designed to inflict harm on immigrants and refugees. Many of the people coming to the U.S. border are fleeing extreme violence in their home countries, and when refugees come to the U.S. border they are met with even more violence. Much of northern Mexico is dominated by criminal gangs linked to the drug trade — a state of affairs fueled by U.S.-promoted neo-liberal economic policies and massive demand in the U.S. market. Mexico’s drug war has claimed over 300,000 dead since 2006, making it one of the most deadly ongoing conflicts in the world.

If people die on the route to the U.S. border or while waiting for their asylum claim to be processed, then the U.S. government hopes this will dissuade others from attempting to make that difficult journey. Death and traumatization of refugees occurs by design under this grotesque policy.

In addition to being immoral, the “Remain in Mexico” policy is also illegal under international law. According to the 1969 Cartagena Protocol, refugees are “persons who have fled their country because their lives, safety or freedom have been threatened by generalized violence, foreign aggression, internal conflicts, massive violation of human or other circumstances which have seriously disturbed public order.” By this definition, the people fleeing the Northern Triangle of Central America — composed of the countries of El Salvador, Honduras, and Guatemala — are certainly refugees and accorded all of the rights due to refugees in the 1951 Convention Relating to the Status of Refugees. The 1951 Convention is clear in  its prohibition against punishment of refugees for entering a country under any circumstances.

A notable element in the recent Supreme Court decision is the interference of the judiciary in foreign affairs. By upholding a lower court order to instate the “Return to Mexico” policy, the Supreme Court is taking the position that the Biden administration would be in violation of the law if it didn’t renegotiate its border policy with the Mexican government. It is exceptionally rare for judges to make rulings with such serious consequences for relations between neighboring countries. This episode is another example of how far right the Supreme Court has become.

Currently, the Biden administration is implementing a policy even more restrictive than “Remain in Mexico” referred to as Title 42. Title 42 was also implemented by the Trump administration, ostensibly as a temporary public health measure, and effectively prohibits essentially anyone encountered along the U.S.-Mexico border from entering the country. But the current court ruling appears to be an attempt to lock in a brutal anti-immigrant border policy even after the pandemic is over.

Fleeing the consequences of U.S. imperialism

The Northern Triangle of Central America accounts for the largest increase in immigrants to the United States in recent years. In the 1980s the U.S. government coordinated with right wing death squads and dictators to fight against socialist movements throughout the region. Honduras became known as a hotbed of drug trafficking used to finance the counter-revolutionary Contra terrorists in Nicaragua, and as recently as 2009 suffered a U.S.-backed military coup.

Brutal U.S. intervention in the region has created profound social collapse. El Salvador is the country with the highest murder rate in the world, Honduras is the fifth highest, and Guatemala is number 18. Seven years of drought has caused farmers to abandon their lands and flee for cities or to other countries. Central American governments, besides Nicaragua, have done little to offer support for the uprooted farmers. Climate change, deep poverty, the drug trade, and violence are pushing people to leave their homes and seek refuge in the United States.

Over 700,000 people left the Northern Triangle in 2019. This wave of immigration is due to the actions of U.S. imperialism, and yet the U.S. government is now being instructed by unelected judges to inflict even more harm.