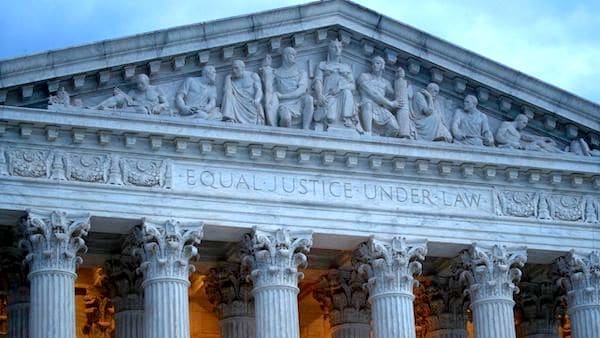 Wednesday’s oral arguments on abortion before the Supreme Court showed how close the court is to rescinding this fundamental democratic right, with colossal political consequences.

Two generations of Americans have no experience of the world before Roe v. Wade, during which obtaining an abortion was a surreptitious, often criminalized process, sometimes ending in physical mutilation and even death, and the right of women to make such decisions was subordinated to the reactionary ministrations of police, priests and politicians. They will react with justified fury to this attempt to turn back the clock.

The hearing underscored the role of a clerical-reactionary faction in the U.S. ruling elite, closely allied to the fascistic forces headed by ex-President Donald Trump. The prominence of right-wing Catholics on the high court—Samuel Alito, Clarence Thomas, Brett Kavanaugh, Amy Coney Barrett, and Chief Justice John Roberts—has particular significance on the issue of abortion, where they are imposing a religious dogma in flagrant violation of the separation of church and state.

These five justices, plus Trump appointee Neil Gorsuch, have clearly decided to uphold the Mississippi law banning abortion after a pregnancy reaches 15 weeks. The six justices asked few questions and seemed largely indifferent to the arguments being made. Their main concern was whether the case should be used for an immediate repeal of the landmark 1973 ruling, or whether to uphold the Mississippi law on narrower grounds, while not yet officially repealing Roe.

This would accomplish the same goal a bit more slowly, since it would abolish the standard set by Roe and the 1992 follow-up decision in Planned Parenthood vs. Casey, which upheld the right to abortion until the fetus is viable outside the womb, at approximately 23 weeks.

If fetal viability is no longer the standard, there is no judicial reason why the 15-week limit set by Mississippi could not be further lowered, to 12 weeks, eight weeks, or even six weeks, before most women even know they are pregnant. A six-week “limit” would be essentially the same as an outright ban.

Much of the hearing was given over to the three remaining moderate liberal members venting their concern that the court was discrediting itself in the eyes of the American people, who overwhelmingly support abortion rights. (Opinion polls on the eve of the hearing found huge majorities opposed to repealing Roe v. Wade, ranging up to 75 percent in an ABC/Washington Post  survey.)

Stephen Breyer, Elena Kagan and Sonia Sotomayor all warned that the court was taking unprecedented action in threatening a democratic right on which millions have relied for the past 50 years and doing so only because the composition of the court has changed, not because of any change in the nature of the issue or in public sentiment.

The sharpest criticism came from Sotomayor, who cited the statements of Mississippi state legislators, openly declaring that they had passed the 15-week law “because we have new justices.” She asked,

Will this institution survive the stench that this creates in the public perception that the Constitution and its reading are just political acts? I don’t see how it’s possible. 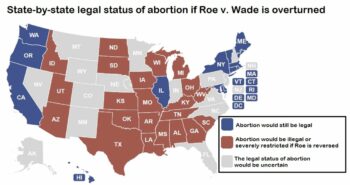 The composition of the court is itself a manifestation of the decay of American democracy, brought to the brink of collapse last January 6 when Trump attempted to overturn the 2020 election and maintain himself in power.

Trump himself appointed three of the six members of the ultra-right majority. The newest justice, Amy Coney Barrett, was installed only days before the election, while Trump was openly declaring he would not abide by the results and was counting on Barrett to adjudicate a challenge to the election of Biden in the Supreme Court.

Neil Gorsuch was named to a seat held open for nine months by Senate Republican leader Mitch McConnell, who insisted that Barack Obama did not have the right to fill a vacancy during a presidential election year—a precedent he cynically repudiated to push through Trump’s nomination of Amy Coney Barrett four years later.

The Democratic Party conducted no serious opposition to any of Trump’s nominations. They protested impotently over Gorsuch. They side-tracked the hearings for Brett Kavanaugh, Trump’s second nominee, into a #MeToo-style diversion, while avoiding any discussion of his right-wing views and his role in the impeachment conspiracy against Bill Clinton.

This process reached its nadir with Barrett, the law professor affiliated with a reactionary Catholic secret society, who replaced Ruth Bader Ginsburg. There was no basis in identity politics to oppose replacing a woman with another woman, and the Democrats were busy covering up Trump’s ongoing conspiracy to overturn the election, so they simply stood by as the court was moved sharply further to the right.

The Democrats have spent the past two decades accommodating and adapting to the right-wing attack on abortion rights. The New York Times— a quasi-official publication of the Democratic Party—marked the looming onslaught on the right to abortion by publishing and prominently featuring a rant by Ross Douthat, under the headline “The Case Against Abortion.”

The right to abortion is a class question. For all the handwringing of the Democrats, their social base in the upper middle class is not unduly exercised at the prospect of the repeal of Roe v. Wade. Women with money will still have access to abortion if they want it. They can easily travel to California or the Northeast, where it will still be legal, or even to Canada and Europe.

It is a far different question for working-class women in the South, the Midwest and other states where abortion would become severely restricted or outright illegal in the event of the repeal of Roe. Even now, lower-income women in those states have great difficulty in obtaining an abortion—in Mississippi, for example, there is only one clinic providing abortions in the entire state.

In Texas, the new state law authorizing vigilante civil lawsuits over any abortion provided after six weeks of pregnancy has virtually shut down access to abortion services in the second largest U.S. state, forcing women to drive hundreds of miles to Oklahoma, Louisiana or New Mexico, with the risk of losing their jobs because of the time off work and at great expense.

Figures presented to the Supreme Court in amicus briefs and during the oral argument document the hardship for working women. One in four women will seek an abortion in her lifetime, and of these, 75 percent are low income, 59 percent already have children, and 55 percent experience disruptive life events, such as losing a job or a partner, which are factors in their choice to end a pregnancy.

The far-right political forces being mobilized to destroy the right to abortion are the same forces that have played a leading role in demanding the ending of all restrictions on the COVID-19 pandemic and which came close to establishing a fascist dictatorship with the coup attempt of January 6.

The Democrats have capitulated to these political forces over and over: They have totally accepted the demands for the reopening of schools and abandonment of other pandemic restrictions, and they have sought to cover up the role of their Republican “colleagues” in the January 6 coup attempt.

The fight to defend abortion rights cannot be waged through the political parties representing any faction of the capitalist oligarchy or the affluent upper-middle class. As with all democratic rights, it requires the mobilization of the working class as an independent political force in opposition to the ruling class and the capitalist system.