The enthusiasm was palpable at this year’s autumn school organised by Der Funke, the Swiss section of the International Marxist Tendency. After nine interesting workshops, the school was closed by a standing ovation lasting several minutes and a huge fighting fund collection. The tremendous success of the school has shown how the revolutionary philosophy of Marxism and the conclusions that flow from it are more relevant and necessary than ever.

With 130 people present and almost 7,000 Swiss Francs donated, the German language Swiss Marxist Autumn School – Revolution2021 – held in Bern on 13 and 14 November, was a milestone for the building of the revolutionary forces in Switzerland and worldwide. For the first time in two years, we were able to hold an in-person event – the biggest in the history of the Swiss section of the International Marxist Tendency. Interesting talks and discussions in which comrades, sympathisers and guests participated made Revolution2021 an incredibly inspiring event. 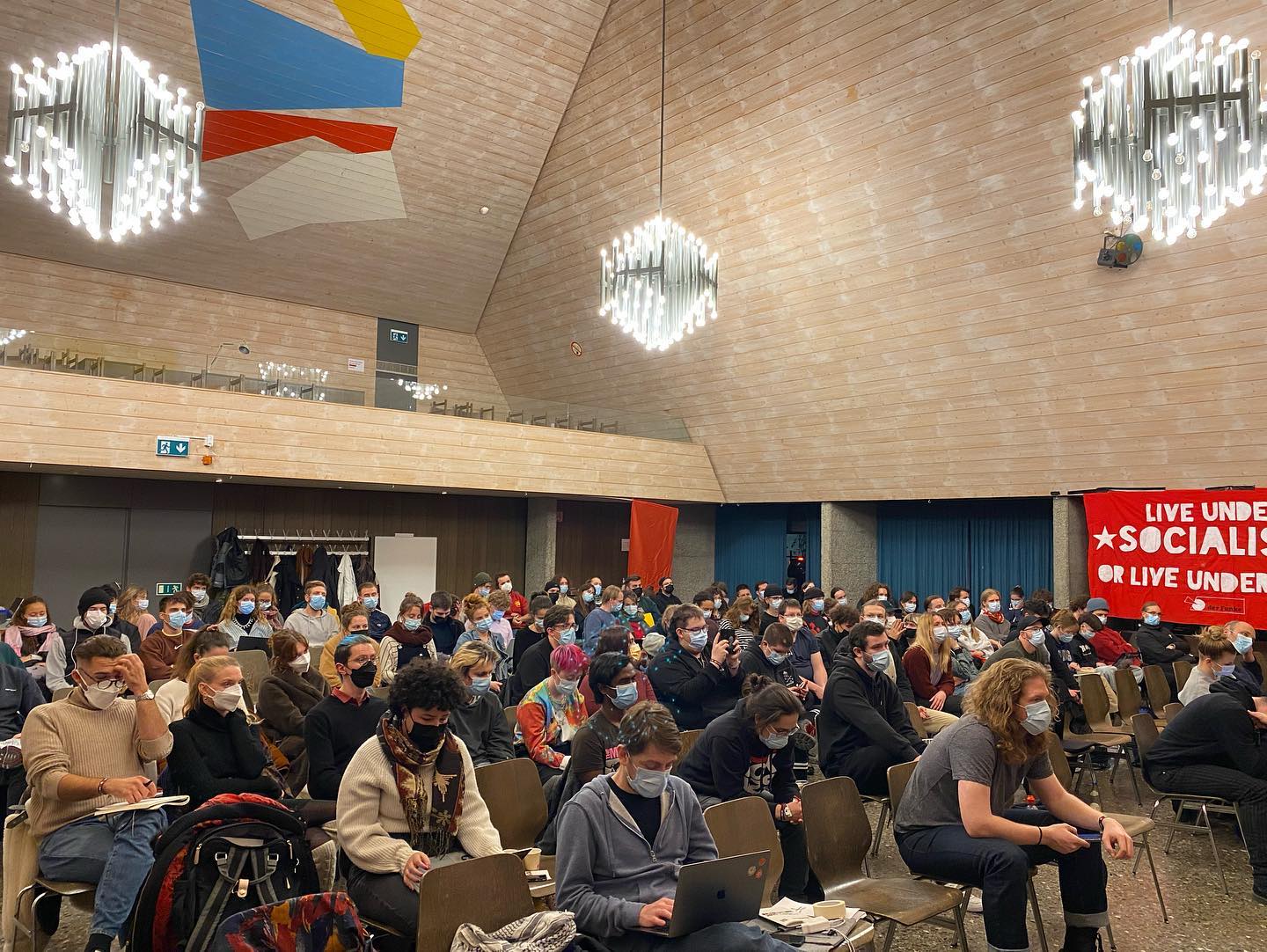 With 130 people present and almost 7,000 Swiss Francs donated Revolution2021 was a milestone for the building of the revolutionary forces in Switzerland / Image: Der Funke

The atrocious handling of the coronavirus crisis, the global economic crisis, the crumbling legitimacy of the pro-capitalist parties and politicians make a revolutionary organisation with a consistently revolutionary programme more necessary than ever. More and more young people are realising this and looking for revolutionary answers – and that is why they came to the biggest Marxist educational event of the year in Switzerland.

Many of those who registered said they had heard of the event on social media. The fact that so many people made the journey to Bern from all over Switzerland to learn about Marxism also proves the huge amount of interest. All in all, 130 people were present at the German-language school, which, when added to the attendance at the French-language school that took place three weeks ago, brought total participation to over 170.

Philosophy is the basis of revolutionary work

The fact that we were able to hold an event of this scale with safe conditions despite the raging pandemic was only possible thanks to the effort of numerous activists of Der Funke/l’étincelle (the Swiss section of the IMT). At a time when thousands of nurses are being overworked and sent unprotected into the next wave, when the Federal Council is ruthlessly defending the interests of the capitalists and when Swiss workers have been suffering the consequences of the economic crisis for almost two years, collective effort in a Marxist organisation is our most important asset. The task of Marxists is to give purposeful and militant expression to the anger and insecurity within the working class. For this we need clear ideas: the ideas of Marxism. As Lenin said, “without revolutionary theory there can be no revolutionary movement.”

This is why, in various workshops, we delved into Marxist philosophy. Only this understanding enables us to grasp the current situation in the context of wider historical developments. From the misery of the pandemic to energy chaos and food scarcity: all of the most urgent problems flowing from the anarchy of capitalism cry out for socialist economy planning, which is more necessary and more possible today than it has ever been before. Francesco of the International Marxist Tendency forcefully made this point in his talk on world perspectives. Despite the generalised chaos, we need to grasp the bigger picture if we are to work out a correct policy and build a revolutionary organisation.

A central point of Marxist philosophy is that progress is possible in human history. As discussed during the workshop on this topic, this is not a question of passing moral judgement on certain discoveries or developments in history. As Marxists, we define progress as the growing domination of nature by humanity. This notion is often criticised by postmodernists who argue that such advances as the steam engine or modern medicine have also had their negative consequences.

However, Marxists understand that progress is contradictory – progress in the context of class society has necessarily also led to the domination and exploitation of humans by other humans. This does not mean that there is no progress, but that we must abolish class society. Today, the future progress of humanity depends on the struggle to overthrow the capitalist system that impedes it. 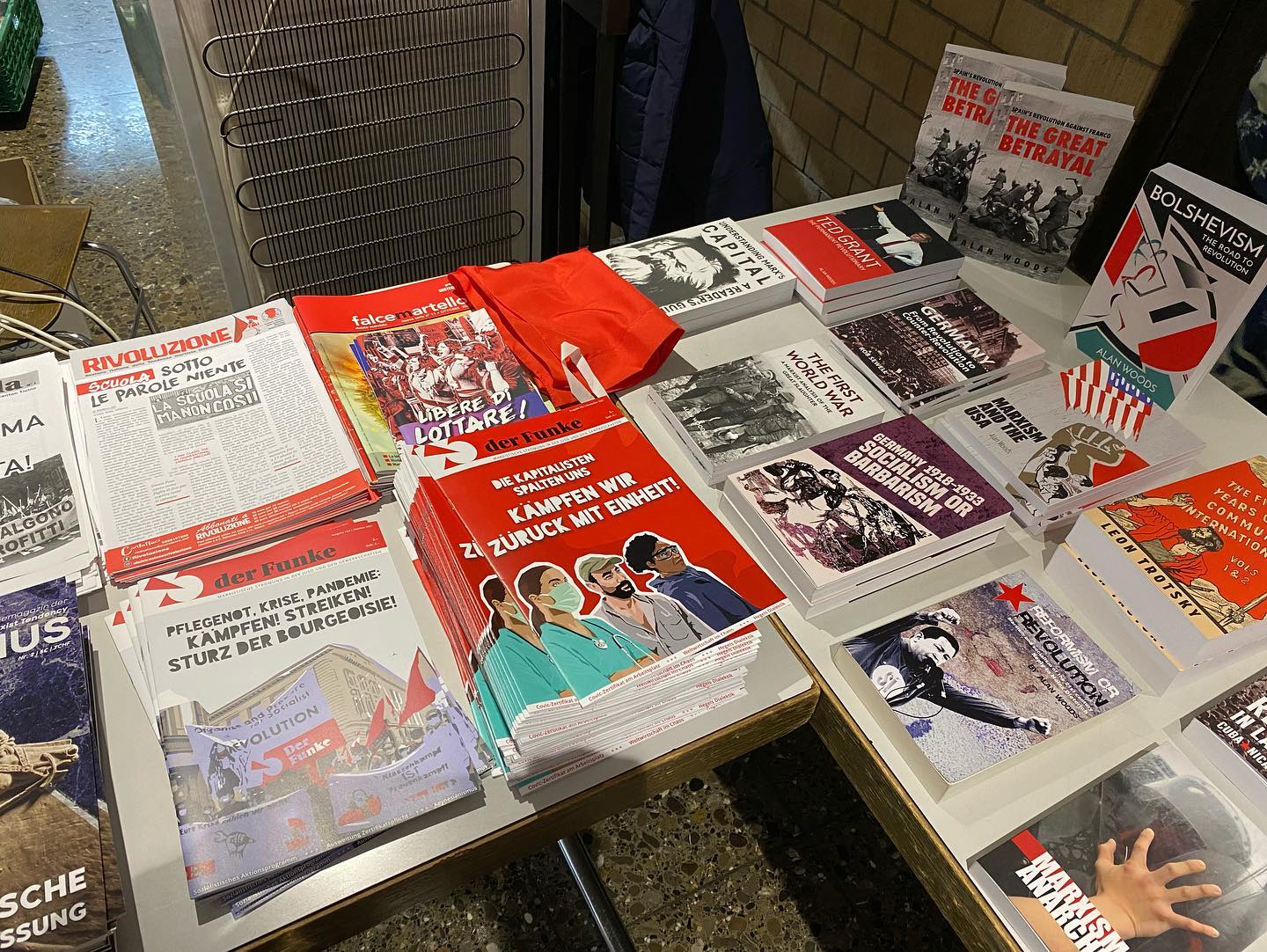 The task of Marxists is to give purposeful and militant expression to the anger of the working class. For this we need clear ideas: the ideas of Marxism / Image: Der Funke

Many activists today are caught between isolated despair and mindless activism. Marxist philosophy gives us the ideas that are necessary to overcome this opposition. In a workshop on the role of the individual in history, comrades discussed how we as individuals can actively change the world. Of course we cannot do so with absolute freedom, but we are limited by the characteristics of the society in which we live. This makes it necessary to understand these factors and work towards building an organisation big enough to actually have an impact on the course of history.

In the discussion on the question of the role of the state in the economy, the huge state interventions of recent years proved particularly topical. But a Marxist analysis shows why it is that such interventions clearly cannot solve the economic crisis. The contradictions of capitalism are not abolished by such measures but only temporarily softened by a degree. Ultimately, these state interventions raise the question of who will pay in the end: the capitalists or the working class? One thing is clear: we need to organise in order to prevent the working class from paying for the crisis created by the capitalists.

Ultimately, our aim is not simply to improve our theoretical knowledge, but to apply that knowledge to the real world in order to advance the cause of the socialist revolution. This is exactly what the workshop “Marxism v identity politics: How do we organise the revolution?” was all about. Here we discussed how the philosophy of Marxism is absolutely necessary for building a powerful revolutionary organisation: we need to combine the struggles against women’s oppression, racism, homophobia and so on, and direct them towards our common goal – socialism! 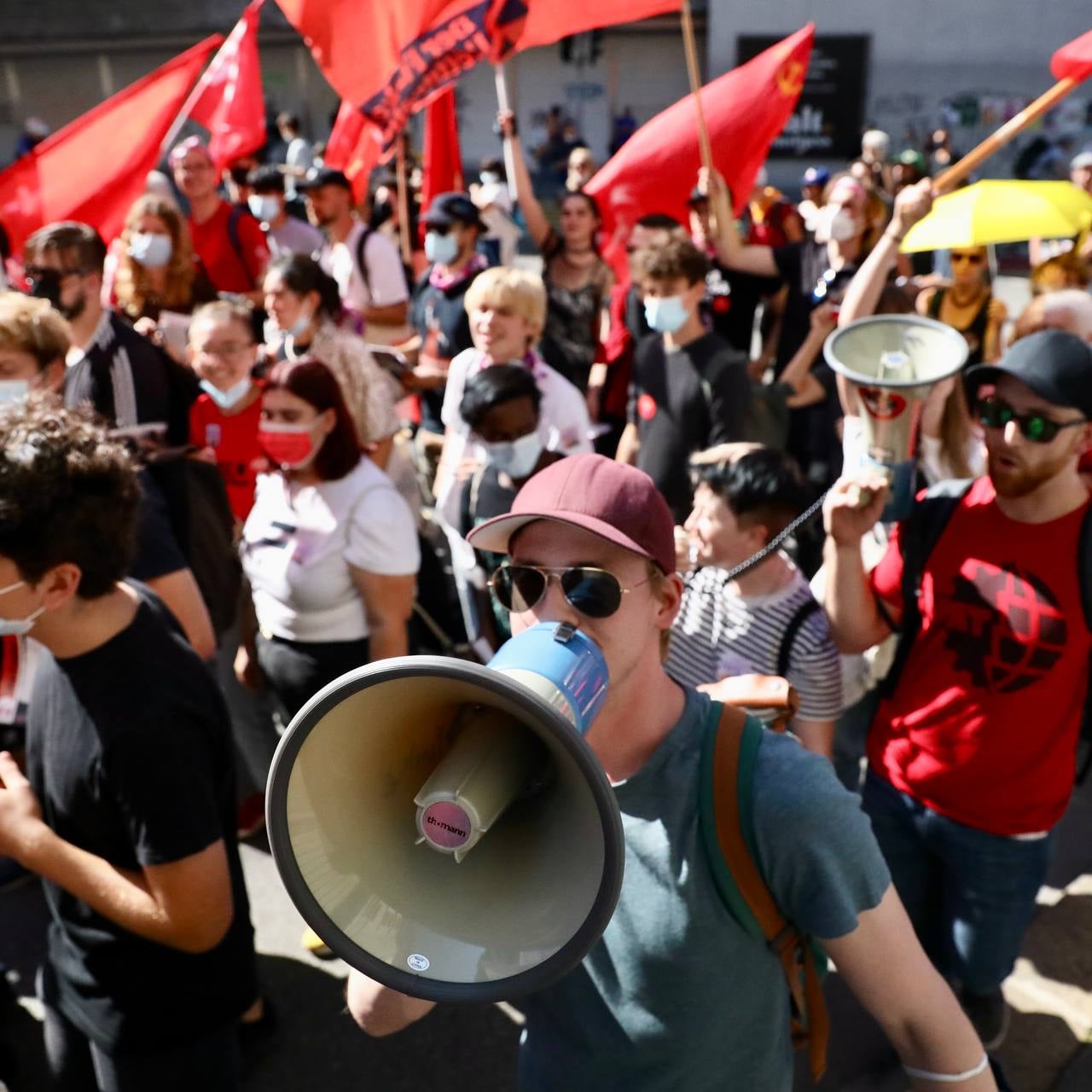 Every independent activity of workers against their bosses or against the capitalist system as a whole shows precisely how current and relevant Marxist ideas of class struggle are / Image: Der Funke

The practical character of the weekend’s talks was brought out in discussions on concrete struggles of the working class, such as the strike by workers at Smood, a food delivery service. Strikes have broken out for the improvement of the absolutely inhumane working conditions workers face in almost all major cities in the French-speaking part of Switzerland. The comrades of Der Funke/l’étincelle stand in full solidarity with their demands. Every independent activity of workers against their bosses or against the capitalist system as a whole shows precisely how current and relevant Marxist ideas of class struggle are.

The numbers of registrations, book sales (over 100 books and pamphlets were sold for over 1,400 Swiss francs) and fundraising are a testament to the enthusiasm throughout the school. This enthusiasm flowed from the high quality of the political debates, with interesting interventions from many different participants from all over German-speaking Switzerland. 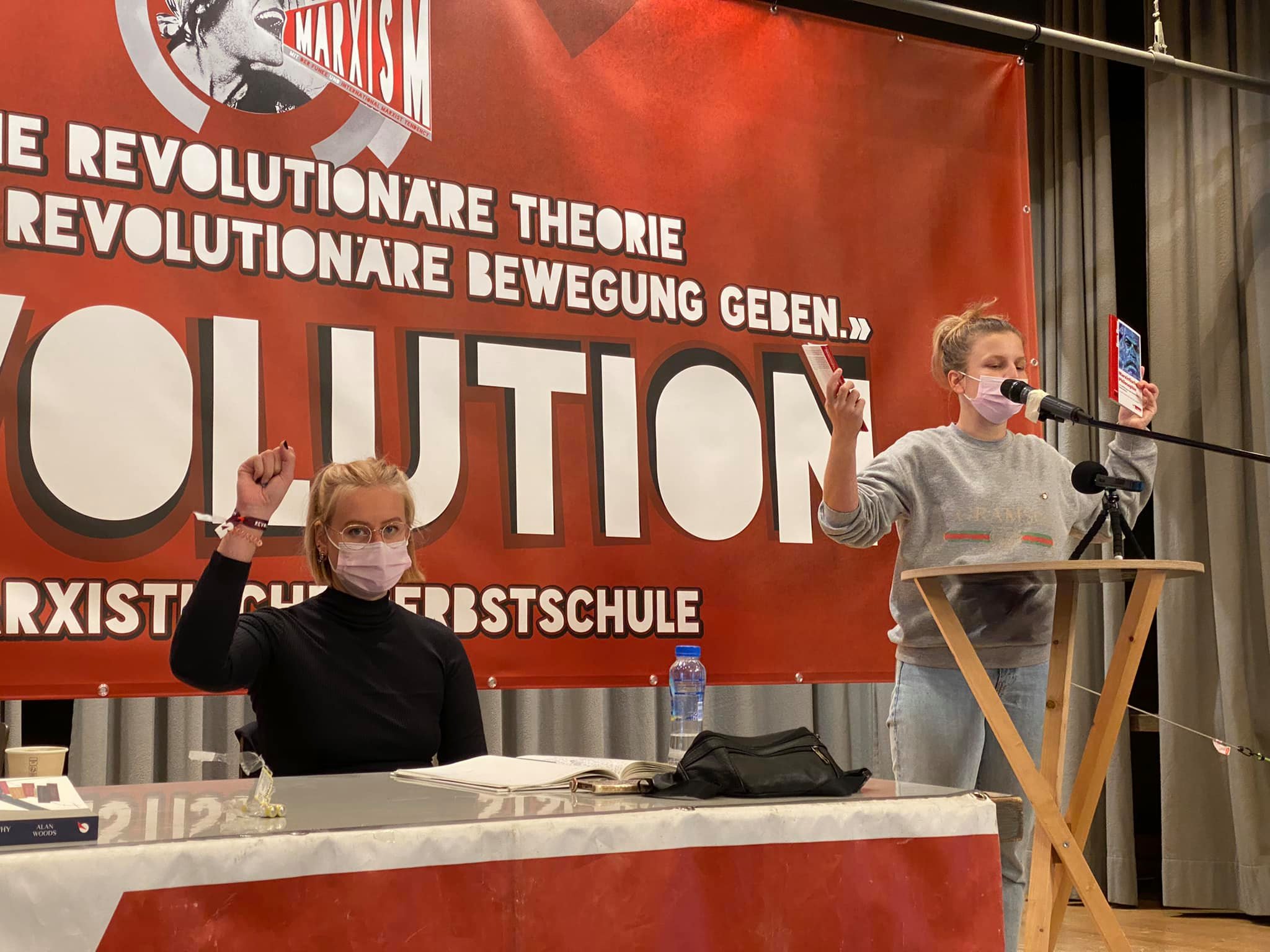 The building of a strong Marxist organisation in Switzerland is an urgent task. Nobody will solve this crisis for us / Image: Der Funke

With Revolution2021, we proved that Der Funke is capable of putting on a large and high-quality event despite the adverse circumstances. We are not that big – yet. But we are a serious organisation, and our ideas give us a foundation on which we will grow even in the current difficult situation – and indeed, precisely because of the difficult situation. The many new faces at this event are proof of this. The building of a strong Marxist organisation in Switzerland is an urgent task. Nobody will solve this crisis for us. If we do not resist, the capitalists will make us pay the full price of the crisis.

Our task is to defend the revolutionary positions of Marxism in the worsening situation and to make them accessible to a growing layer of interested activists and militants. We have organised Revolution2021 for this purpose. If you are convinced of these ideas yourself, and you wish to discuss them with us, contact us now and become part of the International Marxist Tendency.

Strikes have broken out for the improvement of the absolutely inhumane working conditions workers face in almost all major cities in the French-speaking part of Switzerland. The comrades of Der Funke/l’étincelle stand in full solidarity with their demands / Image: Der Funke