Taking back the university 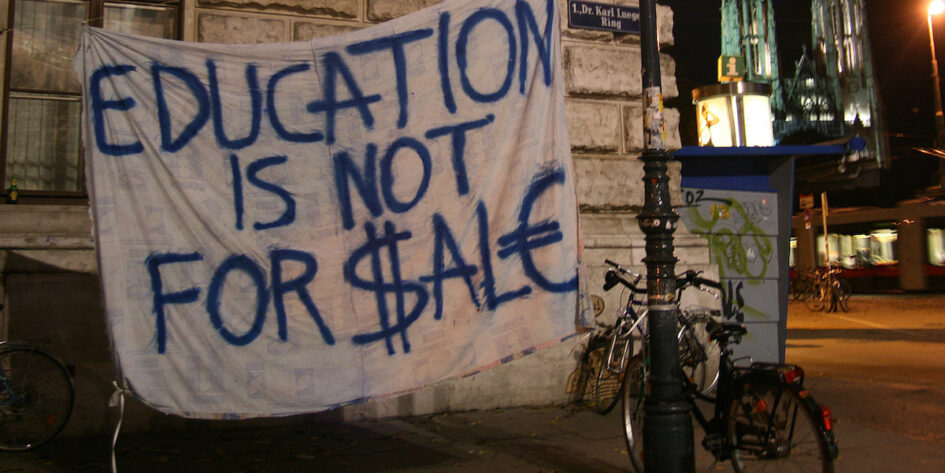 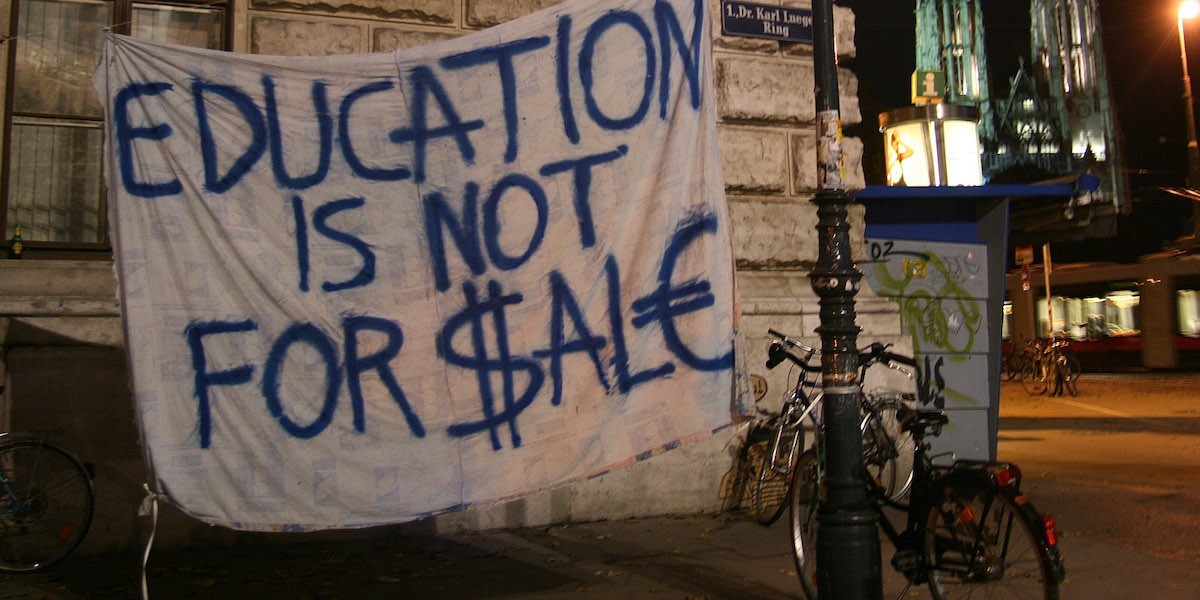 Education is a gift and it is a tool. It provides us with the potential to dismantle the world as it is and to see it anew. It is neither a commodity nor a form of debt to be capitalised on by private corporations, indifferent university leaders or hypocritical education ministers. The fact that this has become the case is a damning indictment of a generation of politicians who have commodified and sold off the future.

To talk about markets in the education sector is to talk about the very fabric of how students and educators think and act.

The UK, and with it the English system of higher education, has seen around 40 years of neoliberal marketised reform. If we are seriously interested in dismantling these systems that centre profit, competition and debt, then we need arguments, organisational structures and power that are participatory, deep-rooted and generative of further struggle.

This means thinking across all groups of education workers and students.

The reach of marketisation

Models of marketisation have been imposed on all aspects of the way that universities operate. Research and teaching are assessed by metrics that influence staff promotion and status in ways that frequently reinforce inequalities of gender, class, race and disability.

These feed into national and international university rankings that have little meaning. The weighting given to various metrics, such as graduate career destinations, tend to be influenced by students’ class background and universities’ historic status and wealth. In both cases this simply reinforces hierarchies between universities that pre-date the marketisation of higher education that began in the 1980s.

The post-war period of expansion of higher education, while state-funded, was not equal. The ‘binary principle’ separated the polytechnic – universities that were run by local councils – and the older ‘universities’. This divide continues and is now represented by the ‘Russell group’, which is a convenient marker of prestige that has enabled the maintenance of institutional hierarchy within a sector dominated by white, middle and upper-class students.

Inequalities between institutions have deepened because of the way rankings and competition for students have tended to combine. This has created pressures within the ‘market’ for students, and universities serving predominantly working-class and racially- minoritised communities have faced many financial difficulties.

Expansion of higher education through the 2000s has also been led by senior university leaders signing off on massive private loans. This financialisation has reflected and deepened existing inequalities, with universities educating working-class students tending to receive harsher repayment terms.

Consequently, this has created further incentives for greater exploitation of staff. Many universities have outsourced their cleaning and security functions. Campaigns for improved pay and conditions for these workers, and an end to outsourcing, have been an important area where victories were achieved in recent years. However, the fact that they were outsourced in the first place underlines the deep indifference shown by senior management towards their staff.

Indeed, the conventional, aloof, disembodied elitist model of ‘being an academic’ lends itself to a blindness to the actual social and economic conditions of the university and the staff that make it work, from estates to catering to IT and other crucial administrative services. Students face multiple pressures and crises because of the marketised model of higher education. Above all, in England and to a lesser extent across Northern Ireland and Wales, the decision was taken in 1998 that greater university participation would be funded through tuition fees with loans gradually replacing grants for maintenance. With fees now at £9,000 per year and harsher interest rates on loans, student debt has grown to absurd proportions. Not to mention that international students face even greater financial costs, as their fees are uncapped.

This has all been imposed by a generation of politicians and university leaders who attended university for free. Add to this the current pressures on cost of living, inadequate student maintenance, exploitative and privatised models of student housing, and we can see that students face crises far more urgent than during the last major national wave of student protests in 2010.

To reach an education system that is emancipatory, equal and sustainable we need to work across multiple organisational, social and political fronts. Students need to build a campaign of debt cancellation and urgently respond to the current cost of living crisis. With student housing, for example, rent strikes, tenant unions and student housing co-ops are answers to both immediate struggles around housing quality and long-term responses within the system that will create protective and emancipatory sites for further struggle.

Staff should not be absent from these campaigns. Mutual aid organisations set up during Covid-19 provide a model for distributing money and food that should be applied to higher education. We need to build structures that dismantle barriers between staff and students. If staff are interested in winning current disputes over pay and working conditions, building real and visible solidarity with students is essential. Since 2018 the University and Colleges Union (UCU) has seen an uptick in activity. This began with a largely successful strike about pension cuts, which would have ended defined benefit pensions completely.

The new wave of staff who are active in the UCU has resulted in greater participation and demands for democracy within the union. UCU’s last ballot result is the outcome of new forms of engagement and structured organising approaches from both national and local activists and members. Participatory, democratic, local branch structures rather than top-down union leadership, are central to building militant trade union organising in universities. The only way to create the necessary capacity is for education workers to develop a social and political consciousness of themselves: understanding how the conditions they work in are produced and what levers they can use to change this.

The structures and democratic processes that we need in our education unions and student movement are the same ones that we require for a truly publicly owned education system. Universities need to be run by students and workers. A de-commodified, decolonised and decarbonised university of the people can only be built from the bottom up.

Sol Gamsu and Kirsty Morrin are members of Beyond Education, a blog and podcast committed to reimagining education

Taking on the Philippine axis of evil

‘A Crucial Part of Colonization Is Taking Our Children’

Queering The Family Farm: Meet The LGBTQ Midwest Farmers Taking Food Justice Into Their Own Hands