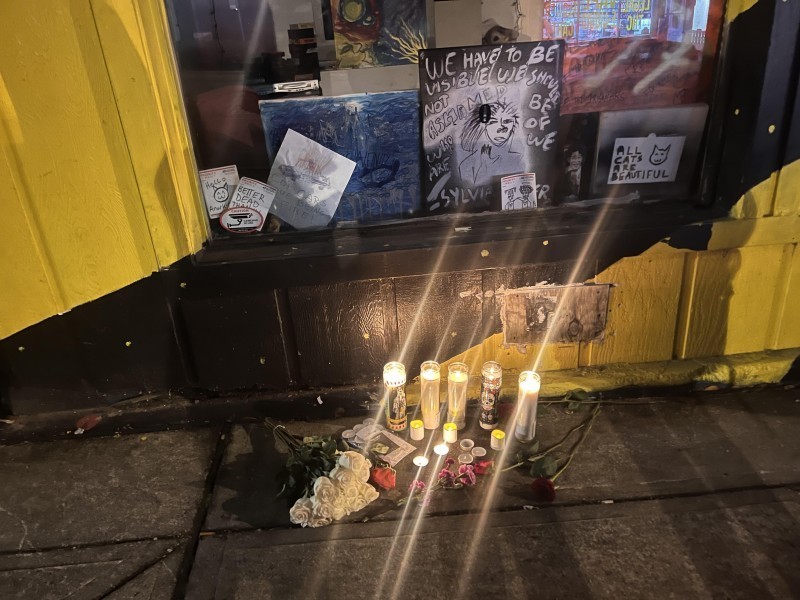 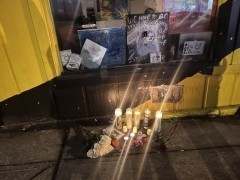 Mourners laid flowers and lit candles for Manny Paez in front of their art.
(Fight Back! News/staff)

Tallahassee, FL – The Tallahassee community convened a somber vigil, January 19, to pay tribute to the life of Manuel “Manny” “Tortuguita” “Teran” Paez, who was taken from us too soon when Georgia state troopers killed them as they were defending Atlanta Forest from the proposed construction of “Cop City.” The gathering was a poignant demonstration of collective grief and solidarity in the face of such a terrible loss.

The ceremony was an incredibly emotional occasion, with people lighting candles and providing heartfelt words of sympathy and comfort to Manny’s family and their community.

Attendees recited the words of Holly Near’s song, It Could Have Been Me:

It could have been me, but instead, it was you,

If you can work for freedom.

If you can work for freedom, I can too.

So I’ll keep doing the work you were doing as if I were two.

On the night of January 18, Paez was killed by Georgia state troopers while occupying the forestland to challenge the construction of a new police headquarters known as Cop City. This news sparked rage within the community, motivating people to come together to grieve.

Manny Paez was a 27-year-old activist and former Tallahassee resident who was a passionate proponent of environmental, economic and racial justice. They used art as a way to express their convictions and served as an inspiration to many people in the city. During the vigil at the Plant, a local organizing and creative space, many members of the Tallahassee community came together to remember Paez’s legacy and honor their life. Their friends described them as highly committed organizer, who fought to challenge oppressive systems such as capitalism, police brutality, racism and inequality.

Manny Paez’s name will not be forgotten in Tallahassee, as the participants promised to continue to work for justice in their memory.

Trish Brown states, “Manny’s willingness to love unconditionally, when confronted with their shortcomings while relentlessly showing solidarity has inspired me to continue the fight for our safety and freedom and, to also fight with unconditional love on the importance of us all pulling together as a community with love and solidarity. We are all in this together, and our lives are too precious; we must love one another and support one another. At the end of the day, Manny, like many, lost their life fighting for the justice and the liberation we all deserve.”

Paez had a unique connection with a great many people in the city, and their loss had an impact on us all. As we continue to lament Manny’s death and recognize the work they did, it’s evident that there is still much that can be done to guarantee their legacy remains alive in Tallahassee.

The death of Manny Paez has left the Tallahassee and the Atlanta community overwhelmed and searching for solutions. However, Defend the Atlanta Forest members are set on keeping Paez’s memory alive and continuing to fight against the building of Cop City.

Vigils are being arranged across Tallahassee and Atlanta. In memory of Manny Paez, let us unite to sustain their legacy and keep battling injustice.

Freedom Road Socialist Organization mourns the passing of Jean Pestieau, of the Workers Party of Belgium

“Learning Loss” and the Crisis of Education

A Terrible Loss for DIE LINKE and the Rosa-Luxemburg-Foundation: Axel Troost Obituary