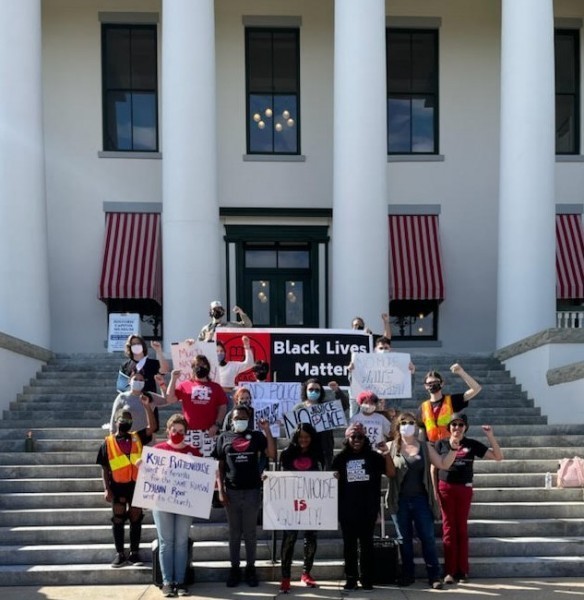 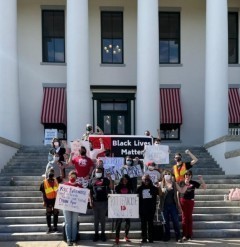 Tallahassee, FL – Tallahassee Community Action Committee, Freedom Road Socialist Organization, and Students for A Democratic Society held a protest, November 20, against the acquittal of Kyle Rittenhouse, who killed two protesters in Kenosha. TCAC called an emergency protest the night before, urging community members to come out and fight against the white supremacist vigilantism.

Regina Joseph, a member of the Freedom Road Socialist Organization denounced the acquittal, stating, “I am not surprised that this happened. That does not make my anger any less valid. Kyle Rittenhouse showed up to a protest, was met with police who talked to him, who knew what he was going to do, and allowed him to go into the protest. To ‘quote’ defend private property. Because in this country private property is more important than Black people.”

Joseph compared the lenient treatment of the racist killer to the treatment of Black Lives Matter protesters during the George Floyd Rebellion. “No matter what you do to fight in the most just way, it will be met with violence. We need to overthrow this racist, capitalist system, right now.”

Field director for the TCAC Delilah Pierre spoke about the incident and that November 20 was also Transgender Day of Remembrance, comparing the systemic violence transgender people face to the way the system supports white supremacist violence. Pierre stated, “Thinking about how many names, how many trans people have literally been killed by our system, by our state, by individuals who have been empowered to kill them, to murder them, without consequence.”

Pierre countered the claims made that Kyle Rittenhouse’s actions weren’t racist because he killed white people. She also pointed out the hypocrisy in the American justice system’s treatment of Black activists compared to racist and right-wing protesters, stating, “People in our own organization are facing more punishment than people who overran the Capitol.”