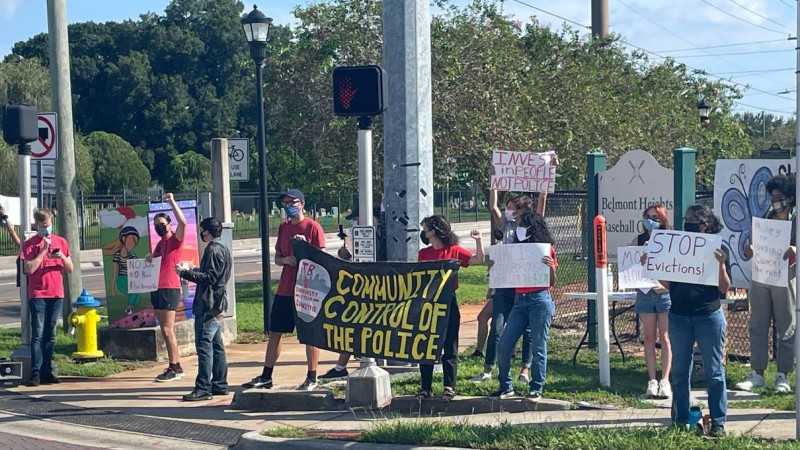 Tampa, FL – On September 5, about 25 protesters from Tampa Bay Community Action Committee (TBCAC), community members and other activists rallied to demand an extension to the eviction moratorium that was abruptly ended by the United States Supreme Court. In Tampa alone, 5000 units are due to be evicted in the near future. The protesters also demanded the cancelation of late rent payments over the course of the pandemic and for the city to invest in the community, not the police.

In addition to the looming evictions, many studies have shown that Tampa is the city with the fastest growing rent costs in the country. With such a huge housing crisis, the city of Tampa has neglected to offer tenants any sort of relief, including the tens of millions of dollars that the federal government granted to Tampa for this very issue.

“It was great to see so many people come out determined not to let the landlords and the city use this crisis as an opportunity to evict so many folks, who are mostly from the working class and communities of color,” said Joe Nohava, an activist with Tampa Bay Community Action Committee.

In the midst of this crisis, the city has instead voted to spend $100 million dollars on a new Tampa police headquarters and a “City Center” of offices in East Tampa, a historically African American area of Tampa.

“It is no coincidence that many of the evictions as well as the new police headquarters will be in East Tampa,” said another member of TBCAC, David Jones. “This is a clear example of the city and real estate developers to gentrify this side of town.”

The protesters ended the event with a call to action for more rallies against the city’s lack of housing relief and an end to the planning of the new police headquarters.