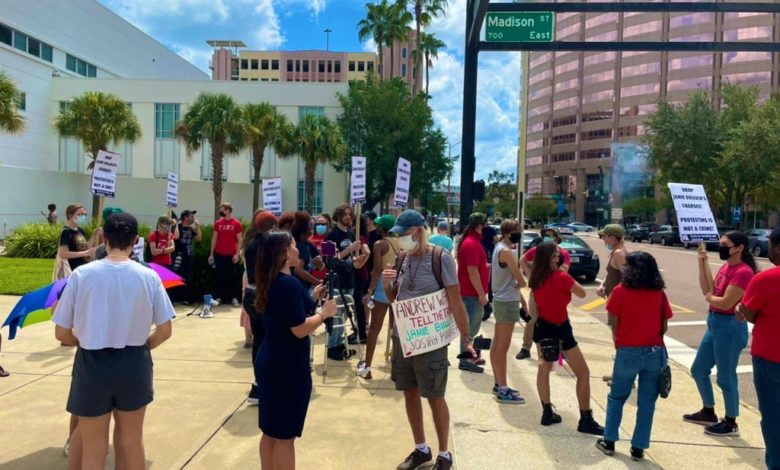 On Sept. 13, Tampa Bay Party for Socialism and Liberation and supporters of Jamie Bullock, a 22-year-old life-long Tampa resident and activist, rallied outside of the Old Hillsborough County Courthouse demanding that her charges be dropped. Bullock was brutally arrested at the 4th of July protest in 2020 for protesting against racist police brutality.

A group of about 50 supporters gathered with signs that read “Drop Jamie Bullock’s charges! Protesting is not a crime!”

Bullock spoke first, opening up about the many struggles she has faced since the arrest.

“I have considered suicide,” she said. “I’m afraid and anxious from the pressure of this entire situation.”

She explained that she had many difficulties in obtaining housing due to these charges, and even had to pay double for a security deposit on the place that she is now staying in.

PSL member Ruth Beltran spoke next. “This is exactly what happened to our comrades in Denver, who were facing up to 50 years in prison.” She explained that it will take public pressure to get these charges dropped and that we need to stand by Bullock until they are.

Many more organizers from Tampa spoke out in support of Bullock. Protesters then marched around the block chanting “What do we want? Justice for Jamie! When do we want it? Now!”

At the end, Bullock’s best friend, Tay George, called for a moment of silence, then gave a short speech. “I chose to be here for Jamie, and I will choose that every time. We have to be there for each other, that’s how the revolution will happen.”

Currently in the case, Bullock is fighting a motion in limine — a pretrial motion asking that certain evidence be found inadmissible — filed by the state. If approved, the motion would ensure that crucial points of evidence that prove her innocence would be prohibited for use. The state wants to restrict any mention of her constitutional rights, the brutality of the police and her lack of criminal history, among other things.

Bullock said that when she found out about the motion, she was completely shocked. “It just seems completely unconstitutional,” she said. Although Bullock says she has faith that it won’t be approved, she also knows that anything is possible. This case is a clear example of how the state can just throw the constitution aside when convenient to their ends.

Bullock will find out if the state’s motion will be approved on Sept. 28. Her hearing was scheduled for Sept. 13, but the state pushed it back in a cowardly attempt to avoid public scrutiny.

On the morning of the July 4 protest, protesters marched from the Walmart off the highway on North Dale Mabry to the intersection of North Dale Mabry and West Spruce Street. Protesters remained nonviolent throughout the march, despite 21-year-old Noah Armstrong driving his Ford Crown Victoria through the intersection, forcing people to jump out of the way to avoid getting hit.

Armstrong was charged with reckless driving and sentenced to three months of probation, of which he only served 3 days after paying his court fees and completing a defensive driving course.

Protesters were able to occupy the intersection for an hour and a half before the police started to gather at the Chase Bank nearby. Police ordered the crowd to leave as protesters chanted “We have the right to assemble,” “This is a peaceful protest,” and “Where’s our freedom?”

Police began terrorizing protesters soon after their announcement. They rode into the protest on bikes and then sprayed, arrested and beat demonstrators. Bullock was one of the many who were arrested.

Bullock watched as the police brutalized one of her friends before attacking her, grabbing her braids and tackling her to the ground. The next thing she knew, she was in handcuffs.

The prosecutor has attempted to give her a plea deal, but she maintains that she did nothing wrong.

More than anything, Bullock said that she wants people to show up for her at her hearings and by signing her petition and donating.  “Everyone can click away when they’re done reading articles or seeing graphics. This is my reality,” Bullock said.

She has lost out on job opportunities since her arrest. She obtained employment with FedEx back in February but was fired after three days of working there when her background check returned a “huge red flag.” They fired her as a direct result of her pending felony charge.

“I didn’t want to work in the food industry again, but I’m being forced to,” she said.

During all this time, Bullock has still found ways in which to express herself creatively. She has started making rugs and selling them on her Instagram.

Bullock shouldn’t have to go through any of this. She should be enjoying her freedom and living a fulfilling life. However, she committed the crime of being a Black woman in America who spoke out against the current system.