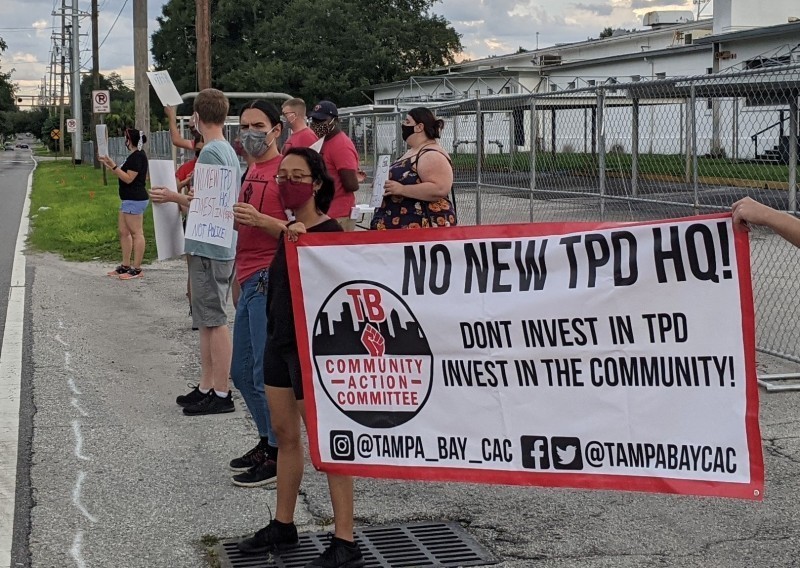 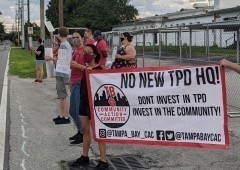 Protest to stop the new TPD Headquarters.
(Fight Back! News/staff)

Tampa, FL – The Tampa Bay Community Action Committee (TBAC) is celebrating the delay of plans by the Tampa City Council to build a new Tampa Police Department Headquarters in the majority-Black community of East Tampa.

The George Floyd Uprising of 2020 touched every part of the United States, and in its wake scored historic victories, such as the conviction and sentencing of killer cop Derek Chauvin to over 22 years in prison. However, when the people win there is a reaction from those in power. These new attacks even occur on the local level. In Tampa, the city council proposed a plan for the budget to fund the construction of a new Tampa Police Department Headquarters (TPD HQ) and City Center for over $100 million in East Tampa.

City officials have said that these plans for the new headquarters and City Center are popular and desirable; they said the people of East Tampa want more police and a government complex smack-dab in one of their neighborhoods. That was the city council’s faulty justification for passing these plans on March 18, 2021. East Tampa Community Advisory Committee Chair Connie Burton said the city council passed these plans, “Like a thief in the night.”

The city did not ask for input from the people of East Tampa, and that is made shockingly clear when speaking to anyone there about the plans. Since March 18, members of TBCAC have been flyering, tabling and organizing events to spread awareness of, and fight back against, the new City Center and TPD HQ. When we first started the “No new TPD HQ” campaign, no small business or person walking on the streets had heard about the plans. Today more people know about the TPD HQ and City Center. This is partly because of our campaign and, to a much lesser extent, because of the city council, the Tampa police, or Mayor Jane Castor.

After the plans initially passed there were very few media updates. Nearly all of the particular information we have on the City Center and TPD HQ comes from pestering city council members or other city employees. Members of TBCAC attended the “City Center Sign Unveiling” put on by the city on August 18. While the event was ultimately cancelled, TBCAC members spoke with a representative of the city, Frank Crum, who gave details on the proposed building. The representative stated that the City Center would contain a tech training program, culinary program, small business affairs, and some local governmental departments. Additionally, Crum stated that there are three different potential locations for the new TPD HQ: across the railroad tracks next to the City Center on East Hanna Avenue or one of two other undisclosed locations.

The “No new TPD HQ” campaign and the future

Beginning in March of 2021, TBCAC has actively protested and spoken out about the proposed new headquarters and City Center. We have held protests at the proposed construction site, attended city government meetings, and talked with East Tampa residents.

At the most recent TBCAC event protesting the new TPD HQ and City Center that was held October 9, reporter Briona Arradondo from Fox 13 stated that City Councilman Orlando Gudes told them the TPD HQ move had been “cancelled.” TBCAC members then contacted the office of Orlando Gudes for confirmation. Gude’s assistant, on his behalf, stated that the move was delayed and would not elaborate further.

While the news that the new TPD HQ is on hold is good and represents a win for the people of East Tampa, our campaign is not over. The plans for the unneeded City Center are still going ahead and it’s still not clear if the TPD HQ will be built in East Tampa. The city continues to push the idea that more police and more small businesses will keep East Tampa residents safe and make them prosperous. But these plans are only one part of the city’s larger gentrification project.

It takes the power of the people in organization, in common cause, to stand against gentrification and police crimes. The Tampa Bay Community Action Committee and others will continue to fight against the city’s plans and demand that the money be put into programs that will actually help East Tampa residents.

A video reading of this article can be viewed here: https://www.youtube.com/watch?v=5UP96g_MG9g&t=7s