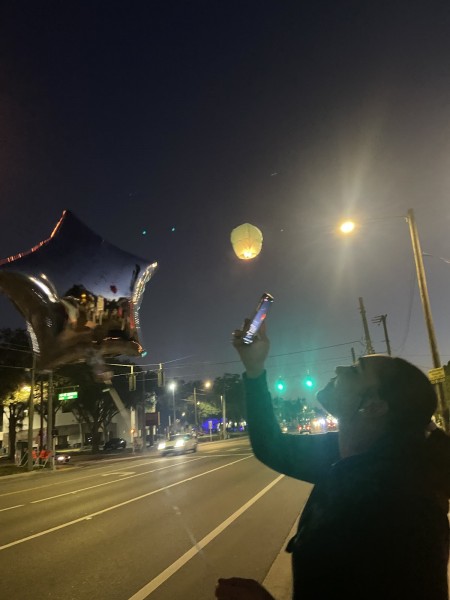 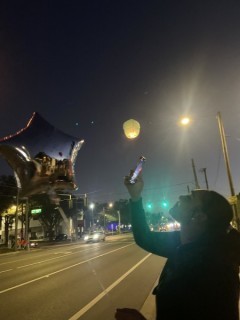 Mother of Josiah Pinner, Joanne Rojas, watches lanterns float away in his memory.
(Fight Back! News/staff)

Tampa, FL – Dozens of family, friends and community members gathered on January 11 to demand justice and honor the fourth angelversary of Josiah Pinner, a 15-year-old killed by a speeding Hillsborough County deputy.

On January 11, 2019, Deputy Philip Montesi was driving 21 miles per hour over the speed limit in an undercover car on a dimly lit road in a residential area when he struck Josiah Pinner. Pinner was walking across the road with Damien Foster, who was walking with his bike.

Deputy Montesi did not immediately stop or call an ambulance when he struck Josiah, he returned to the scene more than ten minutes later, but it was too late. Montesi only received a five-day suspension and a driving class for the murder of the Tampa teen.

At the vigil, at 6:25 p.m., Josiah Pinner’s mother, Joanne Rojas, called for attendees to release balloons and lanterns in accordance with the time her child was struck by Montesi. The lanterns were lit and floated off one by one in the same direction creating a path to the stars in a clear night sky.

“He was a light to everybody. He can’t be replaced. The lanterns, their light is like him, it’s hard to explain, but it’s him,” said Tammy Pinner, grandmother of Josiah.

Because Montesi was on duty at the time he killed Josiah Pinner, he could not be sued as an individual. Former State Attorney Andrew Warren declined to pursue a homicide charge against Montessi because of “insufficient evidence.” Montesi has a number of traffic violations on his record, including clipping a pedestrian while the deputy was speeding and distracted by using his in-vehicle computer.

With little choice left, the Pinner family filed a lawsuit against the Hillsborough County Sheriff’s Office (HCSO) for negligence. They reached a settlement in March of 2022 for $200,000.

The Pinner family paid nearly $18,000 to relocate the grave of their child, after it had been repeatedly vandalized.

In another case, in September of 2022, Deanna and Andrew Joseph, parents of Andrew Joseph III, won their civil court case against HSCO under the Wrongful Death Act and were awarded $15 million. HSCO was found responsible in the death of 14-year-old Andrew Joseph III, who died while crossing Interstate 4 after being wrongfully arrested, photographed and ejected from the Florida State fair.

No officer was charged in the death of Andrew Joseph III due to the difficult nature of prosecuting Florida officers who are protected by qualified immunity. Florida’s statute for qualified immunity, the Law Enforcement Officer Bill of Rights, gives police extra protections that regular citizens do not have when being accused of a crime, such as choosing the officers who will question them.

“Philip Montesi killed Josiah Pinner, that is the truth and there is no way around it. He should be in jail right now for manslaughter. No police officer should ever be shielded by law when they commit such a horrific act,” said Simon Rowe, member of Tampa Bay Community Action Committee and vigil attendee.

Candles illuminated Joanne Rojas as she spoke about reopening her son’s case to continue the fight for justice and accountability. After watching the Josephs’ long drawn out battle end in an historic win for police accountability, Joanne Rojas knew she had been cheated. Now equipped with the same lawyer as the Joseph family, she is pursuing a case against the city of Tampa and her previous lawyer.

“I just want them to know what they took from us, that’s it. I want justice. Justice needs to be served; they took a precious life from us,” said Tammy Pinner.