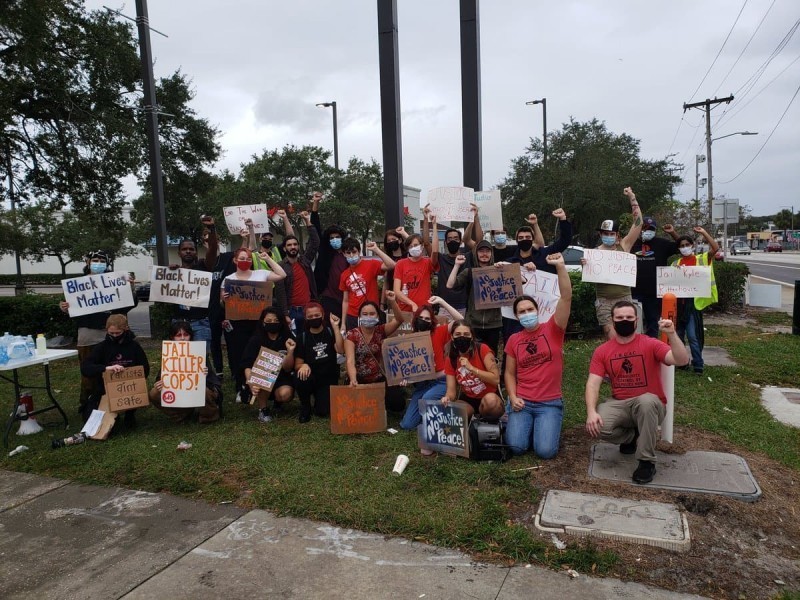 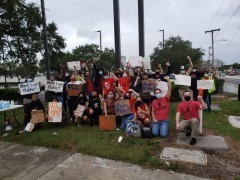 Tampa protest against the Rittenhouse verdict.
(Fight Back! News/staff)

Tampa, FL – At least 40 people gathered November 21 on a busy intersection off Hillsborough Avenue in East Tampa Florida to demand justice for the victims of right-wing vigilante Kyle Rittenhouse. Only days before, in a sham trial, Rittenhouse was found not guilty on all charges stemming from his rampage in Kenosha in August of 2020. The crowd chanted “How do you spell racist? K-Y-L-E” and “No justice, no peace, vigilantes get off our streets.”

Uniting around the demand to throw Rittenhouse in jail, the event was organized by the Tampa Bay Community Action Committee and Tampa Bay Students for a Democratic Society. The Tampa Bay chapter of the Party for Socialism and Liberation and the Central Florida district of the Freedom Road Socialist Organization also attended and spoke.

Speaker Caleb Ochsner of SDS said, “Many students are engaged in left-wing activism of all sorts. It’s important for students to mobilize because the BLM movement is under attack and it’s the biggest movement in recent memory. This is an issue of interest to people fighting for a whole range of issues because it gives the right the thumbs up on harassing and attacking us.”

The demonstration joined with a national call to action on the part of the National Alliance Against Racist and Political Repression.