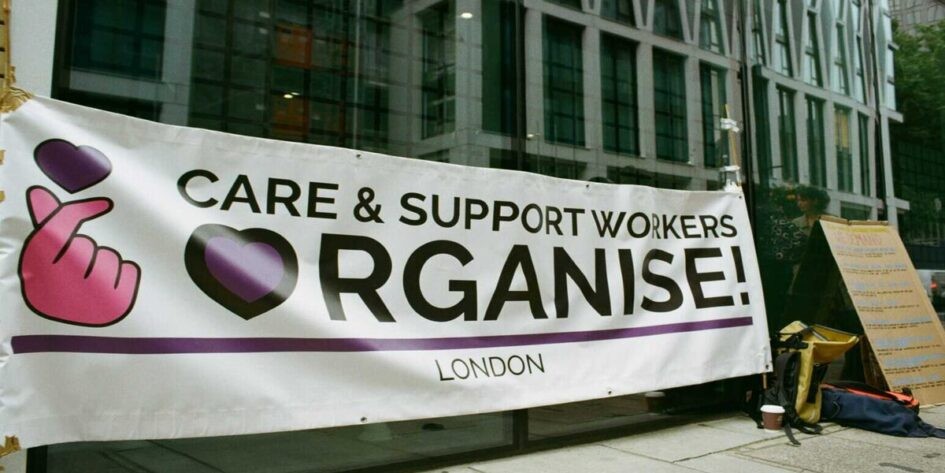 Social care is not working. It is a system that is under-funded, difficult to access, and where the only winners are profit-making private care providers. Workers are abandoning the sector in unprecedented numbers while those requiring support are often left without even their basic needs met, or pushed into debt covering extortionate care costs. Huge gaps are filled by the work of under-supported unpaid carers. The government’s recently-announced ‘solution’ is to throw scraps of cash at a broken system when what we need is a radical transformation of the sector.

I am a support worker in an accommodation service in East London and a member of the group Care and Support Workers Organise (CaSWO!). Made up of social care workers from across a number of trade unions, we have come together to encourage union membership and organising within the sector and to campaign for improved pay and conditions and a better social care system for all.

Social care currently relies on the exploitation of a workforce made up overwhelmingly of women and disproportionately of migrant workers and workers of colour. Over two-thirds of us receive less than the real living wage and we are often employed on precarious, zero hour contracts. As the Supreme Court’s ruling in March on sleep-in shifts laid out, we are routinely and legally paid below the minimum wage. I get £30 per night for my sleep-in shifts, which works out at £3.55 per hour. Failure to pay travel time again means many find themselves being paid far below the minimum wage. It is hard to imagine other sectors where this systemic underpayment would be permitted. Professor of Law, Lydia Hayes, argues this is the result of the ‘gendered inadequacy of labour law’ that devalues the work performed primarily by working-class women.

It has been encouraging to see social care being debated in the mainstream media but discussions have been overwhelmingly confined to the dysfunctions and inequities of the British tax system or failures in strategy of political parties. Rallying around existing calls to tax wealth is easier than the more complicated conversations that are also required about what a radically better social care system would actually look like. We need to reject the framing of the social care crisis as being an issue solely of balancing the books (always a dangerous narrative in itself) and instead articulate our demands for creating a society that truly values care work.

CaSWO! believes a £15 minimum wage for social care workers would be a good place to start. This is something GMB are already campaigning for and which the recent TUC Congress passed a motion in support of. We must also be paid for all the hours we work, entitled to full sick pay, and not forced on to precarious contracts against our will.

Our struggle as workers will fail unless we also work in meaningful solidarity with our communities and those who use social care services. While we of course want better pay and conditions for workers, and believe that achieving this in turn will lead to better quality of support, this alone is not enough. We support the call from the Disabled People’s Movement for a National Independent Living and Support Service and are demanding social care services that are free at the point of need, publicly owned, and through which those in receipt of support can realise their right to independence, dignity and inclusion, and equal participation in society.

Social care has been considered difficult to organise and there are undoubtedly challenges. We are a workforce that is very fractured with high staff turnover. For instance, the organisation I work for has over 600 employees spread across over 60 services. Even locating and connecting with workers in this context is challenging. I am lucky to be part of the Unite Housing Workers Branch who have provided invaluable support in reaching and engaging with workers.

Organising here can often feel like we’re starting from scratch. Part of the work is often telling people what a union is and what being part of one can do. One of our members wasn’t even aware she could join a union and thought they were just for registered professions like nurses or social workers.

Despite the challenges, we are witnessing exciting activity emerge in pockets of the sector. UVW’s Sage Nursing Home members demonstrate the sort of creative and militant care worker organising I hope we will be seeing more of. We have Sage Workers involved with CaSWO! and I’m always impressed by their unity and strength. As I have heard one of their reps, Bile, say, ‘change can and will happen as long as there are people like us who are coming together and are willing to take the risk. We are like a family, when you touch one at Sage, you touch everybody.’ The work they have done in building support amongst the local community is a lesson for all of us.

Ultimately, a society that truly values care is one that benefits everyone. As the Women’s Budget Group has demonstrated, investment in care is an excellent way to stimulate employment and reduce the gender employment gap. Care jobs are also green jobs and could play a central role in a green recovery. As with healthcare, access to decent care should be considered a fundamental human right. We need to be organising together to realise this vision of a care-centered society.

Billie Cooper is a support worker working at a mental health accomodation service in East London, a Unite the Union workplace rep and a member of the Unite Housing Workers Branch.