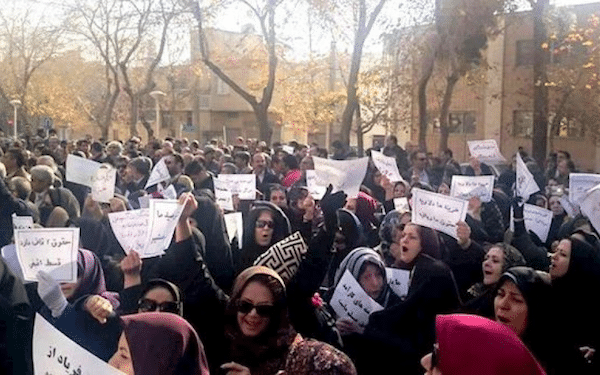 THOUSANDS of protesting teachers assembled in front of the Majlis, or Iranian parliament building, in central Tehran today demanding justice and the release from prison of a leading teacher trade unionist.

Teachers staged rallies too at the headquarters of education authorities in 25 provinces and 60 cities across Iran.

The gatherings in Tehran and Shiraz were particularly huge in the culmination of two days of action by teachers and workers in the education sector throughout the country.

Mohammad Habibi, the spokesperson of the Iranian Teachers Trade Association (ITTA), told Jamshid Ahmadi, assistant general secretary of the Committee for the Defence of the Iranian People’s Rights (Codir) that the nationwide demonstrations and public assemblies have been organised by the Co-ordinating Council of Educators/Teachers Associations (CCETA) to protest against the non-implementation of a teacher job evaluation scheme, as well as the failure to bring about the proper equalisation of pensions for retired teachers.

The protests coincided with President Ebrahim Raisi putting Iran’s draft budget to the Majlis. The CCETA has charged that the budget allocated for the implementation of a fit and proper job evaluation scheme for teachers across the country is only a fraction of that required and has criticised the government for playing loose with people’s livelihoods.

And it slammed the government for having arrested leading ITTA official Rasoul Badaghi.

“Mr Rasoul Badaghi, a member of the board of directors of the Islamshahr ITTA, has been arrested by security police violently and in an undignified manner.

“Mr Badaghi is one of the most prominent and dedicated trade union activists [in Iran] and has already spent seven years in prison for his legitimate union activities, but he has never stopped demanding justice and has bravely kept to the path of seeking rights and fulfilling the demands of teachers and students.

The CCETA demands the immediate and unconditional release of Mr Badaghi, and other imprisoned teacher activists, as well as the cessation of the summoning and taking legal action against trade union activists.

Codir has urgently called upon the trade unions in Britain, particularly the teacher and education unions, for solidarity with the protesting teachers and educators in Iran as they bravely make their stand against the ruinous policies of the government there.

They should demand the immediate and unconditional release of Rasoul Badaghi and other protesting teachers, it urged.

NSW teachers strike should pave the way for further action