Ten Years Later, The Fight For $15 And A Union Continues 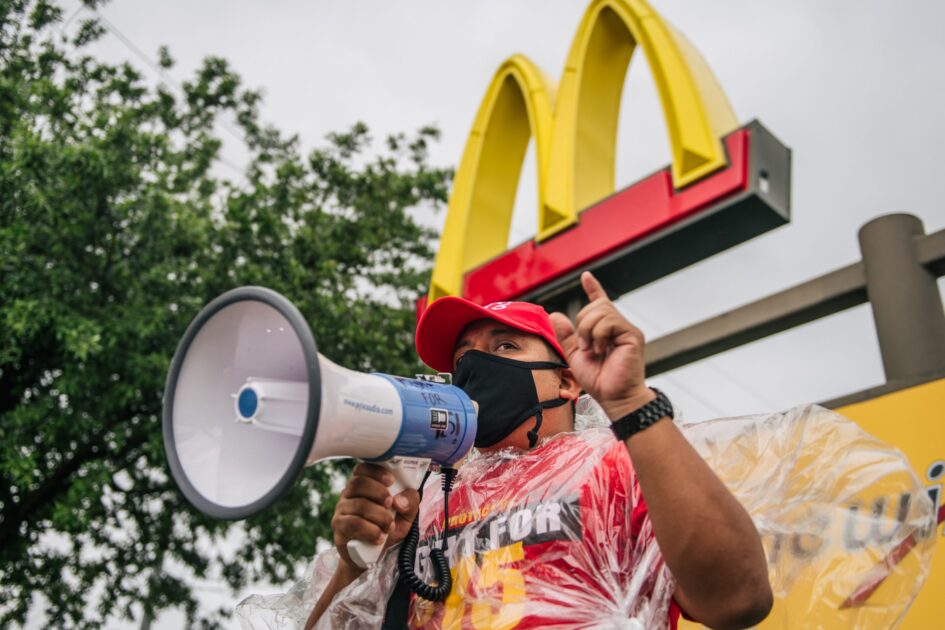 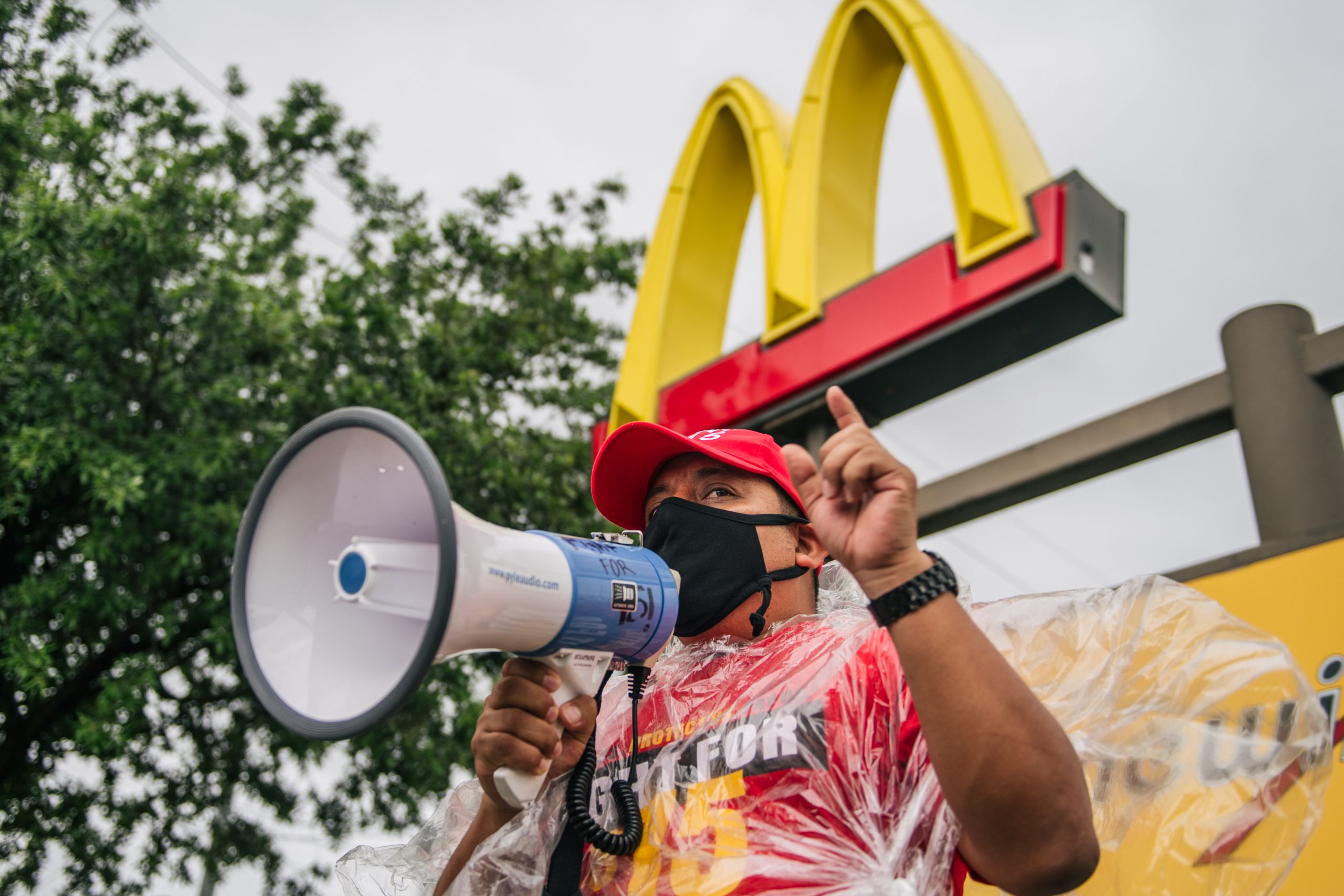 Ten years later, the Fight for $15 campaign has won $150 billion in wage increases for 26 million workers, but the struggle continues as the federal minimum wage remains at $7.25, and a third of US workers make less than $15 an hour.

On Nov. 29, 2012, over 100 fast food workers in New York City walked off the job to demand that their wages be increased to $15 an hour and to finally have a voice in their workplaces through union representation. That walkout was the beginning of a movement—a movement that articulated and emerged out of the need for human dignity and democracy in the workplace; a movement that has forcefully asserted that highly profitable industries dominated by multi-billion and multi-million dollar corporations can afford to pay their workers a living wage and allow workers to safely voice their concerns and address issues that impact them and their work.

Out of those worker-led demonstrations a decade ago the Fight for $15 and a Union was born, a global campaign pushing to increase wages and improve working conditions for workers in low-wage jobs, from the fast food industry to retail.

Ten years later, the Fight for $15 movement has won $150 billion in wage increases for 26 million workers, organized strikes for thousands of workers in dozens of cities, and reached 33 countries on six different continents.

Since 2014, with the Fight for $15 movement setting the benchmark for a $15-an-hour minimum wage, 30 states and Washington, DC, have increased their minimum wages, and 46 localities have adopted minimum wages above those set by their respective state legislatures. Some of the largest employers in the US have also raised their minimum wages to $15 an hour or more, including Target, Costco, Amazon, Best Buy, Lululemon, Macy’s, CVS Health, every major US bank, Walgreens, and Sam’s Club.

But the fight is still very much ongoing: The federal minimum wage has remained at $7.25 an hour since 2009 (this is the longest period in US history without an increase to the federal minimum wage), and nearly one out of every three US workers still make less than $15 an hour (that’s nearly 52 million workers, according to a study published by Oxfam America in March 2022). The buying power of $15 in November 2012 would be equal to that of $19.42 in October 2022, after adjustment for inflation.

Terrence Wise, who currently works at Taco Bell in Kansas City, Missouri, and has been involved with the Fight for $15 and a Union movement for the past decade, has worked in the fast food industry for over 20 years. His mother also worked in fast food for three decades.

Wise told TRNN that he has witnessed firsthand changes to the fast food industry and to the general landscape for low-wage workers since the onset of the Fight for $15 campaign; the most prominent change has come in the form of workers collectively organizing to voice their concerns about pay and working conditions. A few months ago, in fact, employees at the Taco Bell where Wise works went on strike over ongoing safety concerns and pay issues.

“We’ve experienced homelessness. We’ve gone nights without food on the table for the kids, and this is while working full time in the richest country on Earth,” said Wise. “I go to my bosses… and I tell them I see an eviction coming up or lights getting cut off if I don’t get more money, more hours, only to be met with silence.”

Wise currently makes around $16 an hour, but emphasized that a living wage in Kansas City is upwards of $22 an hour. Despite him and his fiance both working full-time over the years, often working multiple jobs, they’ve constantly struggled to make ends meet, which is why, Wise notes, he hasn’t been able to afford to see a doctor or a dentist over the past two decades.

“We’ve seen victories, we’ve seen wage increases, we’ve seen workers at places like Starbucks and Amazon winning their unions, but we still have a long way to go for the working class as a whole,” said Wise. “ It’s been challenging, but it’s a fight—that’s why it’s called the Fight for $15—and we have to continue to work and come together to make it happen.”

One of the biggest recent victories of the Fight for $15 movement involved the organizing of dozens of strikes throughout California in support of AB 257, which Gov. Gavin Newsom signed into law in September 2022. The bill paves the way for the creation of a fast food industry council, which will represent over 500,000 rank-and-file fast food workers in the state, voicing their concerns regarding working conditions and regulations in the industry. Fast food corporations are currently pushing for a voter referendum to overturn the legislation.

“It’s a big step in the right direction to have fast food workers be at the table. I think it’s a big part of what we were fighting for over the past ten years,” said Adriana Alvarez, a former McDonald’s worker in Chicago, Illinois, who traveled to California to participate in the demonstrations supporting the passage of the legislation.

Alvarez first got involved with the Fight for $15 and a Union in 2014, participating in several strikes and organizing petitions to demand pay increases and a collective voice on the job for workers. After years of not receiving any pay increases—or, at best, very marginal raises—she and her coworkers started securing substantial wage increases after they decided to take action and strike for better pay. This, as Alvarez told TRNN, is a testament to the fact that workers’ lives and jobs would improve significantly if they actually had a voice on the job (and if bosses actually listened to them).

“Having a voice on the job is important, to have someone that we can go to and voice our concerns is a big part of Fight for $15 and a Union. Without having a clear pathway as to who we can talk to, we’re just lost, and it’s a never-ending cycle,” added Alvarez. “Working at McDonald’s, it’s really tough working there, so I think that’s what kept me going for so long.”

30 years later, 63% of Russians regret the dissolution of the Soviet Union