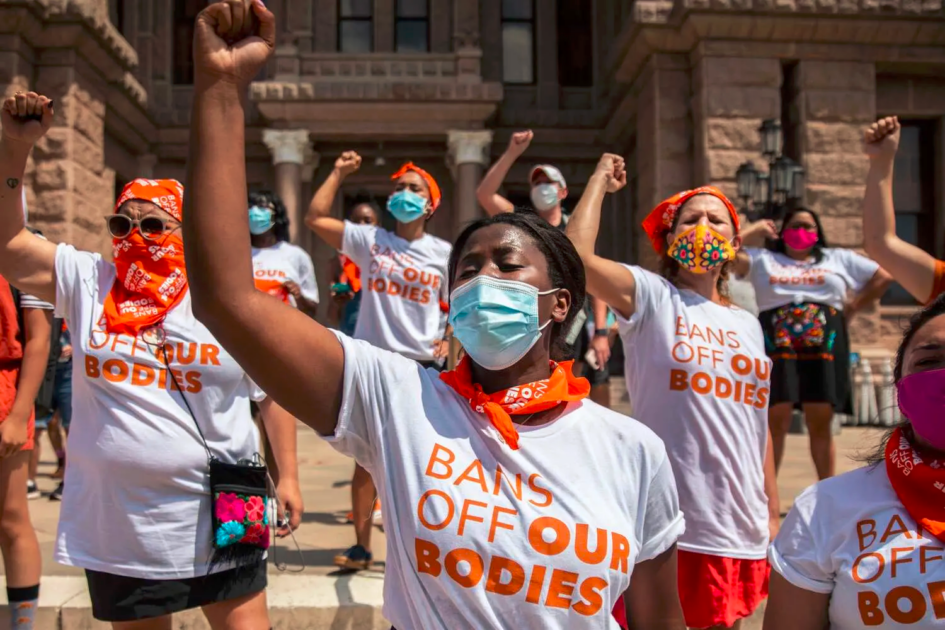 On the morning of Sept. 1, Texas residents woke up to the news that legal abortion had been declared illegal past six weeks of pregnancy by the state’s legislature. On top of this shock, another stunning blow was delivered: There would be no exceptions for victims of rape or incest! The full meaning of Senate Bill 8 and how it would impact anyone who can become pregnant shocked people across the state. The legislature had, in effect, declared dead in Texas the 1973 Supreme Court ruling known as the Roe decision, which legalized abortion in the U.S.

When the full impact of SB8 was known around the state, desperate cries for help reached clinics, both in person and on the phone. Pro-choice hotlines were clogged with calls by people asking what they should do.

Along with shock and sadness came activist organizing and offers of assistance from across the country. Demonstrations were held at the Capitol in Austin, Texas, and in Washington, D.C., outside the Supreme Court. Protesters’ T-shirts were emblazoned with “Bans off our bodies.” Donations from around the country have poured into the coffers of pro-choice organizations and funding groups that assist people with expenses for abortions, travel and housing. Local and national protests are in the works.

When the misnamed “Right to Life” organization set up an anonymous tip hotline for anti-abortion forces to report anyone who allegedly violated the law, it was immediately sabotaged by pro-choice tech experts, and thousands of sympathizers called in fake reports.

Another aspect of this outrageous law incentivizes anti-abortion groups and individuals to sue anyone who “aids or abets” a pregnant person, even a 13-year-old rape victim, in obtaining an abortion after the imposed time limit.

Such reactionary “bounty hunters” could win $10,000 for each successful lawsuit against clinic operators, doctors, nurses, midwives, receptionists, counselors, pro-choice donor organizations or individuals — even Uber and Lyft drivers who transported a pregnant person to a clinic. Executives at those companies have pledged to pay any penalties incurred by their drivers.

This bonanza would not only encourage neighbors to spy on neighbors, but it encourages anti-abortion extremists to file endless lawsuits in their quest to bankrupt reproductive health centers, their operators and staff. These vigilantes aim to close all clinics, punish pro-choice organizations, clinic operators and medical professionals, and end legal abortions altogether.

By deliberately constructing the law in this way, the state and its “executive employees” have exempted themselves from responsibility for violating people’s constitutional rights, and they can’t be sued. With SB 8, Texas politicians are “deputizing” individuals to enforce the law. They are encouraging vigilante action by anyone angry about progressive “social” or “cultural” issues.

Planned Parenthood immediately went to court to get a temporary injunction to protect its staff members from legal liability and punitive monetary fines that could result from this SB8 vigilantism.

In 1973, the U.S. Supreme Court issued the landmark ruling in Roe v. Wade which legalized abortion, defining it a private matter for pregnant people to decide. The decision recognized the legal rights to privacy and personal autonomy in making medical decisions related to abortion. In 1977 in New York City, people marched for the right to abortion with government funding, Workers World Party’s banner to the left.

But the decision defending this essential human right didn’t appear out of thin air. This victory was the result of a years-long, hard-fought movement led by women and their allies all across the U.S..

Legalization of abortions meant that women could obtain the procedures in safe, sterile facilities, performed by medical professionals. The intent by pro-choice groups and supporters, as well as health care providers, was to end injuries and even deaths of women from botched abortions, including by their own hands.

But as soon as the high court — in a 7-2 decision by a majority of Republican-appointed justices — declared the procedure legal, the right wing was sharpening its cudgels, planning how to overturn this basic right through the courts and legislatures. Some of the most extreme misogynistic anti-abortion vigilantes have resorted to stalking, wounding, assassination, bombing and other violence against medical and nonmedical staff and  clinic buildings.

The right wing has intensified its fight through courts and state legislatures to weaken Roe and eventually criminalize abortion once again. This campaign has already led to the imposition of obstacles to and restrictions on abortions in many states, making the procedure inaccessible for many people. This attack on the right to abortion has continued, despite the fact that the majority of U.S. residents support the Roe ruling.

With SB 8 the harshest legal attack on abortion rights since Roe was decided, the right wingers are stepping up their efforts to smash reproductive rights countrywide. Since Jan. 1, a record 600 bills have been introduced in 47 state legislatures to further restrict abortions. Ninety laws have been enacted this year.

Republican politicians in Arkansas, Florida, South Dakota and other states have said they would propose similar laws to SB 8 in upcoming legislative sessions.

Conservatives have schemed for years to pack state legislatures and courts and get a majority of anti-abortion justices on the Supreme Court. Now they have the majority on the high court, and five of their justices — three of them Trump appointees — just delivered a victory to reactionaries who seek to overturn the right to legal abortions.

SCOTUS issued a short ruling before midnight on Sept. 1, which by a vote of 5-4 allowed Texas SB 8 to stand. Of the dissenting opinions, Justice Sonia Sotomayor wrote the most scathing attack not only on Texas executives and legislators, but on the five justices who “silently acquiesced” to the Texas law, and ignored their obligation to protect women’s legal rights.

In what is called a “shadow docket,” the high court’s decision was handed down without signatures, prior notification, written legal briefs or oral arguments. The ruling was done in secrecy, as part of a plan to quietly gut abortion rights.

Since 85% to 90% of abortions occur after six weeks’ gestation, SB 8 is a nearly complete ban on access to abortion. Medically safe, legal abortions will be denied to most Texas residents who request the procedure. The restrictions  will fall the hardest on people who already face obstacles in seeking safe abortions — low-income, Black, Latinx, Indigenous, im/migrants, disabled, transgender, rural residents and victims of domestic violence.

The truth is that abortions have always occurred — legally or illegally, safely or unsafely. The procedures will continue, even if pregnant people have to travel far, borrow money, or in the worst-case scenario, desperately resort to back-alley or self-induced abortions.

Racism, bigotry, misogyny and further oppression of poor people are at the heart of this law and the many other state laws that create barriers to obtaining abortions. People who have economic means can obtain the abortion legally by flying out of state and paying for the procedure, hotel rentals, food and childcare.

SCOTUS let stand a law that would prohibit care to the vast majority of people seeking abortions in Texas. This is a violation of the court’s precedent-setting decision in Roe v. Wade which guaranteed the right to legal abortion. It should be emphasized that this essential right was won in 1973 through the united mass struggle of many sectors of the population.

It is time to push back all reactionary actions by the judicial arm of the capitalist state, including those which impinge on reproductive rights — and to build class unity to save these rights.

These attacks call for a renewed mass movement to fight for safe, legal abortions, with government funding for all who need it. A movement that is multinational, multigendered and multigenerational. A movement that reaches out to workers, organized and unorganized, labor unions, im/migrants, people with disabilities, LGBTQ+ organizations, civil rights groups, environmentalists, left groups, including socialist parties and all progressive forces.

She dedicates this article to late WW comrade and author, Sue Davis, who wrote about and struggled for reproductive justice for five decades.