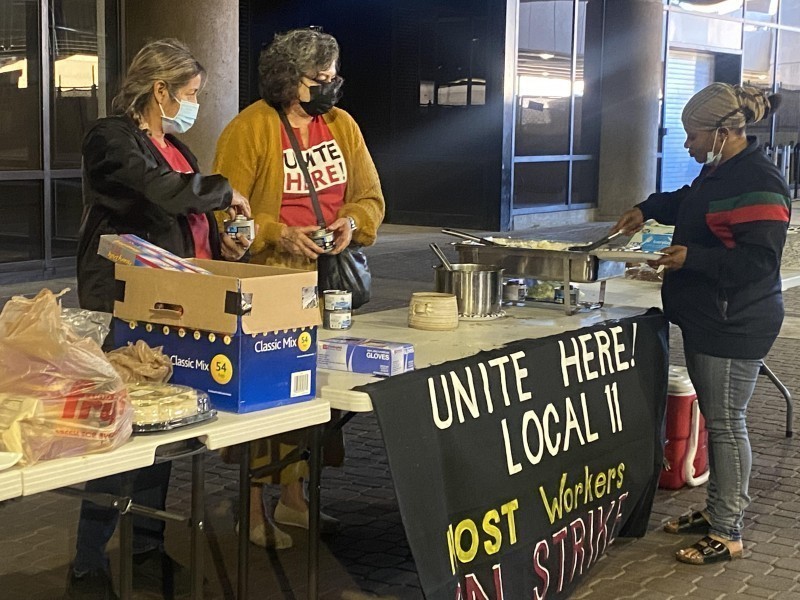 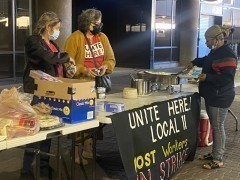 Phoenix, AZ – For many striking concessions workers, this is the first Thanksgiving they are not working. At Phoenix Sky Harbor Airport, HMS Host hospitality is the biggest concessions service, with hundreds of workers. Those workers are fed up with four years of failure from HMS to agree to a decent contract. Four days into their indefinite strike, Unite Here Local 11 HMS Host workers are fighting for a contract that includes raises, affordable health insurance, an employer-paid pension, protection for workers’ tips, and strong contract language for equal opportunity and protection from discrimination.

It should come as no surprise that these issues drove a 97% yes vote in favor of striking and to start their strike during one of the busiest travel weeks in the U.S., when corporations reap major profits.

The cooks, dishwashers, baristas, servers and bartenders on strike have severely impacted Terminals 3 and 4 at the airport. As with many airport workers throughout the country, they are predominantly from oppressed nationalities. “This company is not respecting us and not respecting our union,” said Lucia Salinas. “I don’t make enough to pay my insurance. I deserve a pension. This company has been denying everything.”

HMS operates all the Starbucks at Phoenix Sky Harbor Airport and the union workers know they’re being underpaid. “They’re proposing my base rate to be $14 per hour, so I’m not even making what the same barista at a streetside location is making,” Victoria Stahl, UNITE HERE Local 11 member and a Starbucks barista at the airport.

No thanks, Thanksgiving . . . National Day of Sorrow . . . Mourning