The Academic Proles on the Barricades 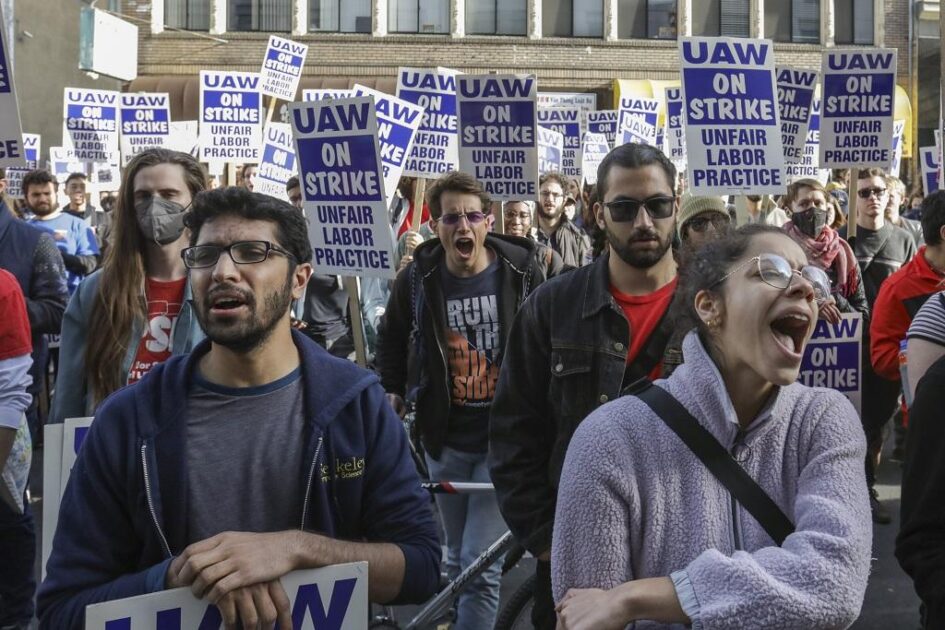 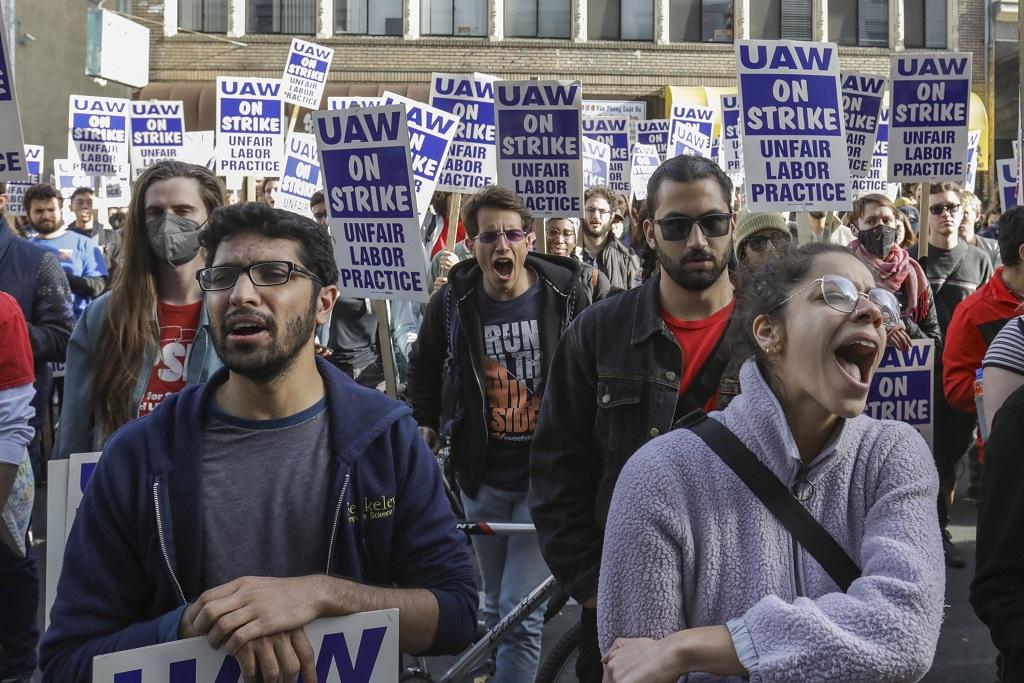 Above Photo: Vivek Bharadwaj, left, a grad student researcher, and Anisah Awad, a community supporter, chant with University of California workers in front of the UC Office of the President in Oakland, California, November 28, 2022. (Salgu Wissmath/San Francisco Chronicle via AP)

12,000 Striking Postdoctoral Scholars Reached A Tentative Agreement With The University Of California To Boost Their Wages And Benefits.

In her 2019 book Squeezed, Alissa Quart gave a name to the middle class that was just getting by in today’s middle-class-unfriendly economy: the middle precariat.

One group that may just manage to ascend, wobbily, to the ranks of the precarious middle are the 12,000 striking postdoctoral scholars who reached a tentative agreement with the University of California earlier today to boost their wages and benefits. Under the agreement, which will shortly be presented to the postdocs for an up-or-down vote, the scholars will receive raises of between 20 percent and 23 percent to take effect next year, as well as a couple thousand dollars in child care assistance. By my very rough calculations, that should put them in the lower ranks of the mid-precar, with annual incomes in the mid-40 thousands—not enough to get a decent rental in coastal California, but able to buy a good-sized car to sleep in.

But the 36,000 teaching and research assistants, most of whose annual incomes come in at around the mid-20 thousands, remain on strike, and the postdocs made very clear that they’re not reporting back to work until the TAs and RAs get a contract they can live with (if not live on, exactly), too. In a sense, the postdocs’ solidarity is in the grand historic tradition of UAW strikes against the Big Three auto companies, in which the skilled craft workers for those companies—the ones who could fix the assembly lines if they sputtered to a halt—won comparatively higher pay than their union brothers and sisters who actually worked on those assembly lines. Those craft workers often settled their contracts first, but stayed off the job until the far more numerous assembly line workers could settle theirs. As the union credo goes, an injury to one was, and still is, an injury to all.

The importance of this UC strike cannot be overstated. Like their fellow Gen Zers and millennials who work at Starbucks, the TAs and RAs are well educated and lowly paid. In this, they’re no different from the grad student employees at universities throughout the land, but by living in California, the fundamentals of a decent life—like adequate housing—elude them. They’re not even close to joining the middle precariat. It’s a mystery why anyone should think it’s a mystery that these generations are the most radical at least since the 1930s. Like the veterans of the Great Depression, they don’t need deep dives into Marxist classics to understand that capitalism isn’t working very well. As was not the case during the Depression, it’s not even working very well with unemployment at three and a half percent. An immense low-wage economy is so built in to 21st-century America that even something close to full employment doesn’t majorly diminish low-wage work.

And it certainly doesn’t eliminate it in the public sector (including for underpaid K-12 teachers), which has never recovered from the revenue losses brought about by post-1980 tax cuts on the wealthy and corporations, and in California, by 1978’s Proposition 13. California may be home to a motley crew of billionaires, but the share of UC’s income that comes from the state government’s tax revenues has been in steady decline for nearly the past half-century. That’s why this strike should be a wake-up call to the legislature and to Gov. Gavin Newsom, who, after all, appoints the university’s Board of Regents and should be at the center of the negotiations to settle the strike—which, at least to all appearances, he is not. Newsom may not have anything like sole discretionary power to raise and spend the public’s till, but he has more of that power than anybody else. If he cannot intervene on behalf of a large number of workers who are effectively both state employees and the state’s future talent bank, just what is it that he thinks is in his job description?

Russia, Ukraine at war over how to spell presidents’ name — proles hiding in complete terror

“Frantz Fanon: Philosopher of the Barricades” by Peter Hudis, Now Available as Audiobook

CAUT Says No to Academic Censorship on Palestine

No academic freedom to support Palestine