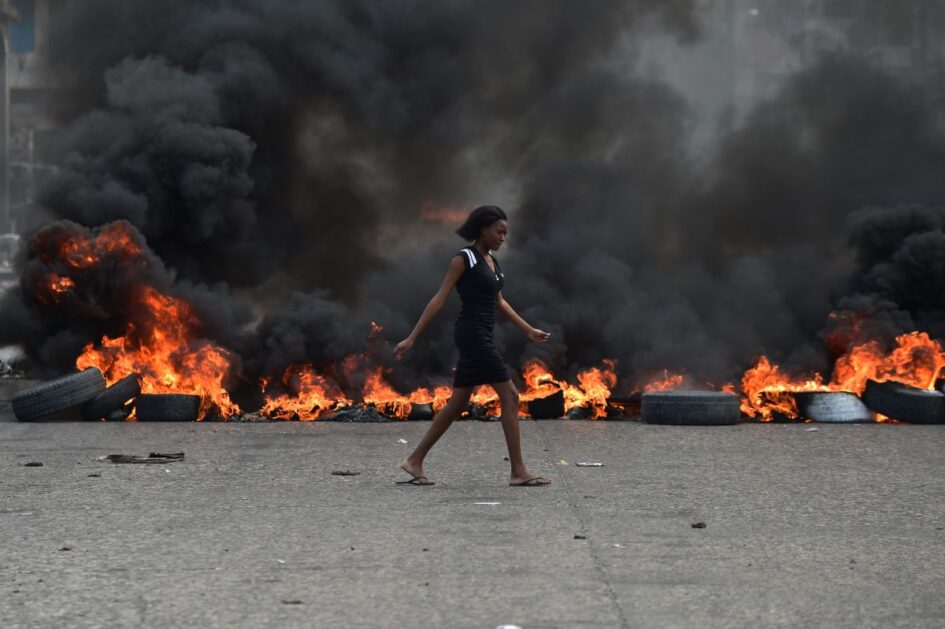 The People’s Resistance is Eternal!

There are always events reported in the mainstream media about Africa and/or nations/states where large numbers of African People live. We get daily reports about the assassination of the President of Haiti, demonstrations in Cuba, attempted assassinations of the Presidents of Madagascar & Mali, the assassination of the President of Chad, the killing of journalists in Ghana, the kidnapping of girls in Nigeria, the rebellion in Azania/South Africa, etc. Just yesterday, the USA (Uninvited Settlers of America), Commander in Chief, Joe Biden, ordered drone bombings of Somalia, sanctions against Ethiopia, and new sanctions against Cuba. The imperialist media gives us these one-sided stories to make us think that there is no meaningful resistance to their rule and domination. When the people of Haiti put thousands in the streets in years long rebellions against police terror and sellout governments, we barely hear a word. When a million come yearly to Cuba’s Malecon on January 1st to celebrate the 1960 defeat of imperialism on their island state, not a word is written.  When the people flood the streets of Lagos, Bamako, Dakar, or Pretoria to denounce Africom, SARS and Israeli trained police forces, it does not make the nightly news. Each day there are literally 10,000 meetings in churches, basements, classrooms, and open fields to discuss our fight to live free and defeat our enemies. We even stopped hearing about Black Lives Matter when the People in the street called for the dismantling of terrorist police forces.

Capitalism Lies All The Time

Our Native American comrades remind us that, “Paleface speaks with forked tongue!” This is the same reminder that our Comrade Kwame Ture never tired of saying, “Capitalism doesn’t lie some of the time, it lies all of the time!” This lying mainstream media would have us believe that African people are passive victims, standing idly by as world events unfold around and upon us. We are told to fear China, Russia, crime, and terrorism, as if we are helpless wretches pushed about aimlessly by great forces beyond our control. The media never tells anything about our resistance to this worldwide oppression and exploitation. They never mention our daily struggle to survive, our centuries old struggle to be free and united, and our permanent fight against capitalism/imperialism, racism, patriarchy, and zionism.

Yet, we know that Africans always have and always will resist exploitation and oppression. Africa is not on fire because of the actions of forces beyond our control. Africa is on fire because Africans are uniting and fighting back, just as we always have. When the world’s first Kings emerged in Africa, the masses of Africans resisted feudalism and indigenous forms of patriarchy and slavery. When the first African was captured and enslaved under the banner of Islam, Africans fought for 1,100 years to end the Arab slave trade. When Europeans brought slavery, colonialism, and white supremacy with  all the related  ills of the capitalist/imperialist system, we resisted and we continue this resistance to this very day.

If you have a correct interpretation of history, you know that any progress Africans have made anywhere, has been the result of our continuing resistance. In fact, Africans (instinctively, spontaneously) spill our blood every day,  in defense  of our rights and to achieve our freedom. It is this daily bloodletting that insures our eventual victory over capitalism and imperialism, no matter how powerful it is and no matter what the media reports. African Blood is not spilled in vain. The African Liberation Struggle is daily effort, not a daily news headline. Our task is to make the spontaneous, instinctive resistance into conscious organized resistance. We must organize the People to do what they are already doing, resist! Only now we must resist better! Now we must resist in an organized scientific manner. Our resistance must be elevated into a program designed to liberate ourselves and win power over all aspects of our collective lives.

We do not fight for space on the front page. Africans fight to liberate Africa and African People, scattered and suffering around the world. We fight to bring justice and prosperity to the whole of humanity. Although progress has been made we still have a long way to go to reach our objective, Pan-Africanism, the Total Liberation and Unification of Africa under one scientific socialist government.

Neo-colonialism is the system imperialism adopted when colonialism was destroyed. The enemy came up with this new strategy to make Africans and others think they were getting freedom when they took over the governments left behind by colonialism. What the former colonial subjects really got was the appearance of freedom without being free. We got the form without the content. Africans still didn’t gain control of their own land, communities, resources, economies, militaries, etc. The imperialists got all the advantages of colonialism (control of our resources and cheap/slave labor) with none of the risk. They did not  have to manage the state, meet any of  the people’s needs or develop the society. Neo-colonialism is dangerous because it allows our enemies to hide in plain sight. We aim at wooden puppets, shooting Pinocchio while leaving the puppet masters hiding in the shadows, stuffing their pockets with our silver and gold, which is the price of admission to the puppet show. NEO-COLONIALISM IS THE MOST DANGEROUS STAGE BECAUSE IT PROMOTES A BUNCH OF HUSTLERS WHO ADMINISTER OUR SUFFERING WHILE HIDING THE PUPPETEERS BEHIND A CORPORATE SMOKESCREEN OF LIES, DECEIT, MURDER AND SUBJUGATION.

France for example, controls the monetary systems of 14 African nation/states. These states must put their reserve currencies in French banks and pay France for doing this. The companies that control the cocoa in Ghana are not African companies and they use child labor to grow and harvest it. The companies that mine the coltan used to make cell phones and other electronic equipment, are foreign companies that use child labor to mine the mineral. AFRICOM has military bases and personnel in every African nation/state except one, Eritrea. Israeli trained police and military personnel terrorize Africans in Africa, and North, South and Central America. The biggest banks, industrial combines, mining combines of Africa, are all controlled by foreign puppeteers. These are just a few examples that show how neo-colonialism, as the main instrument of imperialism, controls Africa and much of the world.

The different governments, “Heads of State” and their political parties work in the interest of capitalism. This includes the USA, which monopoly capital controls. This was  evidenced recently by the African Heads of State giving Israel observer status in the African Union. We clearly remember when the Presidents of South Africa, Nigeria and Cameroon voted for the “No Fly Zone” that led to the bombing of Libya by NATO (North Atlantic Treaty Organization) in 2011 and the killing of our brother Muammar Ghaddafi. There are many more examples of neo-colonialism turning African governments, institutions, and political parties into puppets of neo-colonialism.

The All-African People’s Revolutionary Party believes that imperialism will find it’s deathbed in Africa. We agree with another great revolutionary Pan-Africanist, Ahmed Sekou Toure when he said, “Once you liberate Africa you liberate the whole of humanity.”  This is correct because the enemies of Africa and African People are the enemies of all suffering humanity. This is true because the capitalist/imperialist’s system depends on stealing Africa’s resource and exploiting the labor of the African Masses. Liberating Africa will end the exploitation of our people and take the resources of our land and use them for the development of our society. We will deprive capitalism of its life’s blood, cripple imperialism and eventually destroy capitalism. In this way we would contribute to the liberation of humanity.

This global system of capitalism/imperialism was built from the enslavement of African people and the colonization of Africa. It also established a network of settler states around the world. First and foremost, among the settler states is the USA. The U.S. is the dominant capitalist/imperialist nation in the world, but the United States does not represent the people who live there. The United States protects and defends only one unchanging interest, and that is the interest of monopoly capital and those who own it. In the interest of capital, the United Settlers of America controls NATO, the UN, IMF, the World Bank and even the smaller capitalist states in Europe, Asia, and the Americas. They even take the self-appointed role of the  world’s policeman, to protect private control of the world’s wealth, land, resources, markets, and labor.

You will not find discussion of neo-colonialism or the domination by monopoly capital on the nightly news. Just as you will not get any information about the ongoing resistance being waged by Africans around the world. But Africans on planet Earth just have to look around, wherever they are, to see what is going on. You will see the flunkies and lackeys fighting to be middlemen (it is mostly men) between the People and their enemies. You will see their police and military killing us in the streets or on battlefields to protect property and defend the ruling elite. Look and you will see that Africans are all fighting the same enemy and that victory for any is tied to victory for all of us. The time has come to join together as one unified worldwide fighting force.

What Must Be Done

The A-APRP understands that capitalism, imperialism, and its neo-colonial stage with its backward sexist, racist social structure are the primary enemy of Africa and African people. To defeat them, Africans everywhere must get organized. We call on all Africans, wherever you are in the world, to join an organization that is working for the people. We call on all organizations who are anti-capitalist, anti-imperialist and anti-neocolonialist, anti-racist, anti-zionist and anti-patriarchal to come together to wage a coordinated fight against our common enemy and for a better life for all Africans and the peace and freedom loving People of the world.

Yes, the African World is on Fire!

It will continue to burn until Africa is Free, United, and Socialist.

The Mediterranean is on fire