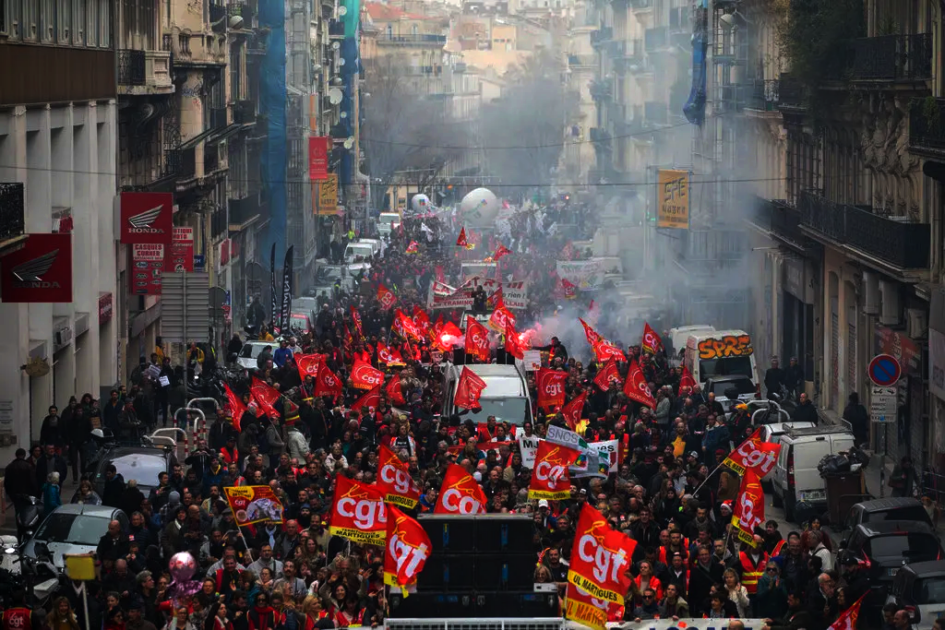 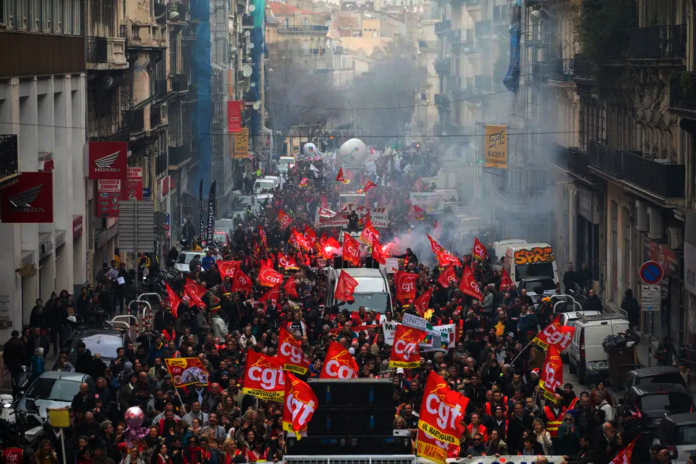 As announced during his presidential campaign, Emmanuel Macron’s government has launched its pension reform. On the agenda are: raising the retirement age from 62 to 64, and raising the minimum service required for a full pension from 41 years to 43. More than 70% of the population is opposed to this reform which aims to make everyone work longer.

We know the old argument: we are living longer, so we will have to work longer. It doesn’t matter if, at the age of 64, 29% of the poorest 5% of workers are already dead and will therefore never benefit from the pension system they have paid into all their lives. It is also unthinkable to refinance this system with more public money, which is lacking. Indeed, taxes on corporate profits have fallen from 33.3% in 2017 to 25% in 2022. This is a drop from a third to a quarter during Emmanuel Macron’s first five years in power.

The government is trying to sweeten the deal with supposedly progressive measures, such as raising the minimum pension from 900 euros to 1200 euros. Yet, taking into account all the conditions of eligibility, Mediapart (a French newspaper) has calculated that only 48 people would be entitled to it!

This reform comes at a time when the situation is already particularly inflammatory, with soaring prices hitting French workers who do not benefit from wage indexation, except for the minimum wage. And yet there is money available! On the one hand, the companies of the CAC40, the biggest companies represented at the Paris stock market, have returned a record 80.1 billion euros to their shareholders in 2022. Secondly, the 42 French billionaires share a wealth of 544 billion euros. That is another record. Finally, the largest item of expenditure by the French state is public aid to companies: 157 billion euros per year.

The Best Defense Is A Strong Offense

The country’s eight main trade union organizations (CFDT, CGT, FO, CFE-CGC, CFTC, Unsa, FSU and Solidaires) have united in a common front, something that has not happened in France since 2010 (when the retirement age was raised from 60 to 62 under Sarkozy).

At the end of 2019 and the beginning of 2020, another attack on pensions gave rise to a titanic struggle, but the lack of a bold plan of action toward a general strike led to a loss of momentum.

We need to go beyond the strategy of loosely linked days of strikes and mobilizations if we want to avoid the movement running out of steam without victory. This is what the government is counting on. It is urgent to organize assemblies of struggle in the workplaces, open to all colleagues, whether union members or not, and to organize similar committees in high schools, universities, and neighborhoods to build a general strike that can be renewed on an ongoing basis. This is how we will be able to push back the whole pension reform, but also to bring down the Macron government and its whole austerity policy.

Organizing from below is key to avoid the struggle being betrayed from the top (notably by the CFDT leadership). The strike of the railway workers of the SNCF during the winter holidays took a step in this direction. They organized from a Facebook page (“Collectif National ASCT”) to take action and to demand that the trade union leaderships fill in the strike notice. Similarly, during the refinery strike (in September and October 2022), the Total workers had led a rolling strike action, in which workers decided on a daily basis whether to continue the strike by a democratic vote. It is with this kind of method that the involvement of all the workers, and thus the success of the struggle, is ensured. The weakness of the movement in the refineries was its isolation, which allowed the authorities to impose the requisition of workers. This only underlines the need to build a movement based on the maximum involvement of the whole working class