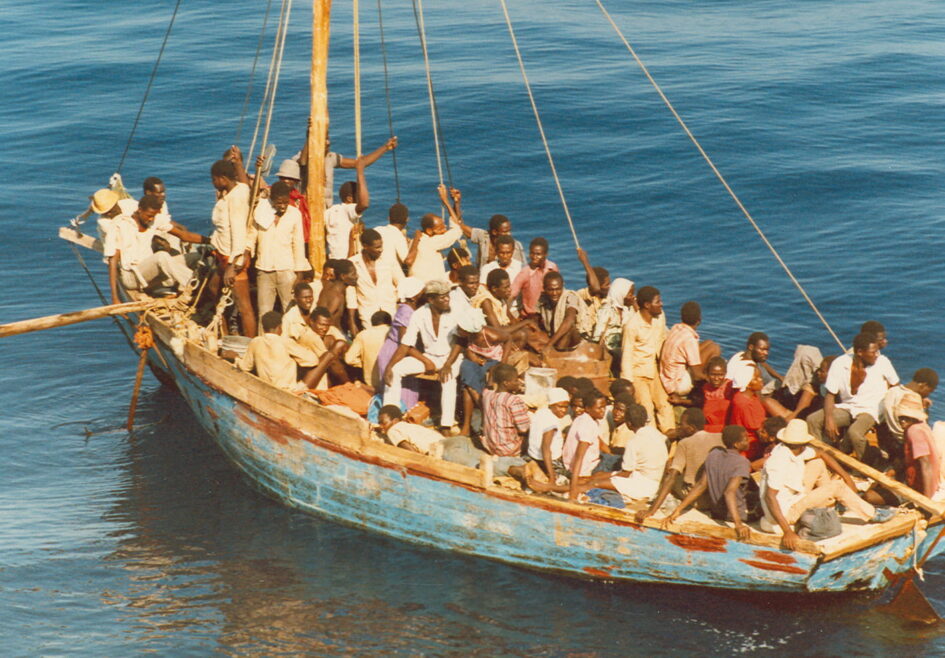 In recent weeks, the world has been shocked by images of US Customs and Border Protection officers on horseback whipping fleeing Haitian migrants with their reins. The cruelty of the scene and the respective races of the victim and the attacker evoked the imagery of colonialism and slavery. This incident was not merely an anecdote. Over the past few months, there has been a wave of immigration from the Caribbean country of Haiti. Political and gang violence are long-term problems for the country, but both have been exacerbated by the recent assassination of the Haitian President, Joseph Moïse. The US government’s response to this wave of migration was swift and violent. In just nine days, Biden’s regime expelled nearly 4,000 migrants and sent them back to their home country, where conditions of poverty and crime await them.

The far right callously dismisses Haiti’s struggles, claiming that the US has no obligation to help foreigners with “their” problems (particularly non-white foreigners). As far as they’re concerned, “America is full.” In actuality, Haiti’s problems are not disconnected from the US. The suffering of the Haitian people is not the consequence of some geographical accident, nor, as some reactionaries claim, is it the inevitable result of Black self-government. The reality is that Haiti has long been one of the most super-exploited nations in existence, leaving it severely underdeveloped, with a GDP per capita of less than $100 per month.

Haiti emerged from the first successful mass slave uprising in the Americas in 1791, a heroic endeavor for which their former French masters punished them with an astronomical debt burden. This meant that even after liberating themselves from the condition of slavery, the immense wealth created by the Haitian masses still enriched imperialist France rather than the nation itself. After an unprovoked US invasion in 1915, Haiti suffered nearly two decades under American occupation, during which the American government concentrated wealth and power in the hands of a minority of US-friendly Haitian elites before withdrawing militarily.

Border patrol is mounted on horseback rounding up Haitian refugees with whips.

This is unfathomable cruelty towards people fleeing disaster and political ruin. The administration must stop this. pic.twitter.com/BSjT91NSj0

Decades later, the country remains under the heel of imperialism. Direct colonialism has been replaced by the domination of monopoly-finance capital and unequal terms of trade—with frequent imperialist interventions and occupations. Clothing factories have popped up alongside sugar plantations, but the system of capitalist exploitation remains. Haiti’s economy is dominated by large American corporations, which take home enormous profits created by the Haitian working class. Some 80% of exports from the island go to the US, and most imports come from the US. All of this is the material basis for the desperate violence and political instability driving Haitian immigration to the US.

When President Biden was elected, many American workers hoped his presidency would benefit immigrants, although many of his more passive supporters admitted such a benefit would be minor. This crisis has demonstrated that the situation has not improved even a millimeter. Illegal immigration arrests in the interior of the US have declined sharply, but the detention of migrants at the border has seen a significant increase. In fact, the total number of immigrants in ICE detention increased by 62% between Biden’s inauguration in January and mid-September.

Despite promising to “close the camps,” Biden has done no such thing, merely recasting them as “overflow facilities” while maintaining a subhuman standard of living for the occupants. Rather than engaging in the barbaric practice of family separation, Biden “humanely” chooses to detain both mother and child in the same humiliating cages. The administration even renewed the contract on a migrant detention facility at the infamous Guantanamo Bay. At the time of writing, the facility is seeking translators fluent in both Spanish and Haitian Creole.

It is, therefore, evident that the difference between Trump and Biden is rhetorical, not material. Trump’s attitude to immigrants was openly bloodthirsty, while Biden’s is that of the “respectable” liberal. However, both presidents are the faithful agents of the increasingly desperate and narrow-minded American bourgeoisie. Biden’s efforts to avoid the scrutiny of human rights advocates may lead to worse outcomes for immigrants, as his administration attempts to jettison asylum seekers as fast as possible by irresponsibly accelerating their cases. The “new and improved” Democratic Party procedure uses an Obama-era rule to push migrants seeking asylum to the head of the line, leapfrogging immigrants who have been waiting for years, which puts new asylum seekers before a judge before they have had adequate time to prepare. Often, they do not even have time to hire a lawyer. While tens of millions of Biden voters may not approve of these human rights abuses, his capitalist backers certainly do.

In truth, borders represent a garrote around the neck of the international working class. Their real function is not security for populations in general, but security for the capitalists’ profits. The parallel between the mounted white border patrolmen and the slave catchers of the 19th century is more than just aesthetic. The division between Black and white workers serves the same function as the division between documented and undocumented workers. By brutally imposing fictitious distinctions on the working class, the capitalists can extract superprofits from the most oppressed workers while forcing the more “privileged” workers to accept bad conditions by threatening them with replacement by the cheaper workforce.

Capital, on the other hand, is never constrained by borders. In the age of modern imperialism, a capitalist can import low-cost specialists, laborers, and resources from any corner of the Earth. At the same time, labor unions, wages, and even corporate taxes are kept localized as much as possible. Global supply chains contort themselves into increasingly complex and inefficient patterns to produce goods at poverty wages while selling them at American prices. If an American union demands higher pay, the company can fire the workers and move its operations to places like Haiti, where workers can be forced by violence and starvation to accept a lower standard of living.

As the capitalist crisis deepens, the American bourgeoisie is guarding its borders more jealously than ever. The capitalist state will do everything it can get away with to ensure foreign workers are penned into countries where they can be easily exploited, and that any immigrants who get through the net are too terrorized to organize. As workers, our interests are entirely opposed to this. We must embrace an internationalist perspective, understanding that as long as any mass of workers is super-exploited, we all suffer. Rather than the petty nationalism of the current labor leadership, we need the revolutionary ideas of Marxism to take the movement forward. What we need is a class-independent workers’ party that fights against the imperialist terror of the Democrats and Republicans and for the immediate and unconditional legalization of all immigrants.

Not a Nation of Immigrants

Jobless Americans Are Stuck in Backlog Nightmare as Pandemic…

Check out the new issue of Struggle-La Lucha:Defend Haitian…