“The Climate Crisis Is a Crime with Clear Perpetrators” 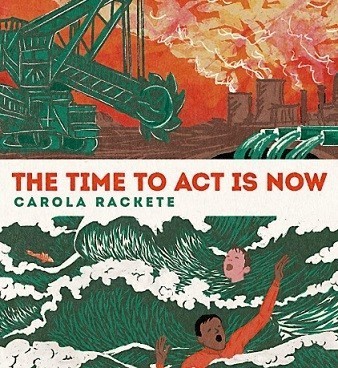 Because they both fundamentally have to do with power?

At first glance, the debates surrounding migration and the climate crisis appear quite different, but they have a lot in common. Rescuing refugees initially seems to be a much more urgent issue: if people are in distress at sea, and no help arrives, they will definitely die.

What often disturbs me about the public discourse around the climate emergency is when it discusses the younger generation, the focus is on European children. In a way, this kind of makes sense, because it is seeking to address parents and grandparents, and they might then engage with the issue more. But this makes me angry, because then I think: why are we only talking about white children?

As we speak, people of colour, adults and children alike, are dying all the time while seeking refuge, due to hunger and war and as a result of economic exploitation. And just as is the case with the climate crisis, they are not dying because of accidents, or through oversight, but because of policies consciously implemented by the wealthiest countries, under the influence of major corporations. Just like the disastrous situation on the EU’s external borders, the climate crisis is a crime with clear perpetrators.

Perpetrators who as of yet do not have to fear any consequences.

The agreements that the EU has signed with authoritarian states, and sometimes even with militias, are well-known. They are worth millions of euro. The human rights violations that occur in these places are well-known.

It’s a similar state of affairs with respect to the climate crisis: we can all see and experience the consequences of fossil fuel-driven politics. But still nothing changes. This shows how systematic the problem is — and shows the kind of colonial system we still live in, a system of white supremacy in which some lives are worth more than others, and in which many voices continue to be excluded from the discourse. You can see this happening right now: in recent months, migrants in Libya organized a kind of protest camp in front of the UNHCR offices in Tripoli, for instance. But you don’t hear much about that here in Europe.

You have also used your arrest as an example of how racist news reporting is.

Of course — when a white person is arrested, there is a huge media scandal. The controversy around this also had positive effects, however. In the ensuing months, the coalition government in Italy collapsed, and the new government revoked the country’s contentious security decree. This was the main success of the rescue mission: not that 40 people were ultimately rescued, but that this security decree was overturned and the lives of many migrants improved as a result.

Another positive was that there were now corresponding court rulings that were unambiguous in saying that Libya is not a safe port, a ship is not a safe place, and that I should never have been arrested. These are the lasting successes of this mission. Nevertheless, we still rarely talk about the people who are convicted while on the run. In Greece, refugees are sentenced to over 100 years in prison because of alleged smuggling.

Just because they held the rudder of a boat, for instance.

Exactly. 15 years in prison per other boat occupant — that’s how they end up with such absurd sentences. There are also instances of such cases in Malta or Italy, and the accused are rarely made known to the public. There are pushbacks in Belarus, Greece, and Croatia that are well-documented, where there is video evidence. All of that is public knowledge. But the people actually affected by all this remain unseen.

The protestors in Libya have received little support, even from NGOs. The UNHCR’s response after 100 days of protest was simply to close the centre they were protesting in front of and move to another location. 10 days later the Department for Combatting Illegal Migration (DCIM) gave the order to clear the protest camp. The protestors were violently transported to a detention centre.

Did the FBI live up to its pledge to bring Jan. 6 perpetrators to justice?

Confronting racism is not a crime: Defend the Colston 4

Cops want to turn cop watching into organized crime, but can they get away with it?

The Crime of Julian Assange